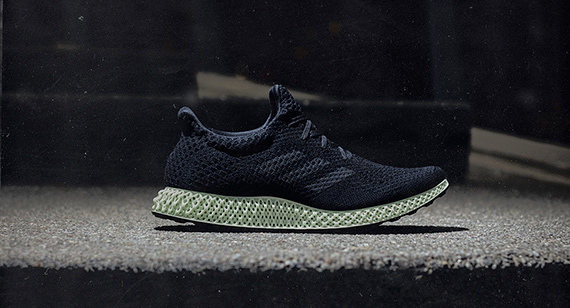 The Futurecraft 4D’s midsole, touted by Adidas as the world’s first high-performance midsole crafted with light and oxygen, is formed through 3D printing. Photo Courtesy: highsnobiety.com

The 3D-printed shoes are part of “a supply chain industrial revolution” aimed at bringing factories back to service-driven countries such as the U.S., Techcrunch.com reported in its coverage of Disrupt SF. The goal behind the manufacturing process was to be able to create the shoes very fast using materials that have the properties to be final components.

A cloud-based tool combines hardware, software, and chemistry to create a digital model that is used to 3D print the parts. According to Adidas, the 3D printing process uses light and oxygen to transform liquid into solids, forming the shoe’s single-component midsole made up of 20,000 struts that can be individually tuned to provide precise and controlled energy return.

Adidas CMO Eric Liedtke sees the 3D printing technology as a step toward an on-demand manufacturing method that would allow the company to build and print shoes optimized to individual sports and bodies. This could lead to future generations of the Futurecraft 4D shoes geared toward specific sports, or even specific athletes. The current version is tailored to provide long-lasting cushioning and stability during a run.

“In this case, we took 10 years plus—maybe 20 years—of science that we had on foot strikes, and running, and how runners run, and where the impact zones are, and what we need to design into it from a data standpoint,” said Liedtke.

While the Futurecraft 4D sneakers extremely limited production makes them hard to come by right now, Adidas’ innovative design and production process is representative of a larger trend toward the digitization of the manufacturing industry.

Eye on Innovation is a monthly look at new technology, products, and trends