Although we are nearing 40 years since the first recorded 3D printing system, it is still a relatively new manufacturing process compared to traditional techniques that have been around for centuries. As additive manufacturing technology continues to evolve, we see new 3D printing processes, materials, and applications being introduced all the time. Two months into the new year, 3D printing has already made strides in 2020. We break down some of the newest advancements and innovations below. 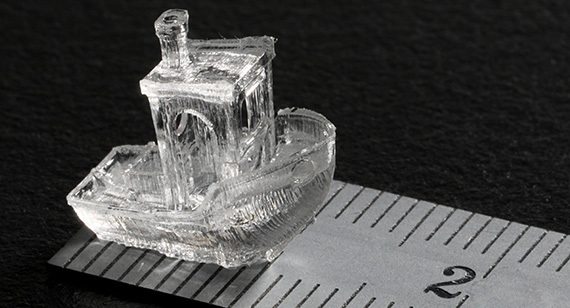 Engineers at Ecole Polytechnique Fédérale de Lausanne in Switzerland have developed a new high-precision method of 3D-printing small, soft objects. Components are built by beaming a laser into a container of translucent gel, hardening the liquid through polymerization. The process uses algorithms to calculate where to aim the beam, from what angle, and at what dose.

The entire process takes 30 seconds and is currently capable of building a piece up to 2 cm. The team envisions a wide range of uses, but says it could be particularly well-suited for biomedical applications like 3D-printed tissue, organs, and hearing aids. 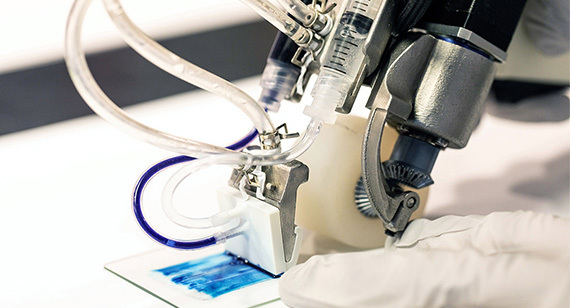 The skin printer works like a paint roller, covering an area with a uniform sheet of skin, stripe by stripe. Blue dye added here for visibility. Photo courtesy: University of Toronto

Across the pond, researchers in Canada developed a handheld 3D printer that can print skin cells directly onto the wounds of burn victims. The printer produces sheets that incorporate proteins and cells to help with blood clotting, encourage cell growth, and support the immune system that attach to and help heal the wounds. Because skin grafting, the current standard process for treating these kids of burns, uses healthy tissue from other parts of the body, the process is limited based on how severe the patient’s burns are.

"In cases where a patient has extensive full-thickness burns—which destroy both the upper and lower layers of the skin—there is not always sufficient healthy skin left to use," explained Axel Günther, Associate Professor at the University of Toronto in a paper on the project.

British scientists recently used 3D printing to answer the age-old question: What does a mummy sound like? And, the answer is "Ehhhhhh." Researchers at the University of London CT-scanned the mouth and throat of ancient Egyptian priest, Nesyamun. They used the scan to 3D print Nesyamun’s vocal tract 3,000 years after his mummification, and combined that with an electronic larynx to reconstruct "the sound that would come out of his vocal tract if he was in his coffin and his larynx came to life again," according to Dr. David Howard, speech scientist at Royal Holloway, University of London.

The quality and preservation of the actual mummification process was the key to the achievement, as the ancient embalmers were able to keep Nesyamun’s vocal tract in excellent shape. While only the single vowel sound has been synthesized so far, the team believes it lays the groundwork for recreating an ancient person’s voice. 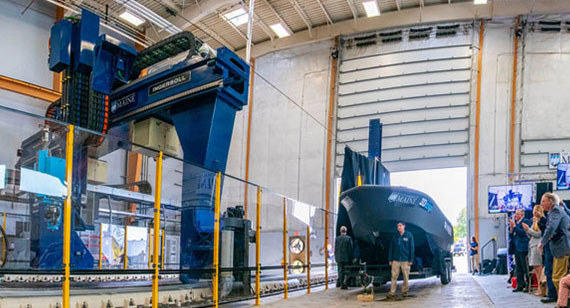 The print head was suspended above a 100-foot-track (left) to build the entire 25-foot, 2.2-ton vessel (right) in less than 72 hours. Photo courtesy: 3dnatives.com

Earlier this year, a team from the University of Maine, along with some industry partners, earned three Guinness World Records for the world’s largest prototype polymer 3D printer, the largest solid 3D‐printed object, and the largest 3D‐printed boat. The 25-foot-long, 5,000-pound patrol boat—dubbed the 3Dirigo—was printed on a MasterPrint hybrid printer using carbon fiber‐reinforced ABS resin. While a boat of this size would usually take months to construct using traditional methods, the team printed the entire ship in just three days.

The real innovation behind this project is the huge MasterPrint machine that can build objects up to 100' long x 22' wide x 10' high in as fast as 500 lbs. per hour. The printing nozzle is suspended by a large gantry above the build plane. UMaine has further ambitious plans for the one‐of‐a‐kind printer—a $20 million research collaboration with Tennessee-based Oak Ridge National Laboratory will support research in large‐scale additive manufacturing to advance efforts to produce new, bio-based materials conducive to 3D printing large, structurally demanding systems.

In 3D printing industry news, Pittsburgh is staking a claim as a global cluster for additive manufacturing. Neighborhood 91, an area in Pittsburgh designed as a campus/industrial community for firms and factories to share ideas and resources, will break ground in 3D printing starting this spring. The goal is to bring together all of the key players along the additive manufacturing supply chain, "from the powder producers to the makers of the machines to post-processing and shipping, and also manufacturers themselves, all rubbing shoulders," said Patrick Gallagher, Chancellor at the University of Pittsburgh.

Local researchers believe Pittsburgh is poised to become a global 3D manufacturing center based on the land dedicated to Neighborhood 91, its proximity to a major airport, new sources of power, outstanding universities, and the presence of promising innovative firms. Even without the dedicated zone, Pittsburgh has recently seen local investments in 3D printing including GE's Center for Additive Technology Advancement and Mill 19, a new center for advanced manufacturing innovation.

The hub is expected to create 6,000 jobs and generate nearly $2.2 billion in wages. "A cluster does two key things," said project's lead consultant, Barnes Group Advisors, in a study. "It enables process owners to focus on developing and optimizing their core process, and it creates a skilled regional labor pool."