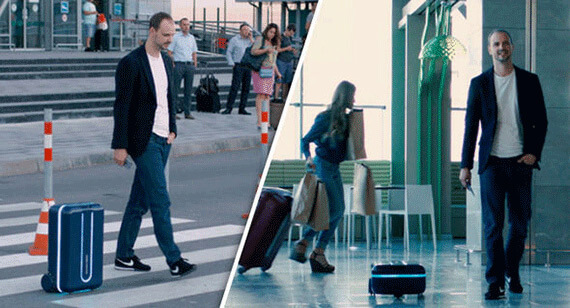 The Travelmate robot suitcase rolls along with you and can keep pace at the airport. Photo Courtesy of Travelmate.

August means vacation for lots of folks, so our hunt for innovation this month uncovers several tech items designed to help you in your travels—or future travels, given that some of these products are not yet on the market.

The Travelmate, as ZDNet describes it, is “an all-purpose robot that carries your stuff for you.” The GPS-equipped autonomous robot suitcase rolls alongside you and keeps up with you at the airport, motoring up to almost 7 mph. And you thought your 360 wheelie carry-on was cool. Estimated market launch in September. $595.

Passport Travel Adapter is billed as the world’s first fail-safe universal power adapter because of its auto-resetting fuse. Most travel adapters are still equipped with a single-use fuse. As a result, when the fuse on a traditional adapter blows, it will need to be replaced. The Passport trips and blocks the overload, and then resets itself automatically. The product is based on technology already in use in the aerospace industry. Look for Passport to launch in October. $69.

Say you’re on the go, and you need to compose a lengthy email. As ZDNet explains it, you don’t want to haul out your laptop or tap on your phone. Solution? The Kanex MultiSync Foldable Travel Keyboard, a slim, ergonomic keyboard that wirelessly connects to and switches between devices. At Amazon.com for $39.99. 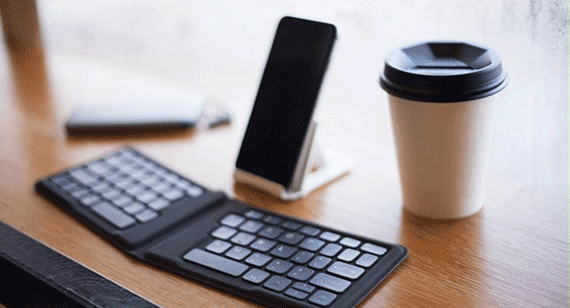 The Kanex foldable wireless keyboard is great when you’re on the go. Photo Courtesy of Kanex.

You’ll find lots of Bluetooth trackers on the market, small gadgets that you attach to important items like keys, a wallet, purse, or your travel bag. You then use an app to track those items on a map on your phone. The WireCutter blog recommends the Tile Mate. In product testing, the Tile Mate had among the best range (for both maintaining a connection and reconnecting), and its alarm is louder and easier to hear than alarms on other trackers tested. Plus, its crowd-finding feature lets other Tile Mate users anonymously help you locate items that are out of Bluetooth range of your own phone. On Amazon.com from $25.

Maybe you’re not flying or driving on your vacation this month. Maybe you’ll be on a mountain bike, pedaling swiftly along a curvy trail, or in a kayak, navigating the waves of a windy lake. If you’re out in the elements, pack your phone in the All-Conditions Phone Pocket from MAAP and Bellroy. Made of water-resistant leather, and a soft, microfiber lining, the zippered pouch holds your phone. Plus, an interior slot holds cash, a key, and up to eight cards. $109.95.