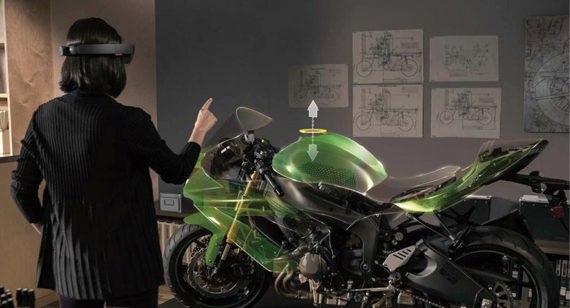 Virtual reality (VR) may be garnering a lot of media buzz these days, but augmented reality (AR) is gaining traction as a technology that offers practical applications for engineers, designers, and technicians. Big names are getting involved, too, including Microsoft and Autodesk, which have recently teamed up to pair Microsoft’s HoloLens AR headset with Autodesk’s Fusion 360 engineering design software.

Though still in the formative stages of development, AR-enhanced design software will help developers to visualize designs, view CAD model holograms, and see how new or replacement components and parts might fit on existing products. A recent article in Mechanical Engineering Magazine, for example, showed how AR allowed designers to visualize new motorcycle cladding and a fuel tank cover on an existing bike (see photo).

How does AR work?

Unlike VR, in which you put on glasses or a headset to fully immerse yourself in a virtual world, AR taps into technology to enhance the world around you. Also using glasses or a headset, AR dangles text, graphics, or video into users’ visual fields that describes, or augments, what they are looking at.

AR has actually been around since the 1990s when two Boeing researchers created a simpler way to convey aircraft wiring instructions by overlaying computer-represented text and graphics on real-world images. The engineers created a virtual service manual that eliminated the need to lug around voluminous paper manuals.

Though still in its early days, AR promises to help re-write the rules of product development.