Can 3D Printing Be a Legitimate Production Player?

If you grew up watching “The Jetsons,” you probably expected we’d all be zipping around in flying cars by now.

Similarly, if you’ve been paying attention to 3D printing, you’re probably wondering when it will truly take off beyond its prototyping origins. After all, 3D printing as a production tool has been hyped as “just around the corner” for several years.

Today, though, Airbus, Uber, even Google founder Larry Page are among those pursuing flying car projects. At the same time, commercial-grade 3D printing, or additive manufacturing, is emerging as a production method that’s stepping up to complement injection molding, machining, and other traditional manufacturing processes.

Indeed, additive manufacturing has made strides along these lines and already is in use for production and continues advancing toward even more manufacturing capabilities. 3D-printed parts are in our bodies—in dental devices and patient-specific hip, skull, and other implants. They’re on airplanes—in GE Aviation’s 3D-printed fuel nozzles and advanced turboprop engines. They’re in our cars—in structural parts, suspension components, and in BMW’s lighter-weight handheld assembly tools. 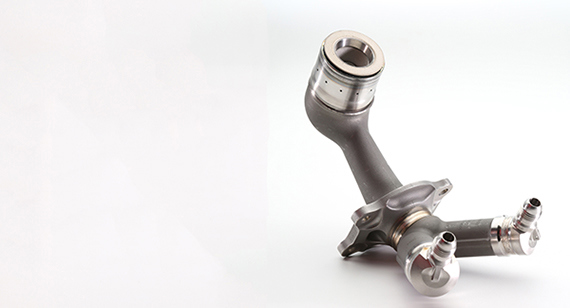 Industrial 3D printing enabled GE to reduce the number of components in this fuel nozzle assembly from 855 to just 12. Photo courtesy: GE

Yet end-use production can often mean larger volumes, too, sometimes in the hundreds of thousands or even millions, which, at least for current 3D printing processes, would not be cost-efficient beyond a few thousand parts. However, there are some use cases where volumes above a few thousand make sense. For example, the aforementioned 3D-printed fuel nozzles are a part of a new aircraft engine that GE Aviation and its engine partners have developed. GE and partners have orders to deliver 10,000 of those engines between 2016 and 2020.

Vision: Where We Want to Be

Where does the manufacturing industry want commercial-grade 3D printing to go? What would production-level 3D printing look like?

It’s a world where 3D printing gets equal consideration with traditional manufacturing services. In some cases, 3D printing can replace conventional methods for certain applications and help companies uniquely solve challenges such as intricate geometries that cannot be molded effectively, and for multi-part assemblies that can be produced more economically by being 3D printed rather than molded and assembled.

However, it’s doubtful that 3D printing will ever completely replace traditional manufacturing technologies; rather it will augment the conventional options, serving as another production resource. And in the industry’s vision, material costs will drop while production scale and speed increase and material properties expand to accommodate a growing number of uses.

The future of 3D printing is all about applications, said Michelle Bockman, HP’s Global Head of 3D Printing Commercial Expansion and Development.

“We know in a broad sense that 3D printing is going to transform the $12 trillion global manufacturing industry and change the way the world designs and produces, but there’s a lot of road between here and there, and that is paved by applications,” Bockman said.

While new applications have begun to reinvent industries from automotive to health care, that will need to keep happening on an increasingly larger scale, with deeper and more diverse implications and across more industries and nations for industrial 3D printing to realize its full promise, Bockman said.

One example of what Bockman envisions is that surgeons will someday be able to create custom, true-color, three-dimensional replicas of human hearts for surgical planning and prep, printed just a few feet from the operating room.

“This alone will improve the outcomes for millions of patients and save countless lives,” Bockman said. “It’s hard to imagine a better inspiration than that.”

What does this mean for customers/end users? It means new entrants with new investment and deep expertise are coming to the 3D printing segment. Plus, in an open platform environment, suppliers like BASF can offer more choices quicker and more affordably to end users. That will open up more application possibilities and support higher-volume production. 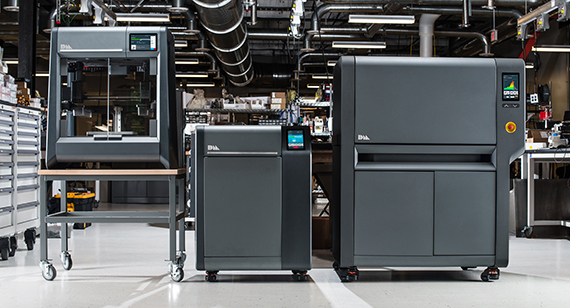 “It’s our expectation that we’re all marching in the same direction toward this opening up into production,” Noack said.

“We’re seeing end users build up dedicated teams and businesses around additive for production,” Noack said. “That’s happening across industries, some faster than others. We’re really encouraged by a number of industries taking an active role in pursuing production opportunities for additive.”

More automation—beyond systems that allow users to upload CAD drawings to have parts produced—will be key, said Todd Grimm, a consultant and additive manufacturing industry veteran. That includes making information more easily available on the benefits of 3D printing and what materials and printing processes go in to making a good part, depending on the project.

Manufacturers of 3D printing equipment, meanwhile, continue efforts to automate the operational process of their equipment. Service bureaus that manufacture printed parts are also striving to automate post-processing operations such as sanding or removing supports from 3D-printed parts. That will save on labor while improving speed and efficiency for production.

Capturing even 10 to 20 percent of the huge market for manufactured parts would make the investment in and effort for 3D printing for production worthwhile, Thompson said.

“In terms of timing, we’re probably further out than we’d like to be but closer than we know,” Thompson said of realizing the vision of 3D printing as a production option. “We’re not there yet, but I firmly believe we can get there.”

Indeed, new high-speed industrial 3D printers from Carbon, HP, and Desktop Metal are enabling a new era of productivity that will soon democratize and localize production as they become more widely available, according Ric Fulop, CEO and co-founder of Desktop Metal, which makes metal 3D printing systems that go from prototyping to mass production.

Fulop wrote in a recent blog post that, at the end of this century, “as we look back on how the Fourth Industrial Revolution changed things, we will see mass, borderless production via 3D printing presses as one of the crucial, enabling technologies that drove productivity, economic growth, and prosperity.”

These companies are working on commercializing industrial-grade additive equipment that further increases thru-put, reduces costs, and provides more material options. Localized manufacturing in this instance refers to producing end-use parts on demand and in close proximity of where they will actually be assembled and sold—as compared to some traditional models where parts are manufactured in China, assembled in Thailand or other countries, and sold in the U.S.

Reality: Where We Are Now

3D printing for prototyping parts for form, fit, and function testing is nearly universal at this point. For most schoolchildren, the first manufacturing technology they’ll get exposure to is 3D printing. 3D printing, CAD, and robotics are widely taught, elementary through high school.

Notable higher education 3D printing-related opportunities include the new Academic Additive Manufacturing Center at Arizona State University’s Polytechnic School in Mesa. For engineers, designers, and executives to understand how and when to leverage it, an online course in additive manufacturing for innovative design and production is available from Massachusetts Institute of Technology xPro online course program for professionals. MIT collaborated with digital manufacturer Protolabs on this program.

Beyond the educational component, additive manufacturing, as mentioned, already is in use for production in medical technology, aerospace, automotive, and other industries. Though, in a typical scenario, 3D printing complements traditional manufacturing with additively manufactured prototypes that ultimately get machined or injection molded until quantities support investing in high-volume production tooling.

Moving into end-use production with 3D-printed parts instead, however, can enable companies to bypass those traditional manufacturing processes to print parts that perform as well or better and do so cost effectively enough to delay or eliminate further tooling investment if total part quantity remains in the thousands, or lower (vs. tens or hundreds of thousands). Production with 3D printing also supports mass customization or personalization of parts, such as the 3D printing technology that enables the production process of clear dental aligners, an alternative to traditional braces that orthodontists reportedly prescribed to nearly one million users in 2017.

HP’s Bockman sees 3D printing at a major inflection point where advances in the technology, economics, and applications are aligning to accelerate large-scale 3D manufacturing as “the new face of industrial production.”

Just two years after HP launched its 3D printing business, it has built that portfolio into a growing global business, according to HP’s Bockman. “The pace of innovation and change being driven by 3D printing just keeps intensifying.” 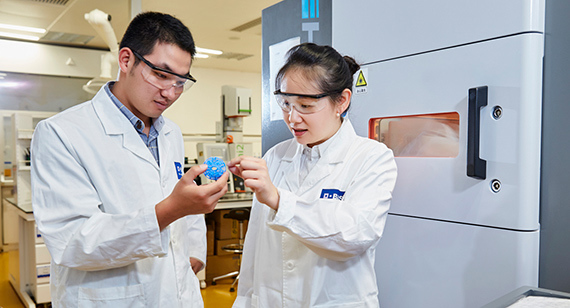 The polymide-6 powder developed through a collaboration between BASF and Farsoon is just one example of how the 3D printing industry is working together to develop production-grade materials and processes. Photo courtesy: BASF

“That’s opening up the application opportunities,” Noack said. “We want to bring the best end-use solution to the customer and we’re pretty agnostic on how we get there.”

BASF also is focusing on affordability as a driver of expanding 3D printing as a production option, Noack said, which end users say, “has to improve across the equipment and materials and other parts of the ecosystem.”

Noack added, “It’s BASF’s philosophy to drive volumes with affordability. So we’re trying to sell directly to our end users where possible or at least offer them attractive incentives to enable those production-type aspirations they have.”

Speed is another advantage of 3D printing. In some cases, for example, parts can be shipped within 24 hours from companies like Protolabs, which offers rapid prototyping and on-demand manufacturing in additive and traditional manufacturing processes. In fact, beyond machining, molding, and sheet metal fabrication, Protolabs offers five 3D printing processes: stereolithography, PolyJet, selective laser sintering, Multi Jet Fusion, and direct metal laser sintering.

Collaboration among major industry players, as described earlier, has to continue to drive technology and materials forward for industrial 3D printing to take its place fully alongside and as a complement to traditional manufacturing processes.

But design teams must accept the challenge of designing for additive manufacturing from the outset and leverage it at various points in development and manufacturing.

Parts designed for 3D printing from the start will realize the greatest value at production levels, consultant Grimm said, rather than those adapted from a design for injection molding. Instead of ordering large part quantities out of habit, Grimm also suggested switching from high-volume traditional manufacturing to on-demand 3D printing to take advantage of the flexibility to change a design more quickly while minimizing inventory costs.

According to Protolabs’ Thompson, the four forces that need to converge for 3D printing to reach production are:

Indeed those identified forces are keys to 3D printing’s advances into final-production capabilities. So while 3D printing remains the go-to process for prototyping, additive technology will continue to also move forward to eventually be another production method of choice for those product developers, designers, and engineers seeking innovation.

The investments being made in further advancing 3D printing processes and materials are exciting to see. These investments are paving the way for 3D printing to become an even larger player in the multi-billion dollar manufacturing industry.