Designing with Moldability in Mind

Intelligence does not automatically equate to experience, and in hardware, product development experience goes a long way.

I was recently hired to take over management of an engineering team at an early-stage company. A team of mechanical, electrical, and firmware engineers was already in place, and while I noticed they were younger than most teams I’ve managed before, I was incredibly impressed with their intelligence and creativity. That energy of young and enthusiastic engineers was a convincing factor for me to accept the position. 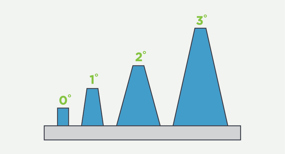 Adding draft angles to design helps facilitate ejection of a part from a mold, and improves overall moldability. The exact degrees of draft angles are dependent on part geometries.

An Introduction to Manufacturability

Since the team had already released products to customers, I took a passive approach and just observed the established processes while they worked on the next version of the product. I injected comments and feedback on occasion, but trusted them to repeat their existing methods as they prepared for production. However, the more I got involved in reviewing the designs, I realized there was a common theme across the younger engineers—moldability was not factored into their designs. Many of the mechanical prototype parts coming off the Stratasys desktop 3D printer were designed to satisfy the performance requirements, but would at best, be expensive to manufacture, and at worst, impossible..

I took several of the MEs aside and asked a few direct questions challenging them on how they envisioned an injection mold being designed for their parts. Blank stares were the only answers I received. I pointed out that one design had an undercut and another had no draft angles for clean part ejection. Again, blank stares. That’s when I realized that these engineers had become trained on producing parts using 3D printing tools only. While 3D printing has a made tremendous impact in prototyping and even production-grade parts, it also has its caveats.

I gave a brief tutorial to the ME team on the basics of injection molding—how to design parts for moldability and some common pitfalls to avoid. While my lecture did seem to be resonating with the team, I realized nothing is better than actual examples that one can hold in hand. 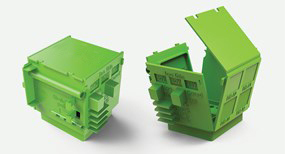 Thinking back to when I was learning about injection molding myself, I remembered the Protolabs’ physical design aids being incredible educational tools. They allowed me to study them at my own pace and focus on topics relevant to what I was working on. The design aids are well calculated for one to study and learn from without requiring a lot of instruction or supplemental tutorials. The parts include many nuances that demonstrate how molds and slides worked, the value of draft angles, common issues to consider, and even selecting locations for ejector pins.

I immediately ordered several full sets of (free) design aids for the team and distributed them among the engineers with only a brief explanation. In a surprisingly short time, the MEs were revamping their designs and presenting solutions that where much more mature and better suited to be manufactured. Some parts still needed a few more revisions, but at least now we were speaking the same language when I gave feedback. When more clarification was necessary, I always reverted to the design aids.

Now, when it came time to upload our CAD designs to Protolabs, the interactive quotes with design for manufacturability (DFM) feedback that came back further reinforced what the design aids were teaching my ME team. If any areas were lacking draft or had a risk of sink, for example, the design analysis would identify that and we could adjust according. Ultimately, when you pair physical design aids that educate with the checks and balances of the virtual design DFM analysis, your team’s chances of developing and launching products with speed and efficiency only improve.

Michael Corr is an engineering manager with more than 15 years of experience building and manufacturing various hardware products. Over the span of his career, he has developed telecom equipment, clean tech products, wearables, and most recently commercial grade UAVs. With a focus in manufacturing, Corr has spent a significant amount of time managing production both in the U.S. and overseas and has incorporated a lot of his experience into design for manufacturability best practices. Corr currently manages his own manufacturing consulting firm, DuroLabs, based in Los Angeles.