DUCK! Redesigned to Quack Again on New Season of BattleBots

“BattleBots” is the Olympics of the robot-combat sports world, says Hal Rucker, referring to the on-going television series that features fighting robots, which kicked off a new season earlier this month on the Discovery Channel and Science Channel.

Rucker should know. The San Carlos, Calif.-based freelance product designer/inventor has been a “BattleBots” contestant for several years, first with a robot called Ringmaster, and last year with a battling robot named DUCK! For this year’s season, Rucker crafted an upgraded version called DUCK! 2.0.

Throughout his time creating and driving fighting machines, Rucker has turned to Protolabs for our manufacturing expertise, using several of our services for various components: 3D printing, CNC machining, and sheet metal fabrication. We’re also a proud sole sponsor of DUCK 2.0!

Rucker’s DUCK! battled valiantly last season, just narrowly missing qualifying for the final round of 16 bots. In the process, DUCK! emerged as a fan favorite, many of whom expressed disappointment on social media in DUCK! not advancing.

One fan commented that Duck! was a “highly underrated bot. Probably one of the most versatile and tough ones out there.”

Another fan expressed the sentiment of many: “You may not have made it to the championship, but as far as we’re concerned, you’re the people’s champion.”

The series’ new season of robotic, motorized, smackdown action will run for 16, two-hour episodes, which will be shown in two blocks of eight episodes with a mid-season break. A total of 69 robot teams are participating this year, including one robot named Marvin, which is the creation of Hal’s 14-year-old daughter Hannah. She had previously worked with Hal on his robots before branching out this year to form her own BattleBots team.

We recently chatted with Rucker about his new warrior, DUCK! version 2.0, as he gears up for the new season.

What did you learn from last season, what adjustments did you make?

DUCK! was a rookie last year, and after a couple of matches against real opponents in the real BattleBox, we quickly discovered that our wheel shafts were not strong enough to survive direct hits and our front plow would bend and break at the welds.

Regarding strategy, we learned that the judges were strictly interpreting the rule that states damage points can be scored only when the damage is the result of the use of the bot’s primary weapon. So DUCK! had difficulty winning damage points with its defensive plow.

Our goal with the redesign for the new season was to address the mechanical and strategic problems we encountered last year. So we:

Why did you want to compete again?

The best teams from all over the world participate, and we love the challenge of competing with them. It’s difficult to win the Giant Nut with a non-spinner like DUCK! (many of the robots have a zero-turn radius, spinning feature) but we’re optimistic we will put on a good show with some entertaining matches.

What challenges did you face building DUCK! 2.0? 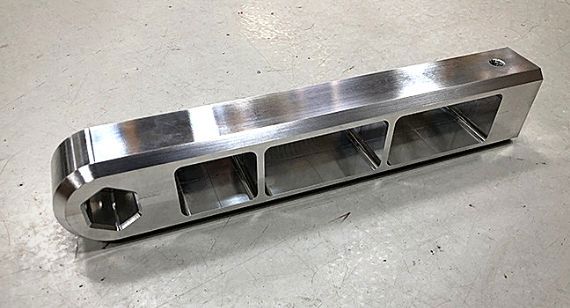 Several components inside DUCK! 2.0, like the weapon plow arm (pictured above), were milled from aluminum in order to provide high strength and save on weight.

BattleBots robots have a 250-lb. weight restriction. We wanted to make the drive shafts and the whole plow assembly stronger, but that meant adding weight. So for every pound we added, we had to find a place to lose a pound. This was a difficult challenge because we had already shaved off weight where we could in last year’s version of DUCK! We went to extremes to lose weight, including turning and milling material off every motor and gearbox.

Why did you use Protolabs again?

Protolabs was a fantastic partner last year, so naturally we asked them to sponsor DUCK! 2.0 this year. The build time is quite short, and our team is relatively small, so Protolabs has become essential to our ability to make a durable BattleBot quickly. Great parts. Always accurate. Super fast.

Working with Protolabs is a pleasure for three reasons:

Protolabs gives us a competitive advantage because of its speed, accuracy, and reliability. Upload a file and receive parts in a few business days. In addition, Protolabs has a variety of services using many different materials. For example, DUCK! 2.0 has 3D-printed plastic parts, aluminum sheet metal parts, steel parts turned on a CNC lathe, and aluminum parts fabricated on a multi-axis CNC mill. All made by Protolabs.

What are you most excited about as you start the new season?

We're looking forward to finding out how well our improvements to the design of DUCK! will help our team succeed this season. The robots get better and more destructive every year, so we have to work hard to keep up with the evolution of the designs and the new technologies inside.