Giant robots from U.S. and Japan faceoff in ‘duel’ that may lead to an eventual fighting robot sports league. 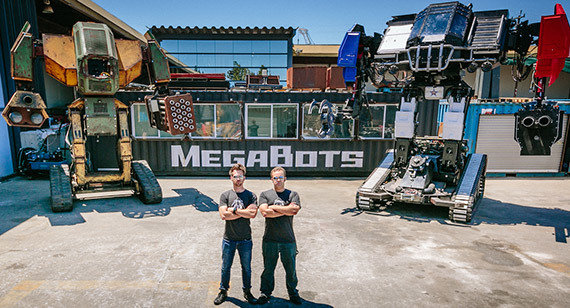 The founders of MegaBots and some of their creations. Photo courtesy: NPR

It was a battle two years in the making, a duel between giant robots from the United States and Japan.

Two years ago, MegaBots, an American robotics company, challenged its Japanese rival, Suidobashi Heavy Industries, to a duel between their giant robots. After much back-and-forth discussion, rules making, and conditions setting, the match finally occurred in September in an abandoned steel mill in Japan.

We won’t reveal the winner, because the duel was taped and is available at the online network Twitch, and, as NPR recently reported, interested viewers will be able to watch multiple rounds of fighting before a winner is determined when one robot becomes incapacitated.

The event was truly a battle of heavyweights—more like robotic monsters, really:

Gui Cavalacanti, MegaBots’ co-founder, told NPR that it was both “awesome” and “terrifying” to co-pilot the huge Eagle Prime robot. He and co-pilot Matt Oehrlein were actually inside the robot controlling where it went, what its arms and legs did, and deploying a range of weapons, from cannons to a chainsaw.

At Protolabs, we’ve seen this growing interest in designing and building fighting robots through our involvement last year with two teams that participated in ABC-TV’s BattleBots. The teams turned to Protolabs for prototyping and end-use parts for their warrior robots.