Posted On December 3, 2018 By Angelo Gentile 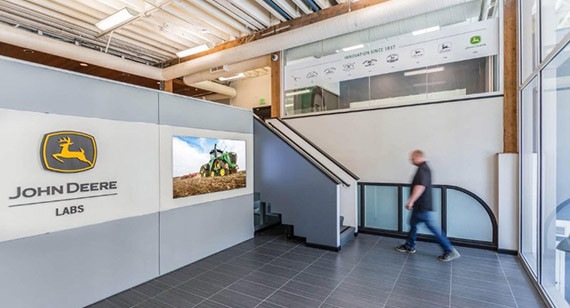 Our hunt for innovation this month takes us to the streets of San Francisco’s South of Market neighborhood, home of dozens of tech startups and major software and internet companies such as LinkedIn, Twitter, and … John Deere?

Well, yes, actually. The iconic farm machinery manufacturer is still headquartered in Moline, Illinois, but Deere & Company opened John Deere Labs this past spring in San Francisco as a sort of tech outpost that will strengthen its focus on precision agriculture—the use of technology to target crops and soil for optimum productivity and health.

The San Francisco Chronicle reported in September on John Deere Labs’ first major deal. It paid $305 million to acquire Blue River Technology, a Sunnyvale, California startup developing farm equipment using computers and robotics to automatically detect every single plant on a farm. Some of Blue River’s employees will join the San Francisco lab, which is expected to include eight to 15 staffers.

Alex Purdy, director of John Deere Labs, told Fast Company, “What Blue River Technology allows us to do is move to the plant level, and start managing at that plant level. That’s going to be transformative in agriculture both in terms of yield but also in terms of cost for growers.”

As a manufacturing source for several farm equipment OEMs, we’ve watched with interest the industry’s growing use of technology and its pivot to precision agriculture, including the development of self-driving and all-electric tractors, the emergence of more robust and precise satellite navigation systems, the use of IoT-based water management systems, and the rise of agricultural drones.