Lego: Thinking Outside the Blocks

We’re fascinated by The Lego Group at Protolabs. A company that began in a quaint Denmark village inside a carpenter’s workshop has grown into one of the largest toymakers in the world with an estimated worth of nearly $15 billion. They’ve built their brand with innovative product lines, video and board games, films, theme parks, retail stores and other extensions that have helped create a Lego culture of young builders as well as nostalgic adults who personify the creative spirit that Lego inspires.

When you delve even further into the world of Lego, you find a team of master builders who the company describes as “highly trained and super creative builders who design all of the official sets” and “detailed sculptures out of Lego bricks” for its theme parks and events. They also work with external Lego Certified Professionals comprised of adult hobbyists who are involved in everything Lego from animated models to architecture design to touring art exhibits. There is even a contingent of 100 Lego Ambassadors from 30 different countries repping the Lego fundamentals of “active participation, enthusiasm and professionalism.” 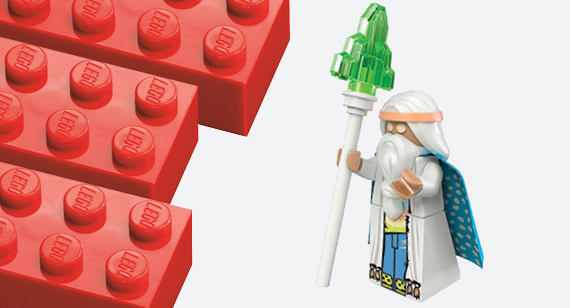 Now, imagine the excitement of Lego enthusiasts when a major motion picture (that catered to that culture) was announced. For those unfamiliar with “The Lego Movie” that was recently released, it’s a story about an ordinary construction worker named Emmet Brickowski who unwillingly stumbles into possession of the Piece of Resistance. The mini-figured protagonist is summoned by our old friend Vitruvius (see cover story) and his league of master builders, “including, but not limited to,” Batman, Green Ninja, the Mermaid, Michelangelo the artist and the Ninja Turtle, Shakespeare, Superman, Green Lantern, Abe Lincoln, the 2002 NBA All-Stars and 1980s-something space guy. With their help and the Piece of Resistance in hand, Emmet sets out to stop evil President Business from making everyone in Bricksburg follow the instructions. Animated hijinks ensue.

Amongst the film’s messages is this: When you divert from the common path and take the road less traveled when building something, imagination can flourish. Sometimes you have to break it apart, iterate and build it back up into something new to achieve innovation. The cinematic master builders are able to take a pile of blocks and make something never before seen, without instructions. The real-life master builders at Lego do this in the play set designs that eventually hit store shelves.

It’s an ingenious parallel with a lesson that can be applied to developing inventive new products. The designers and engineers who we manufacture parts for at Protolabs are able to take everyday items, and look at them with completely different eyes. We’ve helped build screwdrivers that can be configured into 168 positions, garage door openers that provide instant access from around the world, Braille labelers for the visually impaired. And though we don’t manufacture Lego pieces, we did welcome the chance to make thousands of oversized plastic bricks for a company building a life-size F1 race car model.

So go find your pile of gears, or hinges, or casings, or brackets, or Lego blocks, and make something different.