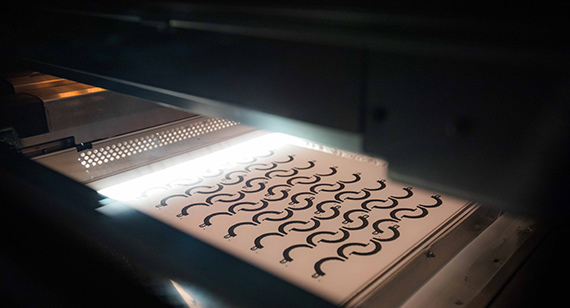 The Multi Jet Fusion process starts by applying fusing and detail agents to a bed of nylon powder. Heating elements then pass over the powder bed to fuse each layer.

Dreaming of what could be is always fun, and that’s been the case over the past decade with industrial-grade 3D printing, also known as additive manufacturing. The grand promise of 3D printing as a manufacturing game-changer has always been a central theme of that dreaming. There are plenty of examples that point to this future.

In the automotive world, we know that some carmakers are reducing component weight through building parts using stereolithography, and then adding a protective metal coating on the thermoplastic-like parts, such as a motor mount. Also, one test-phase example involves several six-cylinder engine blocks, which were reportedly built by additive manufacturing for a major European automotive OEM that are now running around Germany’s Autobahn.

In the medtech world, recent articles have reported on 3D-printed casts that help set and repair broken bones and other injuries. Though no product has yet to hit the market, a number of companies around the world are working on this new technology. And, of course, 3D-printed body parts are also often cited as an example of the technology’s potential.

With a more practical outlook, many innovative medtech companies are using 3D printing in a variety of ways: prosthetic components, surgical instruments, operating room equipment, and dental braces and retainers are just a few examples. 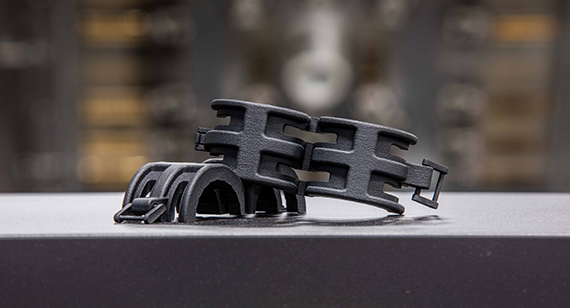 One newcomer to this landscape is Multi Jet Fusion (MJF), which was launched last year by technology giant HP Inc. MJF builds nylon prototypes and end-use production parts faster than comparable processes, and with detailed precision and improved isotropic mechanical properties over processes like SLS.

Protolabs was one of a handful of sites that tested the technology before it hit the market. We worked with HP’s R&D team to fine tune the process in order to consistently produce high quality parts in the testing phase. However, we are a technology agnostic company, meaning that we choose and use equipment that we feel is best suited for our customers’ parts, using a range of machines from a number of manufacturers.

In other words, we were under no obligation to use HP’s product after testing was completed. We did find through that testing that MJF is an efficient technology. So, in August, we added the process to our production capabilities. With the addition of MJF, we now offer five different industrial-grade 3D printing processes.

How Does MJF Work?

The technology uses an inkjet array to selectively apply fusing and detailing agents across a bed of nylon powder, which are then fused by heating elements into a solid layer. Once a layer is built, a fresh layer of powder is distributed on top of the previous layer and so on until the build is complete. As with any 3D printing process, MJF does produce some stair-stepping on oblique angles. In addition, material selection is limited. MJF for now uses only PA12 Nylon.

Overall, though, MJF is similar in many ways to other, more tested, additive manufacturing technologies, offering predictable part quality and possessing design rules that are well understood by engineers and product/part designers. What is different is its ability to make accurate parts with improved isotropic mechanical behavior, and, at least the testing indicates, it can make those parts more quickly than other 3D printing methods.

Ultimately, companies should consider this technology as yet another tool to potentially select from, especially when they look to contract manufacturers like my company to produce parts for prototyping, functional and regulatory testing, and, in some cases, end-use production.

For now, MJF does a great job with assemblies, living hinges, snap fits, and pin hinges. And, as I mentioned at the beginning, MJF, like 3D printing itself, holds promise. Reportedly, HP claims that this technology may one day allow the printing of ceramics, metal, and even electronic circuitry, opening the possibility of printing sensors and other Internet of Things (IoT) devices directly into finished parts. Like I said at the beginning, dreaming of what could be is fun.