In an effort to advance its goal of creating commercial home robotics that can work with people where they live, Toyota announced a partnership with AI startup Preferred Networks. The partnership will use the automaker’s Human Support Robot (HSR) robotics platform that was created in 2012 to develop a simple robot providing basic care and support assistance, such as collecting and retrieving items and offering communication capabilities. 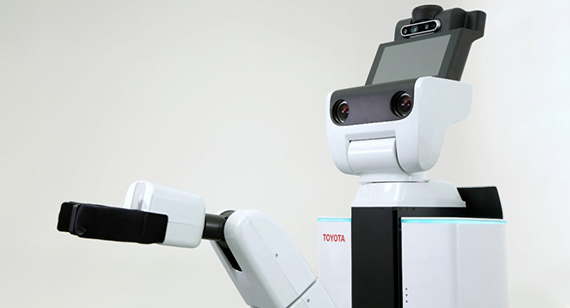 Equipped with one arm, a display, and cameras on a wheeled base, the HSR is primarily intended to provide basic care and support assistance in nursing and long-term care situations. Photo Courtesy: Toyota

Preferred Networks was tapped by Toyota to accelerate the project from design to reality. It is a logical fit as the two companies worked together on driverless vehicles in the past and even collaborated on an autonomous robot at Japan’s CEATEC conference last year. The Tokyo-based startup was founded in 2014 with a focus on artificial intelligence and deep learning and is working toward developing useful service robots that can assist people in everyday life.

“Up to now, HSR has been used in research and development at 49 organizations in 13 countries including Japan, and [it] has been highly praised as a robotics platform,” said Nobuhiko Koga, Chief Officer of Toyota’s Frontier Research Center. “Going forward toward our goal to develop service robots that better cater to the needs of our customers, we are excited by the prospect of collaborating in research and development with PFN, which boasts world-class intelligence technologies.”

The two companies will spend the next three years collaborating in R&D, with Toyota lending several HSRs to Preferred Networks. The two companies are also free to use any results from their joint research as they see fit, in hopes to fast-track development.

Toyota sees its robotics platform as part of its overall effort to transform itself and adapt to new technology, aiming to have the robots in homes and hospitals throughout Japan, supporting one of the world’s fastest ageing populations. The HSR will also be used at the 2020 Olympics in Tokyo, helping with simple tasks such as fetching drinks for spectators.