Posted On December 3, 2017 By Angelo Gentile

Our hunt for innovation this month leads us to “a galaxy far, far away.” That’s right, we’re one month away from the new Star Wars movie, “The Last Jedi,” so the timing is right.

As the movie’s Dec. 15 opening approaches, a long list of related products and merchandise are being released, most of which are fairly ordinary. Here are three items, though, that are positively stellar. They fit with our search for innovation—almost as if Yoda had instructed, “Innovate, you must!”

Star Wars as an Augmented Reality

As several news outlets have reported, the best use of technology in a new Star Wars toy goes to the new Jedi Challenges experience. It is augmented reality that works with your smart phone slotted into a Lenovo Mirage AR headset that is reportedly easy to set up. Get ready for light saber battles with Kylo Ren and Darth Vader—good luck! Oh, and clear all breakables from your living room or basement. 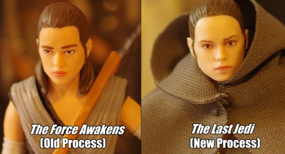 Toymaker Hasbro is using a new paint technology that has produced Star Wars action figures that are more realistic looking than previous versions. According to Geek.com, Hasbro representatives say that the action figures were previously painted using a stamping system. The new process uses a printer-like inkjet process to produce much finer details.

Luke Skywalker may have thought the Falcon was a piece of junk in the very first Star Wars movie, but the updated Ultimate Collector Series Millennium Falcon Lego set, which hit stores in October, is pretty cool. It even features mini-figures such as Han Solo (from both the old and new films), Leia, Chewbacca, and Rey (also from the new films). Plus, with 7,541 pieces, it is officially the largest Lego set ever sold, eclipsing the previous largest sets, which were Star Wars’ Death Star (poetic justice, right?), the Taj Mahal, and the Tower Bridge. Get your brick-building engineering skills ready (see video).