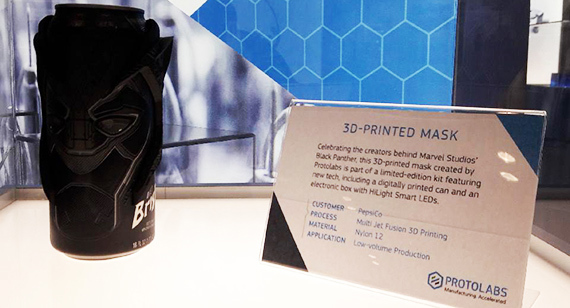 The Black Panther mask, built with Multi Jet Fusion, was designed by packaging engineers at PepsiCo. Plastics Today dubbed it one of the "coolest things" they saw at NPE.

PepsiCo recently looked to Protolabs to create a limited edition mask Pepsi can—only about 250 were manufactured—for the world premiere of “Black Panther.” The can was produced using Multi Jet Fusion 3D printing. The mask can was on display at Protolabs’ booth at the show, and drew plenty of interest. In fact, Plastics Today rated it as one of the “coolest things we saw” at the show.

The weeklong show, which continues through Friday in Orlando, is the world’s largest plastics trade show, and is convened every three years. A record-setting 65,000 engineers, product designers, scientists, senior executives, and others from more than 110 countries were expected to attend.

A striking array of topics was explored at the show, such as 3D printing’s role in the future of plastics manufacturing, emerging trends for plastics in healthcare, advances in plastics recycling efforts, and workforce development in the manufacturing industry.

Protolabs, which was one of more than 2,100 exhibiting companies at NPE, had a presence throughout the show. On Tuesday, Judy Carmein, a global product manager for Protolabs, was a panelist at the conference’s Women’s Connection Breakfast. Also on Tuesday, Thomas Davis, applications engineer for 3D printing, presented tips on designing for industrial 3D printing, which attracted attendees from a number of industries. On Thursday, Jeff Schipper, director of special operations, was scheduled to speak on 3D-printed molds vs. metal tooling. Additionally, throughout the week, various Protolabs experts were interviewed by several trade publications covering the event.