With so many offices recently closing their doors and employees shifting to remote work and home offices, many are finding themselves without the office accessories they are used to. From stand/sit desks and ergonomic chairs to portable keyboards and wireless speakers, we’ve compiled a list of some top products to make working from home a little easier. 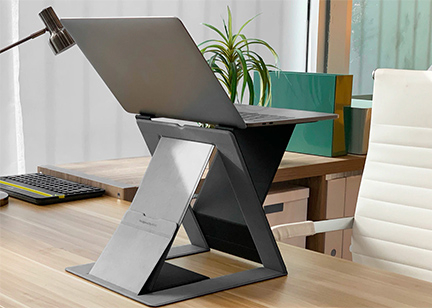 The two most basic pieces of a work station are a desk (or kitchen table, or coffee table—anyplace to put your computer really) and somewhere to sit. Standing desks provide many benefits including reducing back pain, improving mood and energy levels, and burning calories. And, there are now more affordable options than you might expect.

The MOFT Z is thin and small, but strong enough to sturdily hold a laptop up to 10 inches in the standing mode and at a 25, 45, or 60 degree angle in sitting more. Its lightweight and thin design makes it easily portable for those without a designated workspace throughout the day. All you need is a surface to set it on. For those looking for something a little bigger with space to hold more than just a laptop, the X-Elite Pro Height Adjustable Desk Converter has an almost 4 sq. ft. surface with enough space for a laptop or monitor, keyboard, mouse, and coffee cup. Its standing height can be set anywhere from 7 to 16 inches.

If sitting is more your style and you work mainly from a laptop, the LapGear Designer Lap Desk gives you the flexibility to work from just about anywhere. It includes a phone/pen holder and elastic for keeping stray papers or notepads together built in to its surface and is large enough to balance a laptop and mouse while you work.

Moving to seating, an ergonomic chair will help with comfort and productivity. The WORKPRO Mid-Back Mesh Task Chair’s breathable mesh and adjustable seat and armrests will keep you comfortable and supported through many hours of work. For an even more comfortable and customizable option, Offex Gaming’s latest high-back chair is contoured for comfort, with height- and tilt- adjustable seating, adjustable headres, and lumbar support. 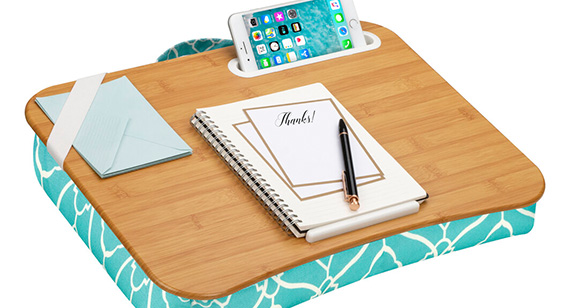 After getting your work space set up, it’s time to move to other office staples such as monitors and keyboards. Dell’s 24-inch Widescreen LED Backlit IPS Monitor provides plenty of screen space without taking up too much desk space, and its ultra sharp 1920 x 1200 resolution display uses in-plane switching technology to rotate between vertical and horizontal viewing angles. For an even larger viewing plane, LG’s 34-inch UltraWide monitor gives you the space and functionality of dual monitors, while also allowing you to extend one program across a single screen. The monitor is just shy of 5K resolution and was designed with video editors, photographers, and software and app developers in mind.

Apple’s sleek, portable Magic Keyboard features Bluetooth compatibility, a numeric keypad, document navigation controls, and full-size arrow keys for a more productive workflow. Its battery only needs to be charged about once a month, making it long-lasting throughout your working from home days. A less expensive alternative is the Azio MK MAC USB mechanical keyboard that includes backlighting, function keys for quick access to various Mac features, volume adjustment wheel, tactile feedback, and a snap-on palm rest. It is, however, designed exclusively for Macs. 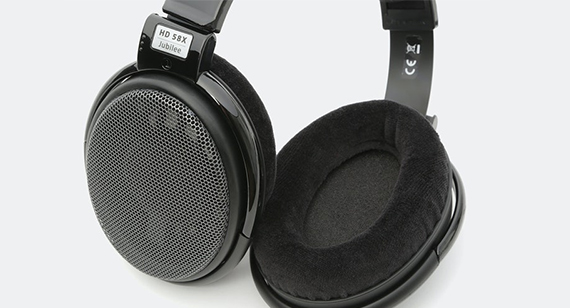 Beyond the basic office accessories, we rounded up a few products we think will make it easier to get through the work day. For music lovers, Onyx Studio’s powerful Bluetooth speaker will fill just about any sized room with music and travels wirelessly around the house with you. Its eight hours of playtime between charging is just enough to get you through the workday, and it even has a built-in microphone that can be synced for calls. If others working from home don’t share your taste in music, Sennheiser’s HD 58X Jubilee Headphones are the peak of the company’s headphones, designed with feedback from the audiophile community to provide clear, fast, dynamic, and lively sound.

On the phone all day? A good headset is a must. Plantronics' Voyager Legend Bluetooth headset provides seven hours of talk time with voice-control commands and a design that fits snugly on your ear and won’t slip off. And, to charge all your devices at the end of the day, the Air Omni versatile six-in-one charging station can charge your phone, tablet, smart watch, ear buds, and even your Mac all at once.