Like any other self-respecting engineer or product developer, you’ve probably seen Adam Savage’s latest show, "Savage Builds," where Adam collaborates with various experts, idols, and inventors to take on bigger and badder ideas that the self-proclaimed “maker of things” has always wanted to tackle.

Season one of "Savage Builds" was a must-watch here at Protolabs, so we’ve compiled our favorite moments from it. 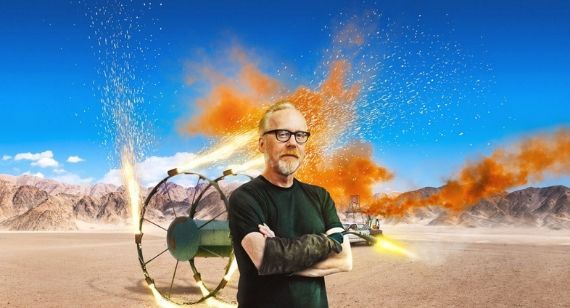 Adam Savage of "Savage Builds," which airs on Discovery Channel and the Science Channel.

As the old saying goes: “Do what you love and you’ll never work a day in your life,” and Adam is no stranger to this adage. An avid lover of cosplay and Marvel action movies, Adam does a great job of incorporating these personal interests into the challenging projects he builds.

For example, in episode one, “Building Iron Man,” Adam and his team decide to develop the first-ever real Iron Man suit. They work tirelessly to manufacture the 3D printed titanium parts, mold abs out of flexible urethane, and build shoes with powdered nylon. Ultimately, they were successful—the suit was able to withstand bullets, explosions, and even flight tests—all while having fun doing it (read: Adam took flying lessons from Gravity founder, Richard Browning!).

The wow factor didn’t stop there; episode three, “Mad Max Melee,” showed the team get involved with the post-apocalyptic scene to build three battle cars that eventually faced off in a Mad Max-inspired fight to the death. Adam and his two challengers each used building techniques, such as welding, carpentry, and electrical engineering, to construct their vehicles using only junkyard scavenged scraps. In the end, only one fighter reigned supreme, but everyone was inspired and felt that the fun project fostered creativity, resulting in high-quality work.

While the ultimate project goal is to succeed, failure is inevitable (and oftentimes necessary!) and "Savage Builds" is not afraid to show this.

Adam and NASA team up for episode two, “Wheel of Death,” to rebuild and perfect a rocket-propelled experimental super-weapon that could’ve changed the course of WWII by rolling over battlefield obstacles like barbed wire. From failing to completely sync the rocket propulsion to the meticulously molded flywheel-powered panjandrum not being able to travel more than a few feet, the project suffered multiple failures, with the team ultimately blowing up the super-weapon and chalking it up as a loss.

In episode five, “Nitro Explode-aganza,” Adam set out to discover if nitroglycerin is as volatile as legend says. The team aimed to recreate the 1866 Wells Fargo office nitroglycerin explosion using multiple methods, one failing after the other: dropping the chemical on the pavement, smashing the substance with metal plates and hitting the nitroglycerin with a sledgehammer. Finally, the team was able to produce the explosion using a sledgehammer at a specific angle, but they had to persevere in the face of numerous setbacks to reach a successful outcome.

Past, Present, and Future

Technological advances have played a vital role in nearly every industry including manufacturing, but the past can also offer valuable lessons. "Savage Builds" episodes often take a trip back in time to examine the historical methods for developing and building parts and weapons and combine them with today’s cutting-edge technology, furthering the team’s knowledge and skill set for present and future projects.

In episode four, “Forging Excalibur,” Adam discusses his fascination with swords and the King Arthur tale, inspiring him to forge a similar blade from an iron asteroidal meteorite he bought online. With the help of a master blacksmith, Adam crafts the sword by heating the iron at extremely high temperatures and pounding and then folding the metal to incorporate all materials before bending it into its final shape. The entire project is a huge growing experience for Adam where he learns the reasoning behind each process and gains skills that he can use in the future.

Adam also teams up with famed "Lord of the Rings" filmmaker, Peter Jackson, for episode seven, “Dogfight Derby,” where they highlight the craftsmanship seen in WWII era fighter planes and utilize modern technology to build a state-of-the-art fleet for a knock-down, drag-out fight right out of the 1940s. Adam equips his British R.E.8 with sensor-driven laser tag systems, simulated machine gun fire, smoke screens and special effects to take out his German Fokker contender but surmises the task would be far more difficult with someone actively shooting back at you as was seen in wartime battles.

The ways in which Adam Savage and his "Savage Builds" team use personal interests to spark inspiration, persevere in the face of failure and examine older ways of creating to inform current and future builds are relatable lessons for all audiences. Season one was exciting and, now that it’s wrapped, we’re looking forward to the projects to come next season; let us know what you hope to see!