Every year, cyclists converge in Battle Mountain, Nevada in pursuit of achieving speed records at the World Human Powered Speed Challenge (WHPSC). The competition is a mix of athletic performance, engineering and a seemingly endless number of variables. This past fall, Teagan Patterson, a Battle Mountain native and high-speed bicyclist, teamed up with Eric Ware and Mark Anderson to design a bicycle capable of capturing the world record—and her lifelong dream.

Mark and Eric are veterans of the WHPSC having raced in 2009 with their vehicle, the Wedge, and reaching speeds above 70 mph—good for the eighth fastest time in the world and third fastest in American cycling history.

Drawing from their previous success, they worked with Teagan in preparation for the 2015 WHPSC, where they would try for another record.

Eric Ware knew Protolabs from his day job as a mechanical engineer, so he decided to call us up for some machined parts for the bicycle design. In this Q&A, Ware gives a look behind-the-scenes at his team’s project. 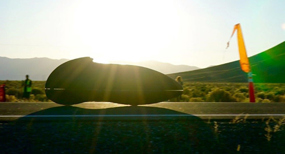 Seiran, the streamliner bicycle, was purpose-built for the WHPSC.

Can you give us a quick intro to the project and the race your team participated in?

Our project was to develop a fully enclosed speed racing bicycle, called a streamliner, in order to set speed records. Seiran, our streamliner bicycle, was purpose-built for the WHPSC. The bike is built for speed, it’s a fully recumbent bicycle that is enclosed in a streamlined carbon fiber outer shell to have the highest strength-to-weight ratio.

The race is designed for setting human-powered cycle speed records and our long term is goal is to set the women’s speed record. The course is 6 miles long, which includes a 5-mile run-up, a 200-meter speed trap (where the average speed is measured), and a 1-mile de-acceleration zone. 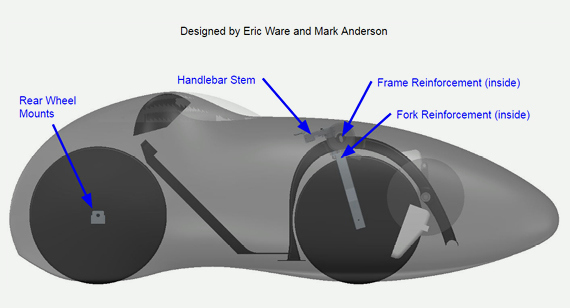 What were some of the challenges your team had to overcome as you prepared for the race?

Our primary challenge was the amount of time we had to design and build the bicycle. We had a delay in launching the project and had to self-fund the project as we searched for a sponsor.

Since we had this initial delay, we were behind schedule from the start. We were racing the clock during the entire 9 months of development and had no other option than to deliver an unfinished bike and finish assembly at the event.

To make matters worse, we had our trailer broken into and had a lot of our bike parts and tools stolen. We recovered some of the parts and tools, but many items were not recovered. But, with the help of numerous volunteers, we managed to complete the bike in time to get in several good speed runs during the second half of the event.

What parts of the bike did you send to Protolabs to manufacture and were they 3D-printed, machined or molded?

The parts that we had fabricated by Protolabs were machined from aluminum and included:

These parts were unique to the Seiran, but the concepts could be used on other streamliners (the design of the stem was similar to the one that we built for the Wedge streamliner.) We machined these parts with Protolabs because I had past experience from my day job and found it fast and very flexible. 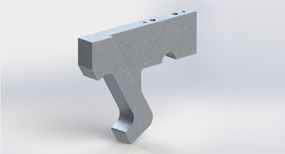 A CAD model of one of the prototype parts for CNC machining.

Which materials did you choose for the bicycle parts?

We used 6061-T6 for most of the parts, for a good balance between strength and weight at a reasonable price. However, for the frame reinforcement we chose 7075 for a bit higher strength and better fatigue resistance for only a slightly higher cost.

How did the race go for the team?

Despite some of the difficult circumstances completing the bicycle, we had a great week. We were still able to get the Seiran on the race course and Teagan had some great runs, achieving second place in the women’s field at the 2015 WHPSC event with a speed of 65.57 mph.

Many teams spend many times over what we had in our budget, but we got the Seiran built and on the road and achieved some really respectable results. Not too many years ago people thought that humans may never be able to bike over 65 mph…and we did that in our first season with the Seiran and Teagan.

Teagan Patterson is currently the third fastest American woman and sixth fastest woman in the world. Given that she is only 20 years old, she has time on her side and we expect great things from her and the Seiran streamliner in the future.

Q&A is a regular column featuring quick conversations with designers, engineers and other professionals developing products with rapid manufacturing.