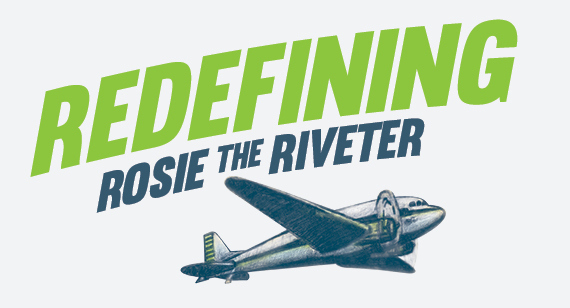 Manufacturing is a different industry than it was in the 1940s, advanced by technology that allows companies to produce things faster, better and more efficiently than ever before. A byproduct of that are new roles focused more on computing code than wrenches and rivets—roles that are being filled by women. But even though we live in a culturally evolved society, modern manufacturing still wrestles with misconceptions of masculinity at times. Where have we been, where are we now and what can we do in the future to ensure that women have an equitable stake in manufacturing?

On December 7, 1941, the United States Pacific Fleet stationed in Hawaii’s Pearl Harbor was attacked by Japanese forces, abruptly pushing the U.S. into World War II. Germany and the U.S. declared war upon each other four days later, and by the middle of 1942, the American military was actively involved in both the European and Pacific theaters of the Second World War.

Men and women were being shipped to serve overseas while factories were being transformed stateside to supply the U.S. with ammunition, weaponry, fortified vehicles, modified aircraft and other military equipment needed to fight in the largest human conflict in history. As factories across the country geared up for war, there were manufacturing jobs that needed to be filled—from the West Coast shipyards in California to Midwestern auto plants in Michigan to East Coast aeronautic manufacturers in Connecticut.

The increased demand for manufacturing workers along with the large percentage of enlisted male soldiers meant that women were being encouraged to join a traditionally male dominated industrial workforce. Women answered the call in emphatic fashion. During a six-year span from 1940 to 1945, female employment in the U.S. grew more than 6 points to 34 percent, according to the National Bureau of Economic Research, bolstered by dramatic increases within the aviation and munitions industries.

“Employment really accelerated and shifted to higher risk, higher skilled machinist labor during WWII, and that’s the general image of the woman worker during the 1940s—she’s welding, she’s riveting, she’s doing men’s work,” explains Brian Horrigan, exhibit curator at the Minnesota Historical Society. “However, it should also be remembered that women went into work doing conventional women’s work; there was an enormous demand for secretarial and clerical positions…it was just that women in manufacturing at the time was so unconventional, it gave people a sense of newness, of patriotism.”

That idea of industrial patriotism was personified through a fictional character dubbed Rosie the Riveter—first referenced in a 1942 song about a female assembly worker, then in J. Howard Miller’s “We Can Do It!” propaganda poster for the U.S. government and Norman Rockwell’s famous illustration on the cover of The Saturday Evening Post in 1943. There have been various claims of real-life factory workers who inspired Rosie, but she is most widely associated with Geraldine Hoff Doyle, a young machine operator in a 1940s Michigan metal factory.

The bandana-clad, muscle-flexing Rosie eventually grew into an American cultural icon symbolizing female empowerment in the 21st Century. But was it purely a sense of patriotic duty that compelled women to take factory jobs? Not exactly. Women wanted to and did directly contribute significantly to the war effort, but there were other benefits to manufacturing work. “They were young, they were free, they made their own spending money, and they had independence,” says Horrigan. “One of the things that women really remembered was the camaraderie. They remembered very fondly these groups of women who worked and bonded together. It was an emotionally important part of their lives.”

The war ended in Europe in May of 1945 with the surrender of German forces, followed by the defeat of Japan in the Pacific four months later. The U.S. was returning soldiers home having won the war, but at the cost of more than 400,000 service members. As soldiers arrived back on American shores and to their everyday jobs, some women remained in an industrial work setting, but many working in manufacturing left. Some women wanted to give up their positions to war-weary men who needed jobs, some wanted to leave to start families, while others simply lost their jobs, which justly caused a bit of resentment. By 1946, the baby boom was already underway while factories began reverting back to their original production states, which included the disproportionate male-to-female pre-war ratio.

In certain ways, the modern face of manufacturing looks much different now than it did 75 years ago. In other ways, it’s still a work in progress. Like many industries, manufacturing is being increasingly driven by technology. At Protolabs, an advanced network of computers translates 3D CAD models into instructions for injection-molding presses, CNC machines and additive equipment. In a matter of days, tools are milled and parts molded; prototypes are machined; concept models are built. Plastic, metal and rubber parts are regularly shipped to the same land (automotive), air (aviation) and sea (maritime) industries that were critical to the WWII manufacturing effort.

Technological progression has led to a completely new job set within manufacturing companies. Whereas women in wartime factories were characterized by a blue-collar, wrench-turning image, women today are design engineers, software developers and corporate leaders of multi-million dollar companies in addition to traditional machine and press operators. This diversification in roles shines through in national organizations like Ohio-based Women in Manufacturing (WiM).

"Technological progression has led to a completely new job set within manufacturing companies."

WiM—run by the Precision Metalforming Association—hosted its inaugural conference in Cleveland in 2011 to bring women together to network, educate and share best practices. “To our wonderful surprise, we had more than 130 women participate from all over the country in all different levels of manufacturing. Many were from the C-suite [executive level] and owners and presidents, but also many in middle management and production,” explains Allison Grealis, WiM Director. “What we found at that first conference was that there was definitely a huge need for this. Women weren’t necessarily receiving the support they needed along the way as they advanced and navigated their careers in manufacturing.”

Four years later, WiM has more than 400 members who have access to the organization’s directory, development programs, conferences, online communities and other resources to aid in the advancement of women in manufacturing. They also have collegiate outreach programs to help usher in the next generation of women interesting in manufacturing.

But the fact remains that even though women make up approximately half (49.4 percent, to be exact) of the total workforce in the United States, they only comprise 27.1 percent of the manufacturing industry, according to the U.S. Bureau of Labor Statistics’ April 2014 report on employment. How can we bring that number to a more balanced level? Changing manufacturing perceptions might hold the key.

“It’s our assessment, and it’s just one opinion, but we think that women don’t see themselves in manufacturing; they don’t see it as a women’s profession. Unfortunately, a lot of it is just a perception issue,” says Grealis. “There’s also a national discussion that too few women, and men alike, are getting involved in STEM (science, technology, engineering, mathematics)-related careers, and we now see nationally that it is of great importance.”

By educating women through an open dialog happening online and face-to-face, WiM hopes to shift the existing stereotype of what it means to work in modern manufacturing. “Our goal is to get to a more equitable representation of women and men in manufacturing. We hope to increase that number from a near 30 percent representation to 50 percent, and we want that representation at all levels,” says Grealis. In the words of Rosie, we give that a solid: “We Can Do It!”