Shop Talk: Catching up with our Longtime Customers

Simply put, without our customers, we wouldn’t be where we are today. Whether it’s a one-person startup or one of the world’s largest companies, our customers’ innovative ideas are what we run on, and what make Protolabs an exciting place to work every day. We couldn’t be more grateful.

It would be an understatement to say we’ve witnessed change over the past two decades. Since 1999, we’ve grown from a single garage with a molding press to several manufacturing facilities located around the world. In 2018, we served nearly 46,000 product developers through our digital manufacturing services, all while introducing sheet metal fabrication and moving into a new CNC machining facility. All of this growth would be impossible without you, our customer.

As we celebrate 20 years in the manufacturing industry this year, we contacted some of our customers who have been with us since the very beginning, the ones who knew us as a scrappy startup called Protomold, and have witnessed the evolution of digital manufacturing firsthand. We discussed everything from the first parts they manufactured with us to where they see the industry going in the future. 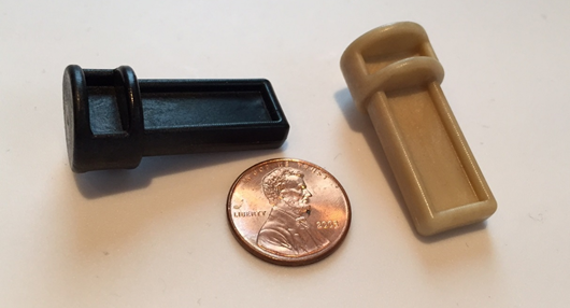 These are some of the first parts ever made at Protolabs. At the time, the company only offered injection molding services and you could count the number of molds produced on two hands.

How did you first hear about us? What was one of the earliest projects you manufactured at Protolabs?

David Franke: I’m guessing we saw an advertisement in a trade magazine. We were intrigued by the fast lead times, and decided to give Protomold a try. The first parts we created with Protomold was a family tool. It was a left- and right-side lockout device for the oil and gas industry.

I remember my first meeting with Protomold was at the original Maple Plain facility with Larry Lukis, Mark Kupicek, and Kevin Crystal in 2001.  We sat at a folding table on the production floor right next to three CNC mills and two molding machines and discussed the 2D drawings I brought to our meeting.  It’s been amazing to watch Protolabs grow from our first meeting to the company it is today!

Mark DiMatteo: It was an internet search way back in 1999! I had two parts made to house a patient care assistant (PCA) and a battery for a prototype in 2001. I made hundreds of these and they worked very well.

Ben Lane: Our early engagements with Protolabs were focused on your CNC machining offerings.

Marv Ruffin: I saw a print ad in a magazine called New Products. I think that was the magazine—it has been awhile. Our first part was a fairly complex mold, it was a clear acrylic total internal reflection (TIR) lens. These lenses are notoriously difficult to mold because of their non-uniform thickness and the need for optical clarity.

Dan Amonett: I believe it was Google search many years ago. Our first part with Protolabs was for the development of a new appliance timer.

What’s the most notable development challenge that we’ve helped you overcome?

David Franke: In 2001, Turck was a much smaller company than it is today.  We had a lot of opportunities for low-volume, molded parts.  We could not justify the high-tooling investments to mold 2,000-5,000 parts per year. Protolabs (Protomold at the time) opened the doors for many opportunities for Turck. In the first two years, we created 14 molded parts with Protomold!

Ben Lane: Protolabs has enabled us to fabricate parts and build complex instruments on an extraordinarily accelerated schedule, allowing for multiple design iterations in the time originally allotted for a single design cycle.

Dan Amonett: In general, the quick-turn nature of Protolabs’ services helps us make sure parts function as intended.

Mark DiMatteo: Nothing specific, but using actual molded parts for early testing definitely helps us mitigate risk during product development and allows us to get to market quicker.

Marv Ruffin: The biggest challenges have been related to molding the various TIR lenses we have made over the years. The different shapes have required special attention and we have been happy with the support.

Over the years, have you mostly worked on prototypes with us? Have there been any production projects that you’ve used us for?

Marv Ruffin: The most successful product that has gone into production with your parts is a navigation aid. In short, it’s a light that sits atop of buoys and windmills. More specifically, this light sits atop windmills in Europe and the North Sea. We ultimately moved production to another vendor, however the first several years used Protomold parts.

Ben Lane: We primarily use Protolabs for prototypes and low-volume “field trial” builds. We have, on occasion, used Protomold for quick turn, “bridge” tooling to enable our clients to launch a product while the production tooling is in process.

Dan Amonett: Most have been for prototype or pilot runs, we have used Protolabs for some short bridge production to get started. 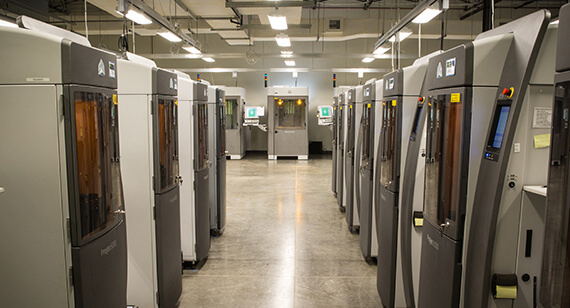 3D printing was added to our suite of services in 2014 with the acquisition of North Carolina-based FineLine Prototyping.

What services do you tend to use most frequently? Has it changed as we’ve added machining, 3D printing, and sheet metal fabrication?

Marv Ruffin: Quick-turn injection molding has been and will continue to be the main service we use. Nevertheless, we’ve used the machining and 3D printing services as well. We use these services if our internal capability is at capacity, or we need it faster than what we could do.

Ben Lane: We’ve used FirstCut, FineLine, and Rapid’s sheet metal fabrication service for years, and continued with all three offerings as they were absorbed under the Protolabs umbrella. As noted earlier, we use Protomold periodically for quick-turn molded parts.

Mark DiMatteo: Still use injection molding the most but I have been using your machining services quite a bit lately especially for one-off parts that need to be tested rigorously when I cannot use 3D printing.

David Franke: The machining business has opened many opportunities for us over the last few years.  We continue to use Protolabs to supply low-volume, molded parts as well.

As manufacturing becomes increasingly digitized and automated, how has your job changed? How have we helped you navigate the industry’s evolution?

Dan Amonett: All design work is now done with solid modelling and you have helped by expanding your services from strictly tooled parts to include machined and additive manufactured parts.

Ben Lane: Evolution in the manufacturing industry has revolutionized our ability to design and build high-quality, electro-mechanical systems on a very short timeline. The ability to quickly and accurately prototype complex mechanical systems has enabled us to evaluate design performance using physical prototypes manufactured with production materials. This reduces the need for time-consuming finite element analysis (FEA) and computational fluid dynamics (CFD) simulation that used to be necessary prior to investing in prototype fabrication. This shift in workflow at Key Tech enables us to quickly iterate during the design phase and confidently deliver mature prototype instruments that transfer efficiently to production.

Marv Ruffin: The biggest change since we started working together has been 3D printing. It has allowed us to become even more flexible with our design exploration process. We can print various designs and test the form, fit, and aesthetics in hours, versus weeks.

David Franke: The biggest change for Turck has been the increased speed of development. Protolabs has helped us get products to market faster and provide solutions to our customers.

What’s next for you, your company, or your industry?

David Franke: At Turck, we strive to provide custom solutions that meet our customers’ needs in a timely manner. We are continually expanding our knowledge and improving our processes to meet our customers’ increasing demands.  The services offered by Protolabs helps Turck rapidly develop products and has helped Turck become the industry leader it is today.

Ben Lane: Key Tech is growing and will continue to offer our customers creative, intelligent solutions to some of the industry’s most challenging development projects.

Mark DiMatteo: As always, speed to market is important. We will definitely be using more rapid prototyping services in the future to achieve this.