Smartphone Manufacturers Push the Boundary in Design and Functionality 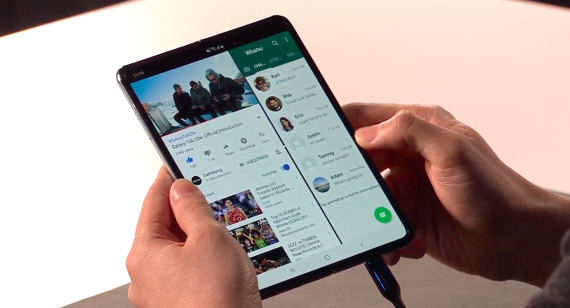 When unfolded, the Samsung fold can display up to three apps at once, the first for any smartphone. This Samsung demo shows two apps running simultaneously, with a third sliding over with a swipe of the finger. Photo Courtesy: Samsung

In the ever advancing world of smartphones, the foldable phone seems to be the latest innovation. But, while developers are still working to perfect that, new technologies continue to emerge that test the limits of the phone’s capabilities. In this month’s eye on innovation, we explore four recent smartphone trends.

The first to the foldable game, Samsung debuted its Galaxy Fold earlier this year, touting a 7.3 in. HD screen that folds vertically down the center, transitioning from tablet to phone size. At almost $2,000, customers get 512GB of storage, front and rear facing cameras, and the first phone to simultaneously display three apps at once. The release, originally planned for April, was delayed until “at least next month,” due to design flaws during a test launch including display glitches, breaking screens, and a confusing protective layer that some users peeled off.

Tackling the foldable phone from a different angle (literally), designs for a vertically folding Motorola Razr revival were leaked earlier this week. While we can’t say for sure if/when this phone will hit the market, the leaked design shows a screen with a vertical fold similar to the original Razr, differentiating itself from the horizontally folding phones being developed by Samsung and others. The result would be a smaller device that folds open to a regular-sized phone. 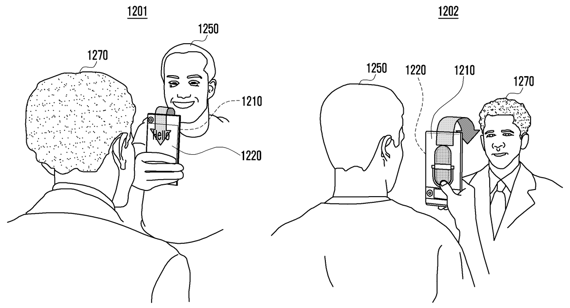 A patent illustration shows how the phone could break down a language barrier by listening to both sides of a conversation and display the translated text on each side of the screen. Photo Courtesy: WIPO

In case it’s not able to perfect the foldable phone, Samsung has another idea to maximize screen real estate. The tech giant was recently awarded a patent for a screen that wraps around the entire device, front to back. The patent shows how the display could be used for translation, with two people having a face-to-face conversation and the phone displaying a translation of what is being said on both sides of the screen. Developers could also use the edge at the top of the phone where the screen wraps from front to back as a space to display notifications and alerts.

The Rise of Chinese Smartphone Makers

Surpassing Apple to become the world’s second-largest smartphone manufacturer, Huawei was the only top-of-the-market smartphone company to see shipments grow in the first quarter of 2019. Fellow Chinese smartphone makers Xiaomi and OnePlus are also creeping up on Apple and Samsung, proving that they could be a real threat soon. The manufacturers can credit their explosive growth to customers turning away from companies like Sony, HTC, and LG, looking for higher value and more cutting edge features. While Samsung and Apple still hold a loyal customer base in the U.S., their grip on the market is loosening as Chinese smartphone makers compete on design, as well as flashy new innovations.