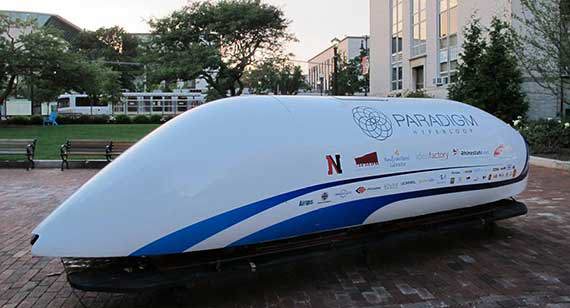 Protolabs supplied the Paradigm team with CNC machined parts that make up the pod's wheel assembly.

Hyperloop is a concept developed by a team of engineers from Tesla and SpaceX. Outlined by Elon Musk in the Hyperloop Alpha paper, this new form of transportation is intended to serve as high-speed, economical mode of travel for people as well as cargo.

The Hyperloop design consists of a large underground tube that houses a low-pressure environment. The vehicles operating within the tube, referred to as pods, use magnetic levitation to lift off the ground and travel at long distances. Due to ultra-low aerodynamic drag created by low-pressure environment, the pods will be able to reach speeds of roughly 750 mph.

Musk and SpaceX open sourced the Hyperloop concept with the intention to improve upon its initial design and accelerate the system’s implementation.

The technology might sound similar to high-speed rail but there are differences that make it an optimal transportation solution in certain situations. For one, it’s faster. Hyperloop will reportedly travel two to three times faster than the fastest high-speed rail in operation today. And, perhaps most importantly, it will be an on-demand service and bring passengers directly to their destination.

Other benefits of Hyperloop include:

SpaceX is helping promote Hyperloop technology and advance terrestrial transportation through its Hyperloop competition. The goal is to accelerate the development of functional prototypes and new technologies by challenging teams to build a high-speed pod. Teams are comprised of engineering students from around the world.

The first competition took place earlier this year, which resulted in three teams testing their pod on the Hyperloop track. The success of the first competition led SpaceX to host a second competition. The field will feature past participants and new teams and will solely focus on achieving maximum speed.

Protolabs is supplying the Paradigm team with several machined parts for their design. After running into a problem with another vendor, the team reached out to Protolabs for parts that will enable them to join their custom designed wheels to the air bearing.

The Paradigm team is made up of students from Northeastern University, Memorial University of Newfoundland, and University of the North Atlantic. You can keep track of the team’s progress by following them on Twitter.

Protolabs also supported Badgerloop, a team comprising of 50 students from the University of Wisconsin-Madison, with machined parts. The team's greatest challenge was limited development time, so they turned to Protolabs' automated quoting and analysis and quick-turn machining capabilities.

The machined parts were converging-diverging nozzles, key components within the pod's propulsion system. The nozzle accelerates gas as it flows through the system, which provides thrust to the pod. Badgerloop worked through one iteration before finalizing design, since some exterior modifications needed to be made to properly integrate the nozzle with the rest of the propulsion system.