How Additive and Subtractive Manufacturing Combine to Accelerate Aerospace Development

The world of manufacturing took a dramatic turn several years ago when a fuel nozzle was manufactured for GE’s Leading Edge Aviation Propulsion (LEAP) jet engine. An assembly that used to be built from 20 components was produced using additive manufacturing (industrial-grade 3D printing) in one single unit that reduced the nozzle’s weight by around 25 percent. This was a massive breakthrough in an industry where weight is extremely important. From that day, there has been a constant conversation or buzz around additive manufacturing. While it is key for companies to leverage new technologies and methods of manufacturing, it is just as important for companies to understand that they should also still consider using traditional methods of manufacturing, processes that are also being modified and advanced to survive in the rise of Industry 4.0.

This digital sea change has breathed new life into conventional methods of manufacturing. As a result, a company’s purchasing team can now harness the power of Industry 4.0 by using new technologies like additive manufacturing together with software-driven, automated “traditional” methods like CNC machining. This combination can help shorten development time and deliver assemblies at unprecedented speeds. 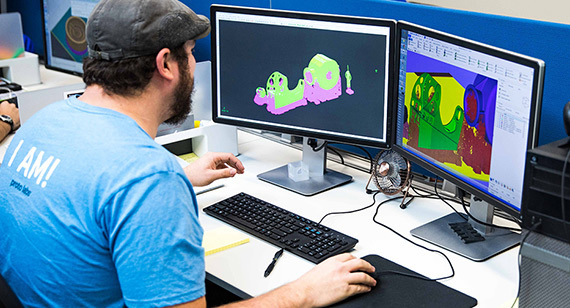 More than a third of manufacturers expect Industry 4.0 to drive 20 percent or more revenue growth over the next five years.

This is no longer just a buzz phrase. Industry 4.0—the name given to the automation and data exchange in manufacturing technologies—is a reality. Historically, industry developed over time from water and steam power, through production and assembly lines, on toward digitalization and robotics and to our current era of data and connectivity. Research has shown that more than a third of manufacturers expect Industry 4.0 to drive 20 percent or more revenue growth over the next five years. It is also expected that half of these manufacturers expect to reduce cost and increase efficiency by 20 percent through the automation methods that characterize Industry 4.0.

The automation and connectivity of Industry 4.0 is powerful and it will help drive traditional manufacturing methods, such as CNC machining, to be more economical in production. Accordingly, in our new connected world, leveraging both traditional methods and new manufacturing technologies can now help shorten development times.

While there are many different types of CNC machines—which cut parts in a subtractive process from metal and plastic material stock—the majority of the marketplace is dominated by vertical milling and lathes. Parts with complex geometries can be manufactured using both 3- and 5-axis machines as well as turned on a high-speed lathe. The aerospace industry makes heavy use of machining with many parts manufactured in specialty metals as well as standard aluminum, steel, and titanium. With an increasing demand these days on the aerospace and defense industry, there is equal demand for manufacturing partners to support large original equipment manufacturers (OEMs) in both quality and on-time delivery.

While CNC machining would be classified as a traditional manufacturing method, at Protolabs it has been automated (read: reinvented) with massive capacity and highly complex software that communicates directly with a network of mills. These mills are fueled by more than 30 stocked engineering-grade plastic and metal materials that are suitable for the aerospace industry. 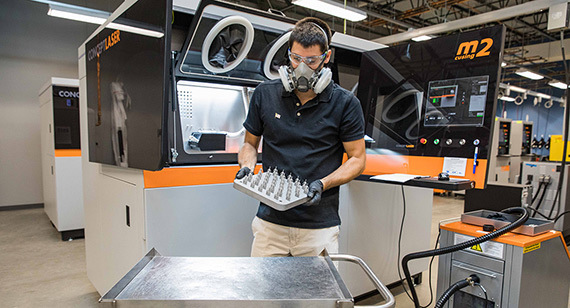 Where Does Additive Manufacturing Fit In?

Numerous additive manufacturing methods are available that can be leveraged in development for aerospace applications but none deliver as much of a punch as metal 3D printing aka direct metal laser sintering (DMLS). This process is an industrial 3D printing method that builds fully functional metal components at speeds much faster than traditional methods, such as die-casting. In the end, a range of metal materials can produce final parts that function well for end-use applications.

The DMLS machine sinters layer by layer. The support structures are sintered to the build plate, then the part itself is drawn onto a bed of metallic powder. Each layer of powder is micro-welded and the build platform shifts downward allowing a recoater blade to deposit the next layer of powder into an inert build chamber. This process will repeat, sometimes thousands of times, until the build is complete.

A significant amount of work goes into post processing DMLS parts as they come out of the build process. The parts will be heat treated, removed from the build platform, have support structures removed, then finished per customer requirements. The final part will be delivered near 100 percent dense.

DMLS is a game changer for prototyping in production-grade materials, for developing complex end-use parts, and for reducing the number of components in aerospace assemblies.

It can be beneficial to any company to implement both additive manufacturing and CNC machining, sometimes in conjunction with each other for projects they are working on.

For example, in some cases it might make sense to consider a manufacturing method from the standpoint of material left behind. If you have a component in your assembly that is notorious for being difficult to machine, and requires a large block of material, it could be considered for additive manufacturing. In other words, think of it as a case of  “chips on the floor.” Anytime you are leaving massive amounts of expensive material on the floor after machining a part from a solid block, you are increasing the fixed costs associated with the development of that part and the assembly that it is in. Additive also comes into play for more complex parts.

The inverse of this situation is also true. Simple, easily machined parts will likely cost more to 3D print so they should continue to be machined. But considering the two technologies together can lead to a reduction in costs associated and a decreased amount of time spent in development waiting for a part to be cast or traditionally machined.

Ultimately, for aerospace, automation and the use of data are changing the way we look at traditional manufacturing methods. These advancements in “traditional” methods, coupled with the adoption of new technologies such as additive manufacturing, are allowing aerospace and other industries to move at unprecedented speeds.