The Dawn of Digital Manufacturing 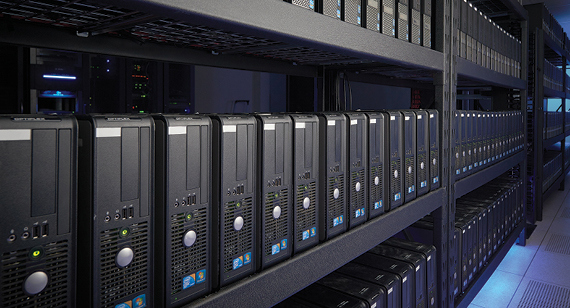 The digital age of manufacturing is here and it’s being powered by intelligent factories playing host to a perpetual dialog between software and hardware. To understand how the industry got to this point, let’s take a brief trip through history.

At the arrival of 21st century, Protolabs was a budding manufacturing company founded by a self-proclaimed “computer nerd” named Larry Lukis who wrote a million lines of code to automate the process of making injection molding tooling. He laid the technological groundwork for what became a complex system of proprietary software with the ability to communicate to a network of advanced manufacturing machines.

The way in which we manufacture things is changing again. We’re three industrial revolutions deep and on the brink of a fourth, buoyed by a concept called digital manufacturing.

An Introduction to the Digital Thread

In custom prototyping and low-volume part production, 3D CAD models not only start the conversation, but are the focal point throughout the digital thread. Protolabs accepts multiple CAD files formats that can be uploaded online at any time, and once a CAD model is submitted, automation software takes over.

The quoting software contains design and manufacturing rules that were extracted from human experts and then embodied in the code used to analyze the geometry of parts that will eventually be additively manufactured (3D printed), CNC machined, or injection molded.

With injection molding, for example, the software determines optimal part orientation in the mold and placement of the parting line, so the A and B sides of the mold can be established. From there, potential issues—like thick sections or absence of draft—are identified, and the part can even be digitally tested against a virtual representation of the model to predict material flow in the mold.

While molding considerations like parting lines and draft are of limited concern in additive manufacturing, the orientation of a 3D-printed part during the build, and its relationship to other parts on the build platform, do need to be established. All four additive manufacturing processes at Protolabs—stereolithography (SL), selective laser sintering (SLS), PolyJet, and direct metal laser sintering (DMLS)—undergo this level of preparation to create an optimal build.

In traditional manufacturing, an experienced molder or machinist may be able to substitute experience for analysis by simply looking at a part, but that’s certainly not scalable, timely nor repeatable when immediate feedback on a design is needed.

With digital manufacturing, all of the analysis and preparation is automated, meaning an interactive quote with design for manufacturability (DFM) analysis and pricing feedback can be returned to the product designer or engineer inside 24 hours. If a design has potential manufacturability issues, recommended and/or required changes are highlighted directly within the quote so design iterations can be made before production begins.

On injection-molded parts with minor changes, Protolabs sometimes provides a second CAD model—called a Protolabs Proposed Revision (PPR)—with changes already made. The revised model can be used immediately or the designer can transfer the modifications the original model, maintaining the design history in the designer’s product life cycle management system. When a CAD model is ready, a mold designer initiates another Protolabs proprietary application to design a mold system around the part, and add necessary features such as gates and runners, side-actions, perhaps pickouts, and an ejection system.

Again, pre-production prep on additive parts differs from CNC machining and injection molding. On parts built with SL and DMLS processes, for example, support structures are designed into the CAD models. These supports help prevent the parts from curling or sagging during the build process, and are later removed during post-process finishing. Additive models are also digitally deconstruction, or sliced, into thousands of file layers and then reassembled into a production-ready build file by yet another proprietary computer application.

When a CAD model is ready to be 3D printed, machined or molded, the digital thread continues towards the factory floor.

The Convergence of Software and Hardware

We’ve reached a point in the conversation where the mold or part design needs to be translated into a language (called G-code at Protolabs) understood by a network of manufacturing machines. This translation process is called toolpathing. Now bear with us as we throw a few acronyms your way. Automated toolpathing starts when non-uniform rational basis spline (NURBS) information and boundary representations (BREPS) on the CAD model and the injection mold are tessellated into a comprehensive geometric model in the software.

All that needs to be done next is a bit of geometric reasoning to decide which machining strategies will work best with various areas of the mold or part, then some reach analysis and collision detection are added to decide which end mills can cut which areas, and an automated fixture generation algorithm or two are tossed in.

From there, it’s a matter handing the design over to a digital toolpath generator, which decides where and how fast to steer the machine tools, in the process creating a program in the G-code language that Protolabs’ automated machines understand. A block of material and a G-code program are loaded into a selected machine and the machine takes it from there, based on the G-code instructions. The end result is a final machined part or a set of mold halves that are polished and sent to a press to begin part production.

Limited toolpathing is needed in additive manufacturing to begin a build, but rather the production-ready file (or file packet) we spoke of earlier is sent directly to computer-equipped SL, SLS and DMLS machines. Material is then loaded into the machine, and parts are only a few clicks away from the start of production.

Why Digital Manufacturing is Important

The beauty of digital manufacturing is that this entire thread—from CAD model to final part—is finished in less than two weeks, sometimes within a day or two. Multiple design iterations can be made. Development is accelerated. Products are launched to market fast. And supply chains are better maintained throughout a product’s entire life cycle.

As the flicker of a fourth industrial revolution begins, manufacturing is poised to fully embrace the digital age for decades to follow.