The Digital Transformation of Injection Molding

Protolabs is reinventing injection molding. How? By automating the front-end of the manufacturing process. Think about it as two halves: the half before and the half after the mold is made. The front half contains your idea, your design, your CAD model. The back half is after the mold is made, when your parts go into production.

For more than 50 years, the manufacturing industry has primarily focused on that back half, the production side—intent on improving the back-end of manufacturing by creating faster cycle times, reducing waste, cutting  labor costs (using robots, for instance), using trimming fixtures, and on and on. The whole focus has been on—once the mold reaches the press—shooting out those parts as quickly and cheaply as possible.

What was ignored? That front end: what it takes to get to the mold, the path from idea to part design to CAD model and, ultimately, to CAM software.

Breaking with convention in the molding process, Protolabs, when it was established 17 years ago, chose to focus primarily on this front end, zeroing in on the time and effort necessary to get to the “first part.” This focus is a key difference in the industry.

Protolabs embraced this digital manufacturing technology, creating its own complex system of proprietary software, and applied it to all of its manufacturing processes. But, unlike others in the industry, the company placed a notably strong focus on the frontend development cycle—the iterative prototyping phases before a product is launched. 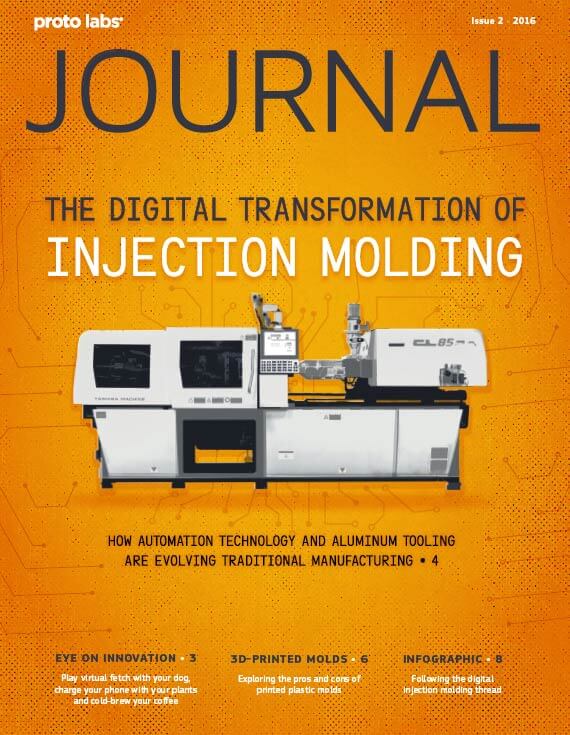 Protolabs automated its quoting system, and included design for manufacturability (DFM) analysis in this system, creating a process that gives product designers almost immediate design feedback and costing analysis, enabling rapid design iteration and a quicker development cycle. Designers submit 3D CAD models of their proposed part or parts, which, by the way, can be uploaded online at any time, and then the quoting system’s automated software takes over.

As Don Krantz, Protolabs’ recently retired executive vice president and chief technology officer, explains the DFM analysis, “It’s all about quickly getting that prototype part into the hands of the designer to find out, ‘is this right, is this wrong, can I get to the market before anybody else does, or do I need to make changes so that it all fits together.’”

Indeed, the DFM analysis and pricing feedback can be provided in as fast as a few hours. Product designers from several industries who have used Protolabs say that this automated DFM analysis allows them to test multiple designs simultaneously, thereby arriving to design validation sooner, which saves time in the development cycle. And reduced development cycles mean a quicker path to market and ultimately revenue.

Miguel Perez, an engineer for Lockheed Martin, found Protolabs’ DFM analysis to be a valuable tutor when he was working on a prototype for a new quadcopter drone. The DFM analysis guided him through various part iterations, and eventually led him to shift from what was originally a 3D printing project to prototyping with injection molding.

In some cases, prototyping using an industrial 3D printing process is certainly a viable and affordable approach, but it’s important to note that prototyping using injection molding is just as fast and economically sound as 3D printing. Plus, injection molding produces engineering-grade plastic parts. But what about printed molds? Most industry sources also say that, for now, it’s probably better using 3D printing technologies for building parts, not tooling.

“The quoting system was awesome. It immediately told me if something was at all moldable in the first place, plus it gave me a rough idea on mold cost and part cost, and every time within a day…It basically taught me how to design injection-molded parts. I was not that familiar with injection-molded parts before that.”

With injection-molded parts that require minor changes, Protolabs can sometimes provide a second CAD model for the product designer—called a Protolabs Proposed Revision (PPR)—with changes already made. The revised model can be used immediately or the product designer can transfer the modifications to the original model, maintaining the design history in the designer’s product life cycle management system.

Following the DFM analysis, and, in some cases, the PPR, once the part has been approved, Protolabs moves into the final step before actual production—the digital preparation. This can include part orientation, gate and ejector system design, mold design and tool path programming. This prep leads to the eventual digital instructions that are sent to the machines for manufacturing—the software telling the hardware what to do.

Protolabs’ front-end focus delivers rapid quotes, iterations, prototypes and parts. For example, 25 to 10,000-plus parts can be produced in one to 15 days, as opposed to other sources that take four weeks and beyond. But innovation can be found throughout the company’s rapid injection molding process, not just on the front end.

For instance, aluminum tooling for molds is used, as opposed to traditional steel molds. Why? There are benefits: Using aluminum tooling is significantly cheaper, it reduces the time for manufacturing molds, and, in most cases, especially for small volumes of parts, is just as effective and equal in quality.

Dow Corning published a white paper on the successful use of Protolabs’ aluminum tooling for its moldable optical silicone materials, producing parts comparable in quality and optical clarity to those molded using a steel tool.

TRW Automotive, a Michigan-based global company focused on active and passive safety systems for carmakers, did its prototyping with injection molding at Protolabs for the components for a clock spring. TRW found injection molding for prototyping to be cost-effective and worked well for testing, evaluating and validating a part design before moving to large-scale steel tooling.

Beyond the front-end innovation, and the aluminum tooling piece, Protolabs’ massive manufacturing capacity, consisting of hundreds of mills and presses provides product developers with a reliable source for rapid injection molded parts each and every time.

Finally, a key point in all of this to keep in mind: While considering all that sets Protolabs apart, the company’s customers still receive same or better quality parts—using Protolabs’ rapid injection molding—than they would using traditional molding processes. Customers still get:

Ultimately, though Protolabs is not geared for high-volume jobs, the company’s injection molding service can help you eventually get to that high-volume production with bridge tooling. That is, Protolabs can help minimize the “cost of waiting” for your steel tool and get you to market quicker by having an aluminum tool made in a matter of days.