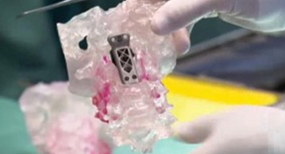 The 3D-printed part that would replace the patient’s cancer-ridden vertebrae. Photo: Dailymail.co.uk and ABC News.

3D printing and other rapid manufacturing methods continue to transform the med tech industry, as illustrated recently by an Australian neurosurgeon who, in late 2015, removed cancerous vertebrae in a patient and implanted, in their place, printed vertebrae.

Dr. Ralph Mobbs, a neurosurgeon at the Prince of Wales Hospital in Sydney, called the procedure a “world first.” The surgery was performed on a patient with chordoma, a rare form of cancer that occurs in the bone of the skull and spine. As Wired UK reports, the 60-year-old patient was affected in the two vertebrae responsible for turning the head — meaning that, if the 15-hour surgery had failed, he would have been left paralyzed.

Because of the position and function of these vertebrae, however, they’re extremely hard to replace — they must be an exact fit. Mobbs decided to 3D print the replacements instead, and worked with Anatomics, an Australian medical device manufacturer, to design and build the implants, which were made from titanium. The company also printed exact anatomical models of the patient’s head for Mobbs to practice on before the surgery. 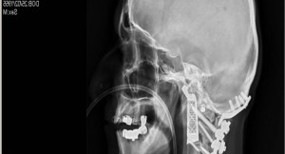 Implants are a specialty for Melbourne-based Anatomics, which manufactures patient-specific cranial, facial, chest wall and other skeletal and soft tissue implants for surgeons in Australia and around the world.

The company is a prime example of how tech-driven rapid manufacturers globally are providing innovative solutions — inside and outside the body — for physicians and surgeons.

Beyond implants, manufacturers are also creating, with a range of production methods, a stunning variety of bio-med products and surgical tools for the medical industry. Case in point: Protolabs recently injection molded the entire plastic assembly for a hand-held medical stapler. Designed for minimally invasive surgery, the stapler, the SubQ It!, dispenses bio-absorbable fasteners beneath a patient’s skin. The fasteners hold the tissue during healing and then are absorbed by the body.

Eye on Innovation is a monthly look at new technology, products and scientific advancements that we’ve mined from crowdsourcing sites and other corners of the Internet.