Look for lots of high-tech touches at this Sunday’s Super Bowl, organizers have promised. More than 72,000 fans are expected to attend the game at Levi’s Stadium in Santa Clara, California near San Francisco, which is home to the NFL’s 49ers.

As CNET reports, most of those in attendance will likely be using some sort of mobile device as they look at game statistics and share photos and other content on social media. To handle all of that data, the stadium, which opened in 2014, has 400 miles of fiber and copper cable and 1,200 Wi-Fi access points. The venue has 10 times more bandwidth than the NFL mandates at other stadiums. 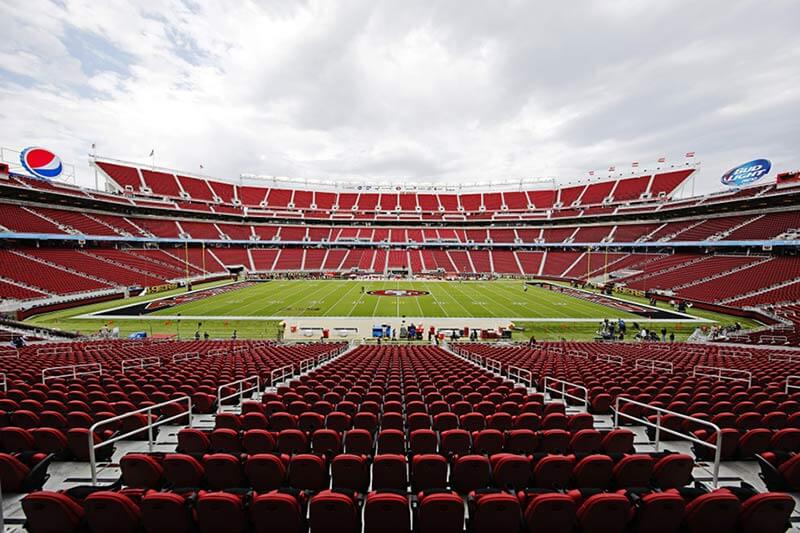 On the app side, those at the game can also use NFL Fan Mobile Pass and the Road to 50 apps to help them get around outside and inside the stadium.

Video is also central to the stadium’s technology infrastructure, says the San Francisco Chronicle. A video master control room runs everything that fans see on two giant scoreboards, a video ribbon board along the second deck and 2,400 TV monitors throughout the stadium. The room is filled with about $6 million worth of video equipment, including 4K-resolution ultra-HD cameras, instant replay machines and digital video monitors.

The stadium also includes 600 security cameras. Indeed, security efforts are in the starting lineup for Super Bowl 50. Wired Magazine recently reported that 60 federal, state and local agencies are working together to coordinate surveillance and security “at what is the biggest national security event of the year … All of which means that if you’re attending the game, or just happen to be in the general vicinity of the myriad events leading up to the Super Bowl, you will be watched. Closely.” Though officials would not disclose to Wired exactly how they plan to keep tabs on Super Bowl 50, privacy experts agree that given that this is an all-hands-on-deck effort, law enforcement almost certainly is using all available technology to ensure everything goes as planned. So, think video cameras, cell phone surveillance devices, automated license plate readers, social media monitoring software and more.

The game is expected to draw 110 million TV viewers. CBS Sports is debuting new technology in its suite of 70 cameras being used for the game, Wired reports. Last year, 40 cameras were used.

Eye Vision 360, a new replay camera, can freeze on any moment and revolve around the play to provide a first-person point of view of any player on the field. Eye Vision 360 works with 36 cameras strung together along the top deck of Levi’s Stadium.

Another new camera this year is the pylon camera. Eight custom-molded, endzone marker, orange pylons will be stuffed with two high-resolution cameras each, giving fans a field-level view of the game in 2K resolution. These cameras are also tricked out with microphones to help capture the sound of the field.

Finally, the SkyCam, a fan favorite, will get a serious update with a new version of the flying camera system called the Wildcat, which can travel at speeds nearly twice as fast as the previous version. The Wildcat can soar through the air at speeds surpassing 25 mph, which means the camera can outrun the players.

Eye on Innovation is a monthly look at new technology, products and scientific advancements that we’ve mined from crowdsourcing sites and other corners of the Internet.