Watch the Final Four in VR? A Slam Dunk, Almost.

So your office pool NCAA tournament bracket has long been busted. And March Madness has just made you Mad in March. At this point, you may not even care who wins this weekend. 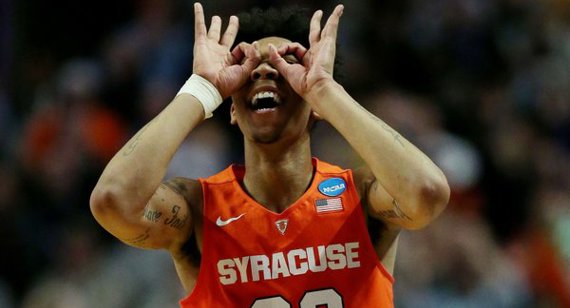 Well, here’s a cool way to break out of your funk: Watch the Final Four in virtual reality. The NCAA announced earlier this week that this weekend’s Final Four and National Championship games will be, for the first time ever, live-streamed in virtual reality, including a virtual scoreboard with live stats, game commentary and arena sounds.

Sweet, right? Well, mostly sweet. As TheVerge.com notes, the NCAA is using the term “virtual reality” a bit liberally. First, basketball fans will need to get hold of a Samsung Gear VR to download the NCAA March Madness Live app in the Oculus Store. Second, the streamed video will only occupy 180 degrees — not the full 360-degree sphere. Finally, if you don’t have a Gear VR, the NCAA is making a 2D version of the 180-degree stream available on the web, and 360-degree highlight footage will be posted to the NCAA March Madness page on Facebook.

On the tech side of things, Turner Sports and CBS Sports, official broadcasters of the tournament, are working with VOKE, a VR production firm, for the live VR stream, Sportsvideo.org reports. VOKE uses a non-fish-eye, true stereoscopic platform that streams both a live 180-to 360-degree 2D immersive feed for mobile, tablets and broadcast, and a live VR stream consumable on every VR platform.

The Final Four announcement stands as a prime example of the surging virtual reality industry. As The Motley Fool reports, the virtual reality market is estimated to grow from practically nothing today to $30 billion by 2020. Further, total sales of virtual and augmented reality devices will soar from 2.5 million in 2015 to 24 million by 2018.

Eye on Innovation is a monthly look at new technology, products and scientific advancements that we’ve mined from various corners of the Internet.