Welcome to the Machine Shop 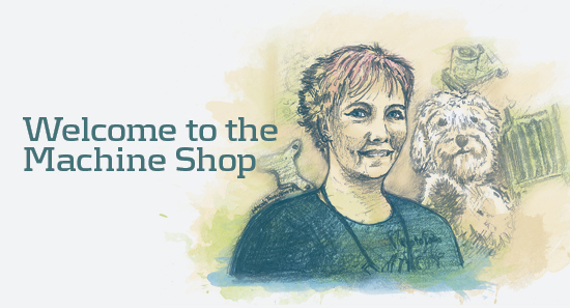 Rocking a faint purple streak through her hair and piercing eyes, Lisa Benson’s colorfully charismatic presence is immediate. A new addition to Protolabs’ team of applications engineers, Lisa spent her previous 20+ years disproving stereotypes as a female machine shop owner unafraid to show people that girls can play in the manufacturing sandbox just as well as the boys.

Her career as a machinist began in 1991 when she left her job as a mortgage closer in a struggling real estate market. She went back to school to prepare for a new profession, but was soon called into the machine shop that her father opened two years earlier to help with production. Lisa would spend the next 23 years learning and running the business at JR Larson Machining—from ordering materials to programming the machines to milling parts. “At a fundamental level, a machinist needs to know how to problem solve. How am I going to hold this metal in the vice? How am I going to make this work? What am I going to use to make this work?” she explained.

The shop initially housed two manual Bridgeport mills, which is what Lisa cut her teeth on, before adding three-axis CNC machines (much like Protolabs) a few years later. Production fluctuated in volumes of one to 500, primarily milling parts from 6061 aluminum alloy, but also from a small percentage of plastics like Delrin, Ultem and nylon. Much of their early work was for devices used to check circuit boards against weather environments. They also produced industrial parts for machines that labeled various consumer products and developed a program that made ATV license plates.

The staff at JR Larson was both figuratively, and literally, small. Up to 15 or so temp workers would be brought in when workload dictated, but the shop was essentially a team of three—Lisa, her father and a role that was filled by a rotating cast of canine companions most recently held by her current pup, a Maltese Yorkie named Henry Bobber. Henry’s predecessors included, in no particular order, an English Bulldog, Boxer, Yorkie and Shorkie (Shih Tzu Yorkie).

“I was always very confident in my machining knowledge, so no one could use that against me to make me stumble.”

In 2010, Lisa officially purchased the company from her father. What was it like working at, and then owning, a machine shop? She describes the challenges of being a female in an industry that remains weighted towards men. Lisa would get openly criticized by some customers who specifically wanted her dad to set up and run their parts—especially during her first years as a machinist. “I encountered trust issues. I’d get tested with how much I knew, how fast I could do things,” she said. “But I was always very confident in my machining knowledge, so no one could use that against me to make me stumble.”

In the instance that a customer would request a man-made part, they would get directed back to the one who knew how to best mill that part—Lisa. “I’ve always said, don’t ever assume who you’re talking to on the phone or in person. You don’t know. You could get the janitor, or you get the owner,” she said. “I can have long fingernails, and machine a part, too. I just can’t wear high heels [laughing].” Lisa turned the lights off at JR Larson Machining for the last time earlier this year, closing down the shop after two decades of production. The combination of a tough market and a desire to spend more time with her family led to the difficult decision.

“My time there was wonderful, and it was heartbreaking to close, especially after all of these years,” she said. “When you’re ordering metal, cutting metal, and running the machines yourself, and have no sales staff, it was too hard to fight the economy.”

In May 2014, Lisa started a new manufacturing adventure at Protolabs. She’s applying the hard-working ethic that was forged during 18-hour work days at the shop to her new position as an applications engineer. AEs work with a customer’s part geometry, material selection and other design considerations that can improve the manufacturability and production of their parts. As she transitions from paper blueprints and manual milling to 3D CAD models and automated toolpaths for molding, she’s training herself to think in the negative by looking at molds that will make the parts, rather than the parts themselves.

With years of manufacturing experience and a strong voice, Lisa’s refreshing perspective is a welcome addition. “Yes, I can sew really well, but I can also turn a wrench or climb onto a pallet to reach the top of a Bridgeport mill. I was taught that it was ok to get dirty, so get over here, let’s go.”