Where Are They Now: Bose Acquires Cool Idea Award Winner 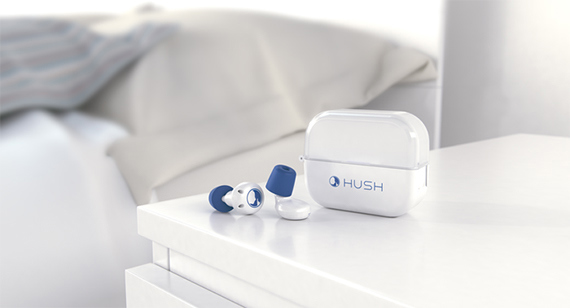 Hush earbuds are ultra-thin and wireless and include a compact carrying case that doubles as a charger. Photo courtesy: Kickstarter

Combining sound-eliminating foam and noise-masking technology in a completely wireless design, Hush keeps unwanted noise out while allowing important alerts in. Hush allows users to sleep through snoring, loud neighbors, traffic, and a host of other noises that disturb sleep without blocking out necessary sounds such as soft, soothing white noise or ocean waves, and alarm clocks.

Hush was developed and founded by University of California-San Diego engineering undergraduates, who were aided along the way by Protolabs’ Cool Idea Award. The award, since 2011, provides up to $250,000 annually in product prototyping, testing, and low-volume production services to entrepreneurs developing new products. Unlike other product awards that recognize products after they’re in mass production, the Cool Idea Award is geared to help innovative ideas come to life. For Hush, Protolabs provided 3D printing and injection molding services for prototyping and initial product runs.

As Larry Lukis, Protolabs’ founder, said at the time of Hush’s Cool Idea Award announcement, “The potential to improve the quality of life for millions of people is a large reason why we want to help make Hush a reality.”

During its development since 2015, Hush also benefitted from Kickstarter and Indiegogo fund-raising campaigns.

Boston-based Bose, which manufactures and distributes electronic products, acquired Hush last November. Details of the deal were not disclosed. The company is now integrating the Hush product into its noise-masking sleepbud product line, currently featured on Bose’s website.

Have a great idea but need a little help getting it off the ground? Click here to start your Cool Idea Award application!