Will the Promise of AR, VR Ever Become a Reality?

A recent estimate by Goldman Sachs reports that augmented reality (AR) and virtual reality (VR) are expected to grow into an $80 billion to $90 billion market by 2025. But will the promise of AR and VR ever move beyond the technologies’ current niche in the gaming and video entertainment segments? Some industry insiders say yes, that AR and VR’s time has arrived. Here are four recent examples that show this might be true.

As Forbes recently reported, these technologies have been applied in education for some time now. “Virtual environments allow students to practice anything from construction to flight to surgery without the risks associated with real-world training.”

In addition, the Forbes article noted that Wal-Mart announced it is using 17,000 Oculus Go headsets to train its employees in skills ranging from compliance to customer service. One other example is right here at Protolabs, where we have been using AR to help train welders and other workers at our new sheet metal facility in New Hampshire. 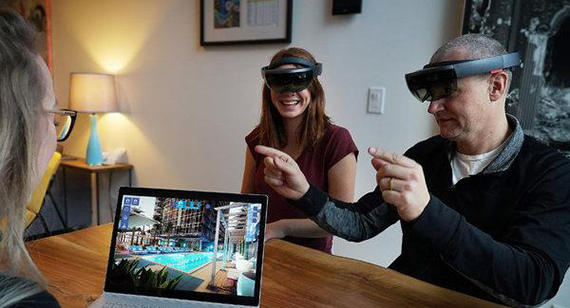 The commercial real estate industry is using AR and VR to market buildings, sometimes before they have been built. Here, American Life used a VR technology platform to show off a new hotel in Long Beach, California. Photo: New York Times.

AR in Your Car

Forbes also noted that in-car AR will be a prime addition in new vehicles in 2019. Nvidia’s DriveAR platform uses a dashboard-mounted display overlaying graphics on camera footage from around the car, pointing out everything from hazards to historic landmarks along the way. Audi, Mercedes-Benz, Toyota, and Volvo have signed up to work with the technology. Alibaba-backed startup WayRay has a slightly different approach, projecting the AR data directly onto the car windshield, giving navigation prompts, right-of-way information, lane identification, and hazard detection.

In the world of commercial real estate, the New York Times recently reported that developers, architects, brokers, and builders have started to use AR and VR technologies as a way to save money and time in leasing and construction. For example, residential brokers had been using these tools to market their buildings before they had been built, so, more recently, commercial real estate brokers followed suit. An example cited in the story was Newmark Knight Frank, a New York-based commercial real estate company, which used virtual reality tours to secure interest for its new office building in the Williamsburg neighborhood of Brooklyn before construction began.

“The VR certainly provides a different level of experience than a brochure,” said David A. Falk, president of the Connecticut, New Jersey, and New York region for Newmark Knight Frank.

Using cutting-edge technology to market a building can also help draw technology companies, which can often be the most desirable office tenants. Plus, potential tenants can also influence the design of a building if they can explore it before it is built. Oracle, for example, used AR to solicit input from employees and partners for an innovation lab the software company is building in Deerfield, Illinois.

Military Use of AR, VR

As ZDnet.com has reported, the U.S. military has quietly but aggressively deployed AR and VR in training and on the battlefield. For example, Army soldiers have been learning urban combat techniques in so-called Synthetic Training Environments that accurately reflect foreign cities. Other products include a gunship crew trainer for the Air Force and virtual parachute training, among other scenario-based modules. Additionally, tactical augmented reality has made its way into helmets and military vehicles.

Indeed, the defense segment appears to be emerging as a prime user of this technology. ZDnet reports that one study showed the AR/VR defense market will be worth $1.79 billion by 2025, up from $511 million in 2017.

Industry Spotlight is a regular look at manufacturing trends in segments such as electronics, automotive, medical/health care, and aerospace.