While still a relatively new technology compared to other manufacturing methods like injection moulding and CNC machining, 3D printing has come a long way in recent years and is now more widely accepted across a variety of industries. Just this year, three giants in the automotive world - Porsche, Formula 1, and Ford - all announced new ways they are leveraging the technology.

Additionally, the electric vehicle (EV) sector recently started using an additive approach to inverter design to increase efficiency in production and the components themselves. Across Europe, Audi, Ford, and Alfa Romeo Racing ORLEN have all increased their 3D printing fleets.

Porsche recently built the first complete electric drive unit housing to be fully manufactured through 3D printing. The prototype, which contained the engine and gearbox, passed quality and stress tests with no issues. The benefits of manufacturing the unit this way meant it was lighter weight with doubled stiffness in highly stressed areas. "This proves that additive manufacturing with all its advantages is also suitable for larger and highly-stressed components in electric sports cars," said Falk Heilfort, project manager in the Powertrain Advance Development department at the Porsche Development Centre.

One of the key elements of design in automotive is weight. Additive manufacturing empowers automotive designers to create complex parts that are much lighter than the counterparts which use additional material in their designs. Reducing the weight of automotive parts also has a wider positive effect on the environment, because lighter cars consume less fuel and energy in order to run. 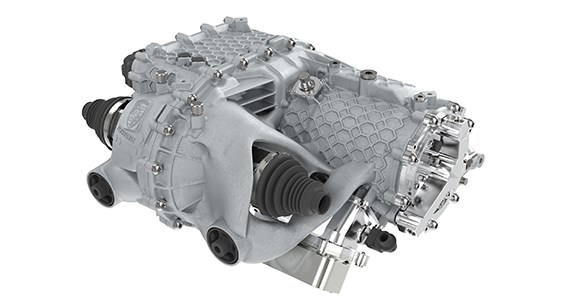 Formula 1 is exploring a new way to use additive manufacturing to make automotive parts. Rather than 3D printing the parts themselves like Porsche, the international auto racing organisation is using printed moulds in its engine manufacturing.

Designers created an engine block mould design to be additively manufactured using sand and hardeners. Molten metal is then poured into the printed mould to create the blocks in a process that provides greater precision compared to traditional tooled moulds. This technique allows engineers to experiment with different types of sand, glues, and hardeners to control how the aluminium cools in the mould to strategically impact how the final product will turn out. 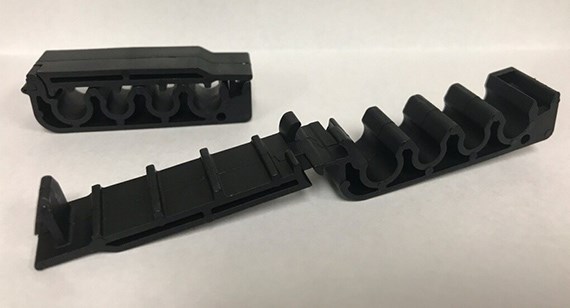 Ford Puts Recycled 3D Printing Waste to Use in F-250

Over in the U.S., Ford and HP are partnering to convert recycled 3D printing material into injection moulded fuel-line clips for Ford's Super Duty F-250 trucks. In addition to forwarding Ford's sustainability initiatives, the move described as an industry first, actually produces parts with better chemical and moisture resistance that are 7% lighter and 10% cheaper to produce compared to conventional parts moulded using fresh material.

"Many companies are finding great uses for 3D printing technologies, but together with HP, we're the first to find a high-value application for waste powder that likely would have gone to landfill, transforming it into functional and durable auto parts," said Debbie Mielewski, technical fellow at Ford.

The excess material being used to mould the fuel-line clips comes from the HP Multi Jet Fusion printers in use at Ford's Advanced Manufacturing Center in Michigan to produce other auto parts, as well as donated redundant 3D-printing material from businesses like dental company SmileDirectClub. After collecting the material, it is sent to outside manufacturers to turn the waste powders into polymer pellets suitable for injection moulding and mould those pellets into the end-use fuel-line clips.

Working to expand the initiative, Ford and HP have found 10 other fuel-line clips on other vehicles suitable for the recycled material moulding process and are working on mould designs for those parts next.

The UK's newly established Institute for Advanced Automotive Propulsion Systems (IAAPS) at the University of Bath is exploring ways that 3D printing can benefit the production of electric vehicle inverters. A multi-disciplinary research team is working on a project looking at the possibility of 3D printing select inverter components. If successful, additive manufacturing these components would help EV makers overcome constraints including thermal management, electrical noise, and packaging volume.

"[SiC (silicon carbide) semiconductor devices] offer so much opportunity to improve inverter performance, but system designers are often unable to take full advantage of their potential because their ideas cannot be manufactured using conventional techniques. Additive manufacturing lets us design in 3D without these constraints, and we see great benefit in applying the technique to EV inverters. These have a significant impact on how hard you can drive other components of the EV powertrain, so even a modest advance can create a virtuous circle of improvements in efficiency, packaging, and energy density for tomorrow's EVs," said Peter Wilson, the professor leading the IAAPS study. 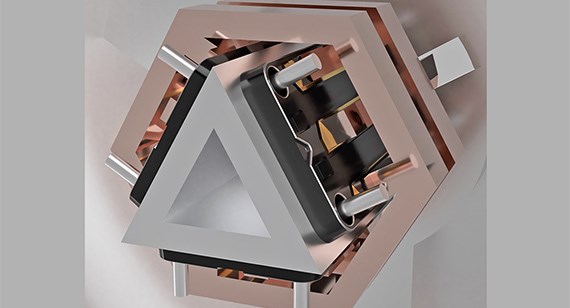 Concept for the IAAPS’ single piece triangular element in the center of the inverter. Photo Courtesy: University of Bath

Currently, inverters are designed in a 2D process where flat component boards are stacked with a thick aluminium liquid-cooled cold plate at the bottom. However, the efficiency, reliability, and performance of the inverters drops as temperature rises. The team hopes 3D printing can solve this, as it allows for a complex lattice internal structure with walls less than 1mm thick in the cooling plates, a more effective cooling solution than the plates with machined cooling channels.

The 3D printed design is also lighter and carries a higher current, making the inverter significantly more power dense. Its more compact assembly means less distance between switches and gate drivers, leading to a more effective Electro-Magnetic Interference. This allows the switches to operate at faster speeds, taking full advantage of the SiC technology compared to the traditional solution.

While this project is still in its early stages in the UK, additive manufacturing in automotive applications is spiking across Europe. In the past three months, Ford became the first carmaker in Europe to add a large format 3D printer to its fleet, Audi began using 3D printing to produce hot form tooling at its Metal 3D Printing Centre, and the Alfa Romeo Racing ORLEN Formula 1 team doubled use of 3D printed parts in its C41 race car. With benefits including lighter weight, more complex, and more complete parts, the shift to additive manufacturing for automotive shows no signs of slowing down.