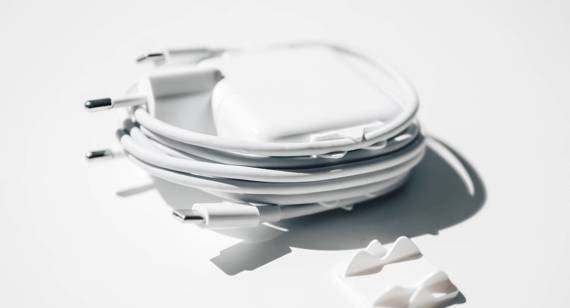 Many people have good ideas but more often than not they hit a barrier when it comes to putting them into practice...

... but not Vladislav Svetashkov. After growing tired of the constant tangling of cables marring the fun of using high quality tech products he set out to find a solution.

The graduate business economist and Managing Director of Brezzl began drawing sketches and folding paper models. The aim was to produce a minimalist winding aid for Apple products that could be attached relatively inconspicuously to the device’s plug. Often the entire cable length isn’t needed so partial unwinding would also be an advantage. The result is a discreet pad that attaches to the plug.

There are small clamping wings on the outer sides for the beginning and end of the cable. Clamp, wind, clamp – and everything’s shipshape again. The “Cablewings” name came about almost by itself, then it was time for the critical step of turning idea into reality.

Nowadays, CAD drawings are essential for production. Svetashkov turned to a freelance designer and together they produced the relevant models that matched his ideas. It was clear that Cablewings should be made of plastic, the question was: which plastic was suitable and who specialised in low-volume production at appropriate prices? The normal route is to produce a steel mould as the tool for injection moulding. The costs for this, however, are enormous and the lead times to implementation are considerable.

An Internet search for production possibilities and a tip from a friend led Svetashkov to our rapid injection moulding service, which delivered the first Cablewings production parts within a few days.

Svetashkov implemented his innovative Cablewings cable winder within no time at all, winning a Red Dot Award: Product Design 2018.