Originally a traditional locksmith company, Birmingham-based 1st Call Lockouts Limited has diversified into training services and has also introduced a trade counter. However, the company’s latest plan to tap into a new revenue stream provided some very different challenges.

1st Call’s aim was to enter the automotive locksmith market in which, thanks to the advent of central locking, a lost or stolen car key today requires far more than a trip to the local keycutter. Most modern car keys feature an electronic coded chip (transponder) and 1st Call planned to offer the market a quick and cost-effective method of programming these transponders without an expensive visit to the car dealer.

1st Call’s solution is called TouchClone™: “keys cloned at a touch”. Essentially, the product is a merger of technologies incorporating a traditional transponder, an electronic reader, and a cloning device. This three-in-one functionality makes TouchClone unique; its cost is less than half that of existing technologies. 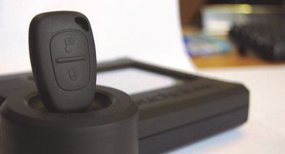 One of the biggest manufacturing challenges the company faced was designing a suitable enclosure. Investors were particularly keen to see and feel prototype products made from real engineering materials, rather than those used in RP processes.

As the world's fastest source for custom CNC machined parts and injection moulded parts, Protolabs is perfectly placed to help during the early stages of the design process. The company works with its customers helping to improve manufacturability in order to minimise time and cost. In the case of TouchClone, 1st Call Lockouts approached Nebulem (www.nebulem.com), a product design agency with offices in London and the West Midlands.

Michael Hims, Project Manager at 1st Call Lockouts, explains: “We gave Nebulem a design brief and a specification to work with and they returned with various concepts for the enclosure. We picked our favourite and Nebulem developed the design from there. We were completely new to CNC machining and relied on their guidance. Within two weeks we had finalised a prototype design. I have to say, their professionalism was very impressive.”

According to 1st Call Lockouts there were several ‘goals’ that the design had to achieve. Firstly, the company wanted to emulate the ‘tablet’ format currently popular for portable PC devices. The product also had to be comfortable to hold, offering smooth edges and rounded corners.

Attractiveness was also high on the list of priorities, while in terms of branding, the company wanted the product’s name to appear in large letters on the front cover (beneath the screen).

To test the design concept it was passed to Protolabs. Using the company’s on-demand CNC machining service, two prototypes were produced, in nylon.

“Such was the accuracy of the machined samples that we were able to use the prototype covers to scrutinise the entire product design very closely,” says Mr Hims. “I think we moved a couple of connector points and board supports, which we did in consultation with Nebulem to ensure we weren’t ‘upsetting’ the product’s manufacturability in any way. Once we had finished our design review and applied feedback from investors we were able to move towards a final moulded solution based on a blend of ABS and polycarbonate. The casing had to be splash proof to protect the 6-inch screen and electronics inside. Again, we called upon Nebulem, who advised us on many design aspects. They were also very helpful relating other issues in injection moulding to us that we were unfamiliar with, such as draft angles to aid release of the product from the mould.”

"Such was the accuracy of the machined samples that we were able to use the prototype covers to scrutinise the entire product design very closely." 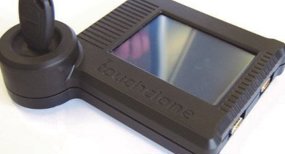 Protolabs’ design reviewing system also played a very important part in the early stages of the design process. Credited by Nebulem as “getting everyone on the same page”, the company claimed it worked extremely well throughout the TouchClone development phase and allowed the project to be managed simply from start to finish. Nebulem, which has a history of successful collaboration with Protolabs, says it acts as a vital link between clients and Protolabs’ services where projects require product design expertise.

When TouchClone is in production, volumes are likely to be hundreds-off, or low thousands, which makes the rapid injection moulding process the perfect manufacturing solution. With first tooling complete and the first production run undergoing field trials, public launch occurred in April 2012. Considering their first prototype was delivered in July 2011 – that’s fast!