This small badge is playing a big role in helping tens of thousands of employees get back to work at companies large and small after the COVID-19 pandemic largely shut down economies around the world.

The badge - part of the Instant-Trace contact tracing and social distancing system - flashes red LED lights and vibrates when wearers are in proximity to reinforce positive social distancing. If an employee is diagnosed with coronavirus, an employer can quickly determine who has been in close contact with that employee and make instantaneous decisions about who needs to test or self-quarantine and who can keep working. This has helped Instant-Trace customers resolve COVID-19 contact tracing cases in hours instead of days, keeping worksites and business units operational.

Fleetwood Electronics first developed the Instant-Trace system so its 120 employees could return to work safely, according to Nick Hayhoe, vice president of sales.

Beyond its value to the company, Fleetwood leaders knew Instant-Trace would help other businesses get back to work, too. Speed to market was key to winning business in the increasingly competitive race to provide employers with COVID-19 risk mitigation solutions.

Members of the Fleetwood Electronics team conceived the Instant-Trace system on a Friday night in early April. By the following Monday, designs for the electronics, software, and badge housing were in hand. Just six weeks later, Fleetwood, which now has multiple patents pending on the system, began making its first Instant-Trace shipments.

To satisfy Fleetwood’s need for speed, Hayhoe turned to a source he had used since at university - Protolabs. Hayhoe used our automated quoting and design feedback system to have machined prototypes milled for the badge housing, and our on-demand manufacturing capabilities to produce end-use injection-moulded housing components - each run within a matter of days.

Lighting the Way to Social Distancing at Work

Fleetwood’s electronics division has produced low-power wireless devices since the 1970s and hospital badges for more than a decade. Building from that experience, the electronics team designed the custom Instant-Trace badge from the ground up specifically for contact tracing and social distancing. 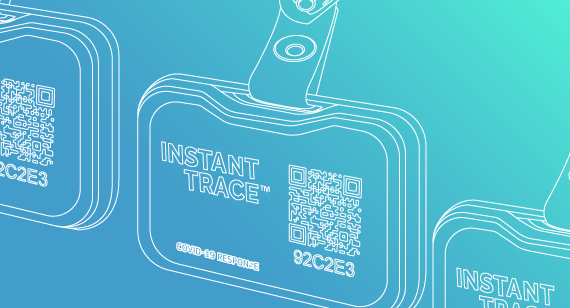 The badge is accurate within 6 inches, Hayhoe said. That accuracy comes from using Ultra-wideband (UWB) short-range wireless technology, which Hayhoe said is much more precise than Bluetooth, which is accurate within about 6 feet. Fleetwood’s custom UWB protocol gives the badge a battery life of two months and in some cases more than three months compared to other UWB products that require daily recharging. 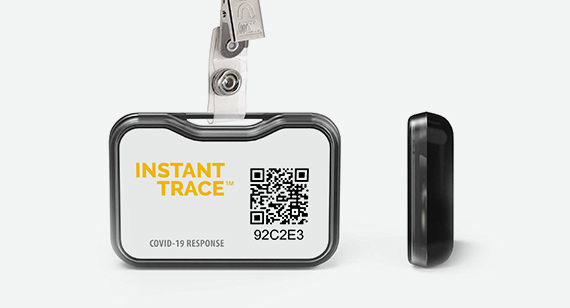 Setting up the Instant-Trace system is a simple process. Operators simply need to enter employees into a roster in the dashboard, assign badges and hand them out to employees, who scan their badges at the Wi-Fi-connected kiosk. Instant-Trace tracks badge-to-badge distance between employees and not employee location. That way the system doesn’t require anchors, beacons, or other infrastructure that some similar products require to triangulate employee location within a workplace.

Hayhoe worked with a local industrial designer on the aesthetic of the badge housing, which has front and back parts that screw together. With his modelling experience, he was sure that the circuit board would fit inside the housing and that the parts would fit together well. He used an in-house 3D printer to test out the housing design.

Mouldability issues centered on a button on the back of the badge, Hayhoe said. He needed the button to flex and feel right to the wearer, who uses the button to turn the badge on and off.

While the back of the badge is black, the front part of the badge needs to be translucent so wearers and those nearby can see the LEDs blinking from inside the finished housing, Hayhoe said. We supported the material selection process to choose a material that is ideal for light diffusion.

Hayhoe moved from in-house 3D printing to our CNC machining service to test his housing design in material similar to what he anticipated using in end-use Instant-Trace production parts.

He spoke with our technical support team almost every day for a couple of weeks while finalising housing and electronics designs. He got feedback on improving manufacturability of the badge housing from technical support. Our automated quoting system helped him visualise changes he needed to make to the housing before having prototypes made.

Before moving to on-demand moulding for end-use parts, Hayhoe got further advice from technical support on specific blends of polycarbonate to use that would offer sufficient light diffusion properties to allow the flashing LEDs to be seen from the front of the badge.

Hayhoe first used the online quoting system during his university days, when he was a professor for advanced product design students, uploading CAD drawings of parts to get design feedback. He has continuously uploaded models to see if they’re mouldable, even if he’s just testing out an idea that comes to mind. 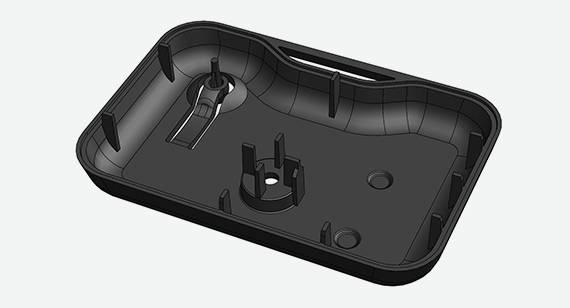 Hayhoe credits our quick turnaround on machined prototypes and moulded end-use parts for helping Fleetwood hit its initial ship date target in mid-May. Fleetwood saved $20,000 on tooling costs for moulded parts at Protolabs and got tooling four weeks sooner than it would have from a traditional source.

Getting to market a month sooner helped Fleetwood win Instant-Trace business with one of its first customers, a Fortune 100 pharmaceutical company that now is one of its biggest customers.

That customer “chose us because we had the right product at the right time,” Hayhoe said. “If we had launched a month later because we were waiting for tooling, we would have missed that opportunity.”

Since launch, Instant-Trace has gained traction in an array of markets. Fleetwood originally thought manufacturers -that must have employees on site - would be the primary market. More than half of badges shipped have gone to offices, from financial and legal firms to corporate headquarters.

An unexpected source of sales has been the film industry, as productions seek to return to work safely, Hayhoe said. Construction companies are using Instant-Trace on job sites as are food processors and ecommerce fulfilment companies.

“We are looking at some other products to add to the Instant-Trace family and we’ll be using Protolabs again,” Hayhoe said.