A shot in the arm for next generation diagnostics

Improving a diagnostic test that has long been a bottleneck process in the medical device sector was the aim of a small yet ambitious Scottish company, which is rapidly becoming the leader in its field. With excited users, distributors and investors eagerly awaiting PyroXpress™, the time to market of this groundbreaking test-unit hinged on the speed and quality of parts provided by the rapid injection moulding service from Protolabs.

Bacterial endotoxin contamination is an issue all medical device manufacturers need to be aware of. Clinical implants, and all vaccines and drugs delivered by injection, have to meet strict guidelines to ensure that they are free of toxin. Releasing contaminated product to market risks product recalls, fines, and even closure of manufacturing plants.

Currently, the hefty cost of setting up a capable testing station at each manufacturing site means that most manufacturers send away samples to specialist contract laboratories. However, this means large batches of medical supplies can sometimes be left waiting in quarantine, often for days, awaiting product release. 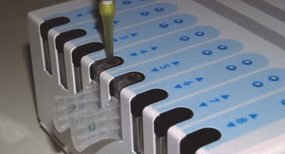 It was clear that the industry needed test equipment that was far cheaper and could be used quickly, by anyone, on-site at the factory or plant,” states Emma Day, Technical Director at Inverness-based Highland Biosciences Ltd. “However, the speed of the unit could in no way compromise the quality and reliability of the test results – this is a nasty toxin that comes from bacteria including E. coli and Salmonella. Our customers will rely on this test to provide assurance before expensive devices and vaccines are released to market.”

The design comprises an eight-channel reader unit into which disposable plastic cartridges containing samples are slotted. The test starts automatically upon detection of the sample, with results appearing within 5 minutes. No special skills, tools or environmental conditions are required and the equipment offers a price tag that is an order-of-magnitude less than conventional chromogenic or turbidimetric kinetic systems. The company calls its new device, PyroXpress™.

“One of the main challenges was developing the cartridge, a plastic component measuring around 40 x 25mm that comes in two parts – top and bottom – and also features a small handle,” says Emma.

Initially, Highland Biosciences experimented with rapid prototyping based on stereolithography (SLA) technology, but the results were far from satisfactory.

“SLA didn’t work for us primarily because we couldn’t use the actual design material, and also because SLA models can shrink, go soggy and often offer poor presentation. We were facing-up to either using the wrong material or paying for an expensive hard tool for injection moulding – until I saw the Protolabs website that is, at which point I was ecstatic. Because the cartridge is disposable it was vital to achieve the correct design as we could potentially end up making millions.”

"The complimentary design for manufacturability analysis on the Protolabs website is fantastic." 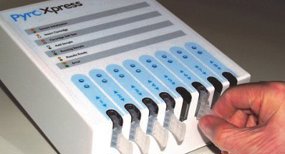 Emma admits there were more than a few design revisions during the course of developing the disposable cartridge, a process made more difficult by stringent deadlines for demonstrations of PyroXpress™ to potential customers.

“We took the design to its limits and gave Protolabs a terrible time,” she says, “but I have to say they took it all in their stride. The automated design for manufacturability analysis on the Protolabs website is fantastic and provides the reassurance that features such as draft angles and radii are in the right places. To many people, a rapid service is often met with a response such as ‘if you pay a premium we can do it in two weeks’ – and that doesn’t include the quoting process! Using Protolabs we were getting a turnaround of 3-5 days for typical batches of approximately 1000 parts! Protolabs also pulled out all the stops to supply clean parts, and as a result we witnessed very little in the way of background contamination.”

Using Protolabs, Highland Biosciences was also able to trial many materials with different design properties. From the performance data derived by this iterative process, the company settled on a final design material, which remains a closely guarded secret. In total, the project has already generated four patents worldwide, with more in the pipeline.

PyroXpress™ differentiates itself from alternative tests because it is based on specially developed multi-beam resonator technology that provides the sensitivity levels required for quick and accurate results.

“With the help of Protolabs we have turned this test on its head,” concludes Emma. “The speed and reliability of PyroXpress™ will eliminate the need to quarantine or scrap batches due to endotoxin non-compliance.”

PyroXpress™ is currently being scaled up to full manufacture and hard tools are in production. A starter pack will be available later this year offering: a PyroXpress™ eight-channel reader; 500 disposable cartridges ready to use; and a 12 month support package including two days of method development and validation.