Lives in the UK are being saved after Protolabs’ rapid tooling service helped ramp up production for a crucial breathing aid used in the fight against COVID-19.

‘Unprecedented’ is a word that has become almost as evident as the pandemic itself in recent weeks, as commentators and Governments try to make sense of the current global situation.

It has been used at times to describe the way capacity in health services across Europe are being increased. Whether that is through the building of temporary Covid-19 hospitals or the PPE logistical operations required to ensure frontline staff are as protected as they can be against the virus.

We have also seen ‘unprecedented’ collaboration, none more so than in the manufacturing world. Formula 1 teams, aerospace suppliers, augmented reality experts, designer fashion labels and countless SMEs have all pivoted their operations to look at ways they can support.

Protolabs is one of the firms that has been involved in the fight since the outset. Its ability to accelerate manufacturing and speed of production is playing a critical role in producing ‘Charlotte and Dave’ valves’ that turn scuba equipment into ventilator masks and in speeding up the emergence of critical medical test equipment by AusDiagnostics.

The company, which employs 450 people at its European Headquarters in Telford, has also joined forces with Mercedes-AMG High Performance Powertrains (HPP) and University College London to support the development of its CPAP device.

The Continuous Positive Airway Pressure system will help coronavirus patients with lung infections to breathe more easily and was a joint round-the-clock effort to reverse engineer a device that could be manufactured rapidly in its thousands.

Using the engineering expertise of Mercedes-AMG HPP and UCL, it took fewer than 100 hours from the initial meeting to production of the first device for evaluation and regulatory approval, which was granted at the end of March. 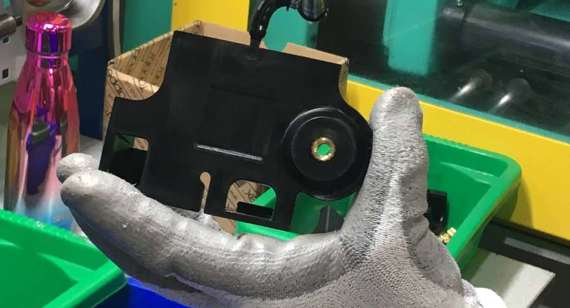 The Government committed to ordering 10,000 CPAP devices, signalling the start of production and Protolabs being approached to produce two new tools that could make ten thousand brackets to hold the device next to the patient’s bed.

At the same time, Mercedes-AMG HPP’s purchasing team also requested a third tool, which would manufacture a cap to shield the air entry.

“Speed was of the essence for this project, as we needed to get the CPAP systems to the NHS as soon as possible,” explained Baninder Kaur, Strategic Account Manager at Protolabs and a key member of the team working with Mercedes-AMG HPP.

“Within a few hours of the call, we had mobilised a dedicated design and manufacturing team to review the bracket’s design for manufacturability and offer suggestions on how stringent deadlines could be met.”

She continued: “This led to four quick iterations, material verification for both parts and the decision to make the bracket using two tools, allowing us to reduce lead times by running production simultaneously.

“There were also some slight adaptions to the cap, with our engineers exploring the possibility of using one tool with two cavity moulds that would hit the 1100 daily required parts. Importantly, this would also give the client complete control in terms of accuracy - vital when dealing with the medical sector.”

Parts were analysed through its proprietary software, initially for quoting and then to generate the pricing and complete the Design for Manufacturing. Automated turn time was calculated but expedited further when manually inspected with a view to the urgency of the requests.

When the order was placed, software was again used to design the tool, following use of Mouldflow to determine the best location for gating. This created the shutoff and separate components for the tooling.

Toolpathing was then performed on the cavities, using a wide variety of carbide cutting tools, before numerical controls were created and sent to the 3-axis CNC milling centres tasked with carrying out the manufacturing. 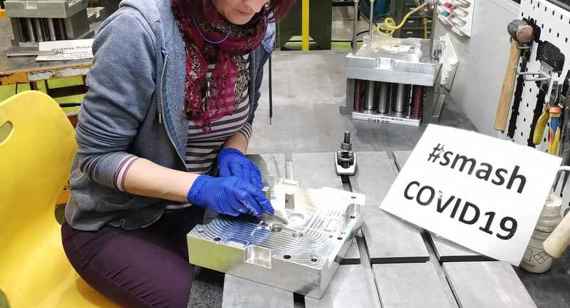 Initial sample parts, made in nylon 30% glass fibre and Acetal co-polymer, were sent out for inspection and, following a successful outcome, run rates of 1100 parts per day for each component were agreed.

Protolabs started moulding in the evening (April 9th) and, thanks to a time and motion study, the manufacturing team immediately identified ways to optimise the cycle time.

Staff agreed to support the production process over the Easter Bank Holiday, ensuring all breaks were covered and full volumes were completed within 72 manufacturing hours. Parts were collected at five different intervals over this period to support lineside production at Mercedes-AMG HPP.

Once assembled, the CPAP devices and equipment are being sent to 250 hospitals across the UK to help frontline staff continue to provide the best possible care for COVID-19 patients.

“Protolabs employees continue to play a vital role in helping us support the needs of our customers in what is a generation-defining moment. I am extremely proud of the commitment and expertise everyone is showing and I am humbled that, in our own way, we are supporting frontline workers to save lives across the world.”

“These life-saving devices will provide vital support to the NHS, helping to keep patients off ventilators and reducing demand on intensive care beds and staff.

“It is a phenomenal achievement that they arrived at hospitals only two weeks after the first prototype was built. It shows what can be done when universities, hospitals and industry work together for the national good.”