Richard Sant is excited for OceanLED’s future in the private super-yacht market. On his office wall is the blueprint for one vessel measuring 148m in length; it will have six engines, several decks, the finest materials and most importantly, lots of lights. Despite sumptuous ships like this costing in the region of 100s of millions of pounds, business is booming.

To build on their success, OceanLED’s strategy is to move beyond the bespoke market of super-yachts in which it started to develop relatively highervolume products for other growth sectors; a plan that involved a fundamental rethink of the firm’s manufacturing techniques which inevitably led them to begin using rapid injection moulding. 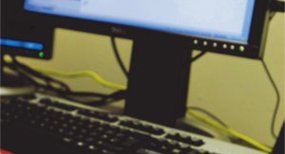 OceanLED (www.oceanled.com) is a young company but it has a long pedigree. Chief Operating Officer Nigel Savage has more than 25 years experience at the forefront of the marine and architectural lighting industry. He originally set up OceanLED to produce simple, maintenance-free marine lighting but went on to develop what many in the industry regard as the world’s most advanced underwater lighting system.

Owners, designers and builders of super-yachts demand OceanLED’s state-of-the-art Light Emitting Diode (LED) products to give their yachts that special touch of elegance, including the firm’s trademark ‘unbroken halo of light.’ However, the company is now pushing into the fast-growing private boat market and, as Richard Sant points out: “The USA is probably the biggest opportunity because so many people own private fishing and sports boats.” Hence the need for lower-cost, higher-volume products for direct sale to consumers, as well as the firm’s traditional bespoke lights for original equipment manufacturers (OEMs) such as Marquis Yachts and Viking Sports Cruisers.

Although OceanLED designs and assembles its lights in-house it doesn’t manufacture any of the components. Instead, they choose to partner with very carefully chosen UK engineering companies. For example, the complex lens components come from one specialist supplier, while the big Aluminium-Bronze light housings – as used on super-yachts, and costing thousands of pounds – are supplied by another.

The new, smaller consumer lights are made from polymers which means they can be mass-produced economically and demand is growing; compared to traditional light sources LEDs are very energy efficient and produce less heat. As a result, boats can use more light units, look great and still keep their weight and energy costs low. And LEDs don’t just appeal to the marine sector – they are increasingly used to illuminate docks, swimming pools and buildings.

Richard expects particularly strong demand for the firm’s latest Amphibian range which can be used above and below water.

These advanced, high-output lights use injection moulded polymer bodies that still manage to contain all the drivers and the dimmer functions, so “providing superior operation and versatility with fewer components and connections.”

As Richard points out, OceanLED had no experience of making plastic injection moulded parts for lights. “Although I’d been using Solid Works to design mechanical products for a long time, this was my first plastic injection moulded product. Like most people venturing into plastic mass production, we started by using a company in China but became increasingly unhappy with the quality and costs. So, we looked for someone who could do a better, faster job – that’s when we found Protolabs.”

Richard, who joined OceanLED in 2005 after a long career as a mechanical design engineer, was particularly pleased with Protolabs online ProtoQuote service. This enabled him to upload his existing 3D CAD designs and receive not only a detailed breakdown of manufacturing costs but also a report highlighting any design issues, literally within hours. “The Protolabs process allows an injection moulding novice to design and order a part without any problems,” he says. “It gave us complete control and it’s close to home – it’s good to know we are using the best option and it’s a company in the UK.” 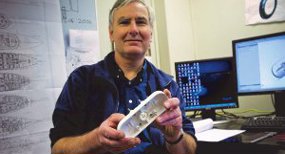 At first OceanLED used Protolabs to make prototypes of the various mounting brackets for all three models in the Amphibian range, including the ‘foot and bridge’ components that make up the clamp. “Originally, we thought of making the mounting kit in steel,” said Richard, “but it was ugly and expensive.” Above all, he wanted the mounting system to be versatile, which meant being lightweight, strong, low-cost and able to fit as wide a range of mounting points as possible. He found using ProtoQuote was ideal for optimising the design because you can upload as many modifications as you like. The processing speed of the Protolabs® compute clusters means you get your analysis results in hours.

“Protolabs makes and gives away various educational ‘toys’ to help explain the technicalities of rapid injection moulding – but we soon realised they are definitely not gimmicks,” Richard stresses. “We found them very useful, especially the ‘cube’ and the ‘puzzle’. They helped us understand the process, the characteristics of different plastics and what’s possible. As a result they saved us time and money.”

Once OceanLED had finalised the design of the mounts, it was able to order relatively low volumes of production-quality parts from the same mould. As a result the kits can be sold separately and retail for around £15-20. “At the moment, we only order 500 each time,” says Richard. “If we were using traditional steel moulds in China we would have to run off thousands just to make the tooling economical.”

Looking ahead, Richard Sant sees even more promise in the architectural lighting market. “Our lights are essentially the green alternative to traditional lighting, which means they are valuable as both decorative and functional building lights. This is an excellent market opportunity and we intend to make the most of it, with the help of Protolabs.”