Thorlabs reduced the time to market for its new motorised polarisation controller by several months using Protolabs design analysis, prototyping and on demand manufacturing for its outsourced parts.

The polarisation controller is a highly technical device for controlling the polarisation state of light. Polarisation specifies the geometric orientation of light waves, so controlling this is relevant to a variety of applications such as optical communication, fibre optic sensors, PDL measurement and component testing. The device produced by Thorlabs optimises the alignment of light as it travels through various sensitive optical components by spooling, looping and twisting a fibre using the spools of a polarisation paddle. Using a motor for the polarisation paddle gives better repeatability of the looping and twisting of the fibre when compared to doing it manually.

Generally used by laboratories, the specialist equipment is produced in low volumes and needs to meet exacting standards.

Thorlabs needed to outsource parts for the housing for the motors and other areas. Before moving to final production, the company needed to test the designs to confirm material selection, motor performance, screw hole sizes and other factors.

“The fact that Protolabs could provide design feedback within a couple of hours after we uploaded our CAD into its design for manufacturability analysis software, rapid prototyping of the parts, and a low volume injection moulding solution that keeps the cost per part down was invaluable.”

Philip Storey, senior engineering buyer at Thorlabs, commented: “The new product is highly specialised equipment that needed a lot of development and testing before production. The fact that Protolabs could provide design feedback within a couple of hours after we uploaded our CAD into its design for manufacturability analysis software, rapid prototyping of the parts, and a low volume injection moulding solution that keeps the cost per part down was invaluable.

“This joined up thinking makes a lot of sense for specialist manufacturers who need low to medium volumes of parts like us.  It also meant that that the prototype designs and material had the final production process in mind.”

Protolabs produced a number of prototypes using stereolithography 3D printing. A process using thermoset resins cured with ultraviolet light, it offers a broad material selection with a large range of tensile strengths, tensile and flexible moduli and elongation at break.  By combining a good surface finish and high feature resolution, stereolithography can produce parts that mimic injection moulding for performance and appearance. 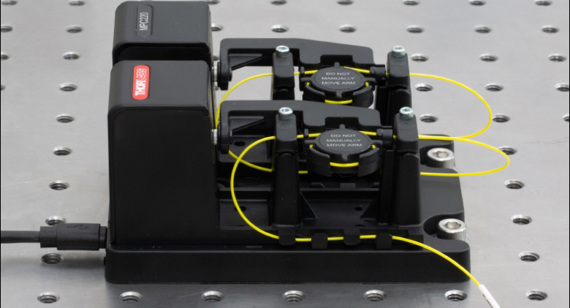 Thorlabs planned to injection mould the final parts using Black ABS as the material because it is a tough plastic with a natural good surface finish. Black ABS is also a good electrical insulator making it an ideal choice for the application.  ABS-like black was used for the prototyping to test their designs, since it not only mimics true ABS’s mechanical properties, but its deep black colour and glossy facing surfaces offer the appearance of a moulded part.

Each new prototype design was delivered in less than a week allowing Thorlabs to quickly test and evaluate every new iteration so that they could ensure that it was right before committing to production.

Once the final design for production was ready, the company placed an initial order of 75 parts for injection moulding. Conventional steel moulds would take between 12 to 15 weeks to produce and are expensive leading to a costly price per part solution for the sort of volumes that the company needed.

Protolabs’ on-demand injection moulding solution offered them an alternative. By using aluminium moulds, they could lower the cost and the price per part and deliver the final parts in a fraction of the time taken by other suppliers.  From production of the moulds to delivery of the ABS plastic parts for the first order took less than five weeks.  Subsequent orders of 100, 150 and 200 parts were all delivered in less than a week.

“By using aluminium moulds we can reduce the time and cost for lower volume production so that specialist manufacturers can place small and medium sized orders at a lower price per part. If you need anything from a few hundred up to twenty thousand injection moulded parts, then our on-demand manufacturing service will save you money and time.”

Offering rapid prototyping and manufacturing using a range of different production technologies means that Protolabs offers a complete product development solution for outsourced parts that can cut lead times by weeks or even months.