Plenty of the parts we build need complex detail if they’re going to do what we want them to, but with a small amount of forethought and some clever design ideas, the detail needn’t be a problem. 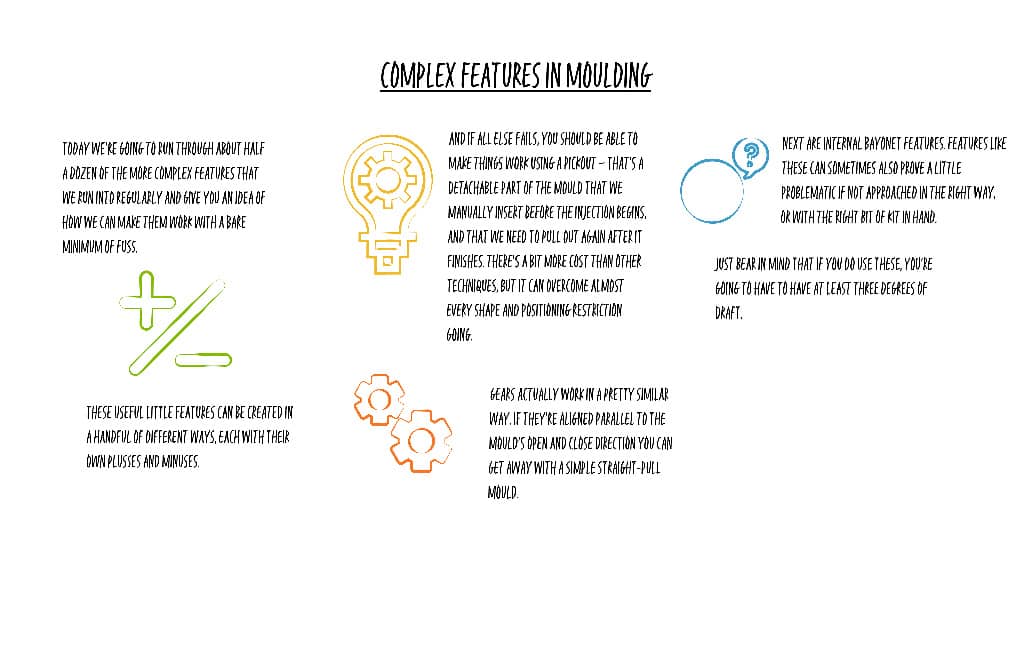 Today we’re going to run through about half a dozen of the more complex features that we run into regularly and give you an idea of how we can make them work with a bare minimum of fuss.

Let’s start with one of the most common features out there – and one featured in our last video – clips. Spring clips for holding things together.

These useful little features can be created in a handful of different ways, each with their own plusses and minuses.

If your design can accommodate a relief hole at the base of the clip and a bit of additional draft, a sliding shutoff design is a cheap and functional way to go.

However, sometimes this just won’t work – for example if there’s no room for the relief hole. In this case we can use a side-action to mould the clip, but this needs to be positioned in a way that allows access from the outer parting line. 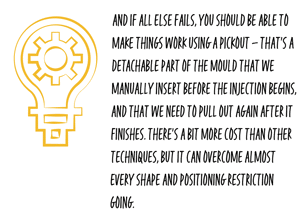 And if all else fails, you should be able to make things work using a pickout – that’s a detachable part of the mould that we manually insert before the injection begins, and that we need to pull out again after it finishes. There’s a bit more cost than other techniques, but it can overcome almost every shape and positioning restriction going.

Next up – lots of parts need text on them. Exactly how complicated this is depends heavily on where exactly you place the text. If you can get it sitting parallel with the mould’s open and close direction, that’s great because it only needs a simple straight-pull mould. If you have text extruded parallel to the parting line, however, that creates undercuts that require a side-action.

Not all is lost, though, because you can work in a cam-operated side-action that operates automatically during the moulding process, cutting down on hassle and cost all at once.

Gears actually work in a pretty similar way. If they’re aligned parallel to the mould’s open and close direction you can get away with a simple straight-pull mould. Just bear in mind that when the gears get deep, the faces on the gear teeth may need to be drafted to allow the gear to eject nice and cleanly from the mould.

Next on our list are bosses – raised features that work with fasteners and support other bits passing through them. Most of them are relatively easy to mould, but the challenge comes when we try and stick them on angled surfaces, or if they’re tall and thin.

The angled ones are probably going to need a pickout, while the lanky ones have a pretty direct solution – we just stick a steel core pin in them to ensure they don’t break during moulding. 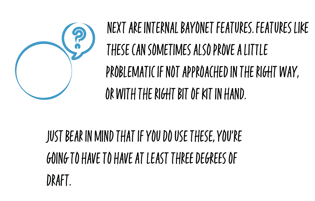 Next are internal bayonet features. Features like these can sometimes also prove a little problematic if not approached in the right way, or with the right bit of kit in hand.

However, we’re able to work them into parts using relief holes and a sliding shutoff. This kind of shutoff actually forms an internal through-hole in parts like these. It brings the A-side and B-side in contact, which works to stop any resin flowing into the through-hole.

Just bear in mind that if you do use these, you’re going to have to have at least three degrees of draft.

Things get a little more complex when we move into the world of bayonets containing an O-ring groove. These are pretty complex bits of design, so making them can require a two-piece pickout, which is a little more money, but it’ll get the job done.

Sometimes, though, depending on its orientation, how close it is to the parting line and whether other features might get in the way, we can make an O-ring feature using two side-actions rather than the pick-out. Similarly, mushroom studs like these are made in much the same way that the O-rings are, with either two-piece pickout or two side-actions.

You’ll probably want to have a chat with your engineer to see if this is going to work. 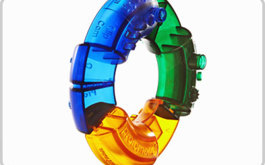 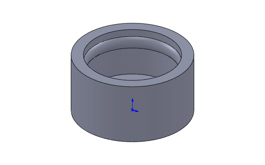 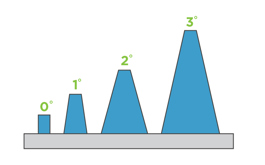