How to Choose the Right 'Boss' For Your Part Design

Building a better boss, a feature raised above a surface, depends on desired functionality

Princeton’s WordNet defines “emboss” as “raise in relief,” and that’s exactly what a boss is: a feature raised above a surface. In plastic parts, bosses are typically used to assist in assembly, as a receptacle for a screw or threaded insert or as the locator for a mating pin on another part.

Because of its function, a boss must have sufficient strength to do its job. This dictates a minimum size for the feature. At the same time, because a boss rises from a surface, it thickens the surface at that point raising the risk of sink or development of voids as the part cools. The challenge: bosses should be big enough to do their job but not big enough to cause avoidable sink in the surface from where they rise. 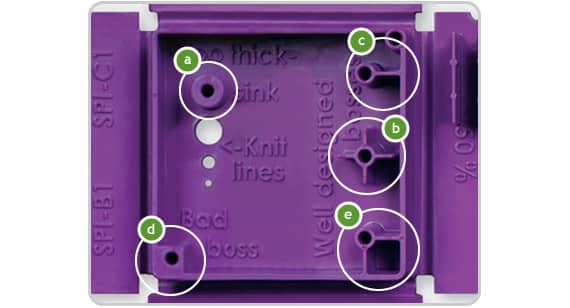 A typical boss is an open-topped cylinder, essentially a round rib (see figure 1a). Standard guidelines suggest that its wall thickness be between 40 and 60 percent of the thickness of the wall from which the boss rises. If your design requires more strength than this guideline would provide, you should consider ways to strengthen the boss without thickening its walls. The most common of these is to surround the boss with gussets to support and strengthen its walls (see figure 1b).

If a boss is part of a vertical wall, it should not create a thick area in the wall. Figure 1c shows an example of how this can be done. Similarly, if a boss is located close to a vertical wall, it may be tempting to tie the boss to the wall by filling the space between the boss and the wall, resulting in a thick area (see figure 1d). A better way to tie the boss to the wall is with one or more ribs (see figure 1e).

In some cases, Protolabs’ milling process may require that the walls of the boss be thicker than the standard 40 to 60 percent mentioned above. Unlike steel tools, which can use steel core pins to form the inside diameter of a boss, Protolabs forms both the outside diameter and the inside diameter of a boss with features of the aluminium mould. When cutting a mould for a relatively tall boss, we may not be able to use a sufficiently small-diameter cutter to create walls that thin. You can avoid the problem by reducing the height of the boss, allowing the use of smaller-diameter cutter. Or you may find that a small amount of sink in the wall surface opposite the boss is acceptable.

There are two additional points to consider in designing bosses. As mentioned earlier, a boss is a circular rib, and like any rib, its walls—both inside and out—must be drafted to facilitate ejection. Depending on the height of the boss, this draft can be anywhere from a half degree to 3 degrees. If draft of the inside diameter of the boss is not acceptable, the boss can be moulded as a solid and the inside diameter drilled, by you, as a secondary operation. Also, because a boss is formed by a blind hole in the mould body, we may have to add vent pins to the rim of the boss to allow the escape of trapped gas during mould filling. Otherwise shorts or burns may form on the rim.

Protolabs' free 3D design cube shows various boss configurations along with many other design capabilities and features of our moulding process. If you don’t already have yours, you can request one.