How to Incorporate Shut-offs in Injection Moulding Design

Shut-offs in straight-pull moulds allow the creation of features such as holes, hooks, and through holes 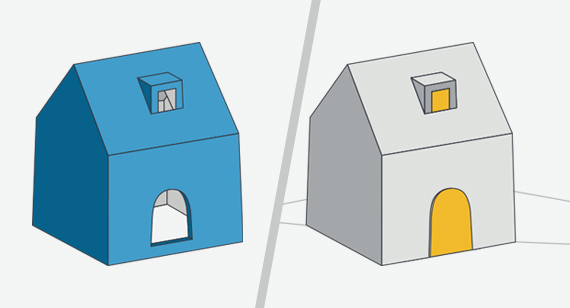 This illustration of an injection-moulded part shows the exterior of the part, left (Figure 1A), and the interior core, right (Figure 1B).

To take a closer look at shut-offs—a design element that allows engineers to solve difficult tooling and design issues—let's consider the injection moulding of a box. The box looks like an A-frame house with four vertical walls and a roof. On one of the vertical walls there is a cut out that would resemble a door and on the roof there is a dormer with a window. See Figure 1a.

The A-side is the exterior of our box and the B-side is the interior core. Figure 1b is the B-side of the mold. In order to create the door and dormer window, the faces of the mould must slide past each other until the mould closes where they create a seal which creates a hole in your part. These are the shut-offs, shown in red in Figure 1b.

Shut-offs in straight-pull moulds will allow you to design many different features that fall in to three basic categories: Holes, hooks, and long through holes without the use of side-actions (cams).

In the illustrations shown in this tip, you will see several  design examples. Let's first go back to the box-like "house" part example. Figure 1A shows the door in our box, or a hole in the wall. The door is formed by a pad that lives on the B-side core (Figure 1B). The pad is the same thickness as the wall section of the part and seals against the vertical wall of the A-side cavity. If this seal is damaged or wears too aggressively, the plastic will sneak past the seal and create flash. The dormer window on the roof of the part is formed the same way, but shows this form of shut off surrounded by plastic.

Shut-offs require greater draft to reduce the amount of wear on the mould and form a better seal under clamping force during moulding. The minimum draft of 3 degrees allows greater clearance for the sealing faces on opposite sides of the mold to pass by one another without the risk of gouging and wear. 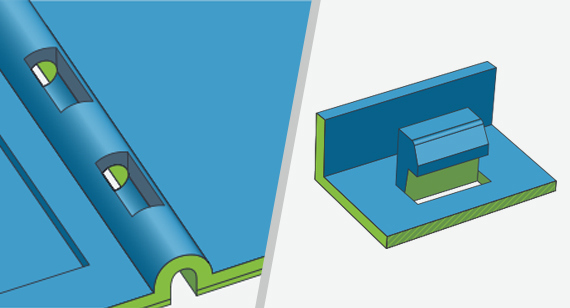 Figure 2A, left, shows a through hole. Figure 2B, right, is a pass-through core.

Figure 2A shows a through hole across a 4 in. (101.6mm) wide part. With side-action pull limitations, you need to be creative at times. Creating a segmented trough on the A-side and a corresponding segmented trough on the B-side creates a series of shut offs that form a through hole across the entire part! Cool huh? This is perfect for hinges, bolt holes, pivot pins, etc.

Figure 2B is the big one. Undercuts, most notably snap features, tend to be no-nos in the world of simple straight-pull rapid injection moulds. A pass through core (square in this instance) is a standing block of aluminium on one side of the mould that mates to a pocket in the opposite side of the mould. One face of the block forms the inside leg of the hook while the other three faces of the block are drafted at 3 degrees and create shut offs against the mating sides in the pocket. Once the mould is opened and the part is ejected, you will have a hook that snaps to your mating part. 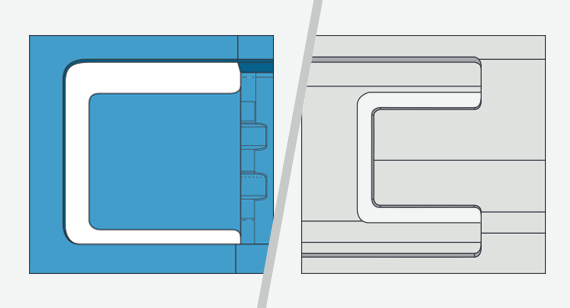 Figures 3A, left, and 3B, right, show the top and bottom views respectively of a clip part, a small section of a much larger complex part.

The final set of illustrations, Figures 3A and 3B, include a top down view of a clip. This image shows the space in between the clip and the pull-through core to build the shut-off. This component part is just a small section of a much larger complex part. 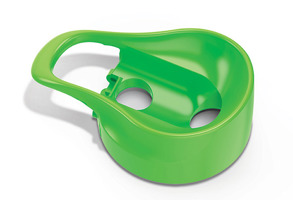 Thank you for downloading our injection moulding design essentials. If you have any issues getting your guide, click here to download. 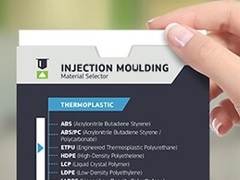 Get an IM Selector