When mulling over mould mods, keep in mind these design elements to save production dollars

The purpose of prototyping is to either confirm that your design is ready for production or to spot problems so you can correct them. If there are problems, you’re probably going to fix them and order new parts. That may require a whole new mould or part of a new mould, or it might be done by simply modifying the existing mould, which will save both money and time. 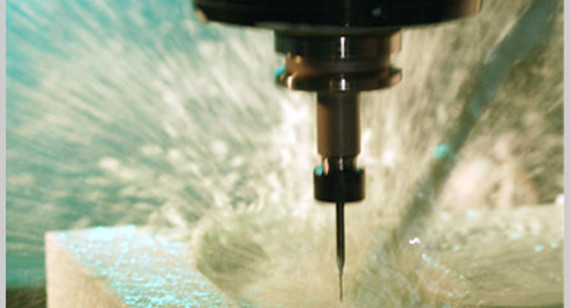 Mould milling in action. Fixing problems in prototypes may require a whole new mould or part of a new mould, or it might be done by modifying the existing mould, which saves time and money.

“Steel Safe” is the common term for changes where material (in many cases steel) can be removed from the mould to tweak a design. Since Protolabs does not necessarily use steel for our moulds, we use the term “metal safe.” If you believe changes to your design may require the mould to be tweaked, you’ll want to try to make your design metal-safe. Since metal can be removed from the mould but not added, voids in your first version that may be changed should start out larger, and masses like ribs, walls, and gussets should start out smaller, than they might be in a modified version. The basic rule is that we can usually add plastic in a mould mod, but we can’t ever take away plastic in a mould mod. Remember, not all changes can be accomplished by modifying an existing mould, as noted below.

Once you determine that you want to try a mould modification, there are a few essential points to keep in mind.

When milling moulds to change part geometry, there are minimum increments by which we can remove metal. For example, we can almost certainly remove 0.25mm of metal from an existing mould, but we may have a hard time removing less than that because of minimum cutting depths needed for milling.

Protolabs' process is designed for speed and cost savings and does not permit extensive modification such as the addition of side-action cams to existing moulds. However, it is often possible to replace an entire side-action if it can be done without changing the rest of the parting line.

Plastic resin shrinks as it cools, and moulds are made oversize so the part will shrink to the desired final size. Different types of resin shrink different amounts. If you are planning to produce prototypes in multiple resins, don’t plan to modify a mould to accommodate different shrink rates. It is difficult, if not impossible, to adjust a mould to accommodate all the dimensional changes that occur when shrink rates change. An easier way to test different resins in one mold is to design for the resin with the highest shrink rate and machine down the parts whose resins shrink less. Then, once you have made your final resin choice, we can cut a mould to match that resin’s shrink rate.

Finally, and this is essential, we cannot anticipate the need for future mould modification if you don’t tell us. As long as your design can be machined into a mould, e.g., there are no “required changes” raised by ProtoQuote, we’ll build the mould according to your design. You need to plan for modification; we’ll be happy to help if you have questions. The good news is that, whether a change requires a new mold or modification of the old one, depending on the nature of the change, we may only have to modify or remake one half of the mold, saving both time and money. That is why it is important to let us in on your design and make sure we are aware of the areas of possible change. Only then can we help you make special accommodations for producing a part that might need to be changed later.

Getting a Mould Modification Quoted

Once you have a mold and you’re thinking of a change, you can see whether your new design can be produced by modifying the existing mould. As always, if you have any questions about undercuts, parting lines, or any of these modifications, please contact our customer service engineers at +44 (0) 1952 683047 or [email protected].