Today we’re going to be taking a look at gates, and how best to deal with them.

Now, if you haven’t run into them quite yet, gates are what we use to get liquid resin from the moulding press into the mould – essentially, they’re the point where we do the injecting part of injection moulding.

They’re a completely and utterly vital part of the process, but they also tend to leave their mark on the parts we make, in the form of blemishes and dimples on the surface.

As there’s no way to avoid using a gate, so our choices are limited to finding the best place to locate the gate and picking the best sort of gate to use. 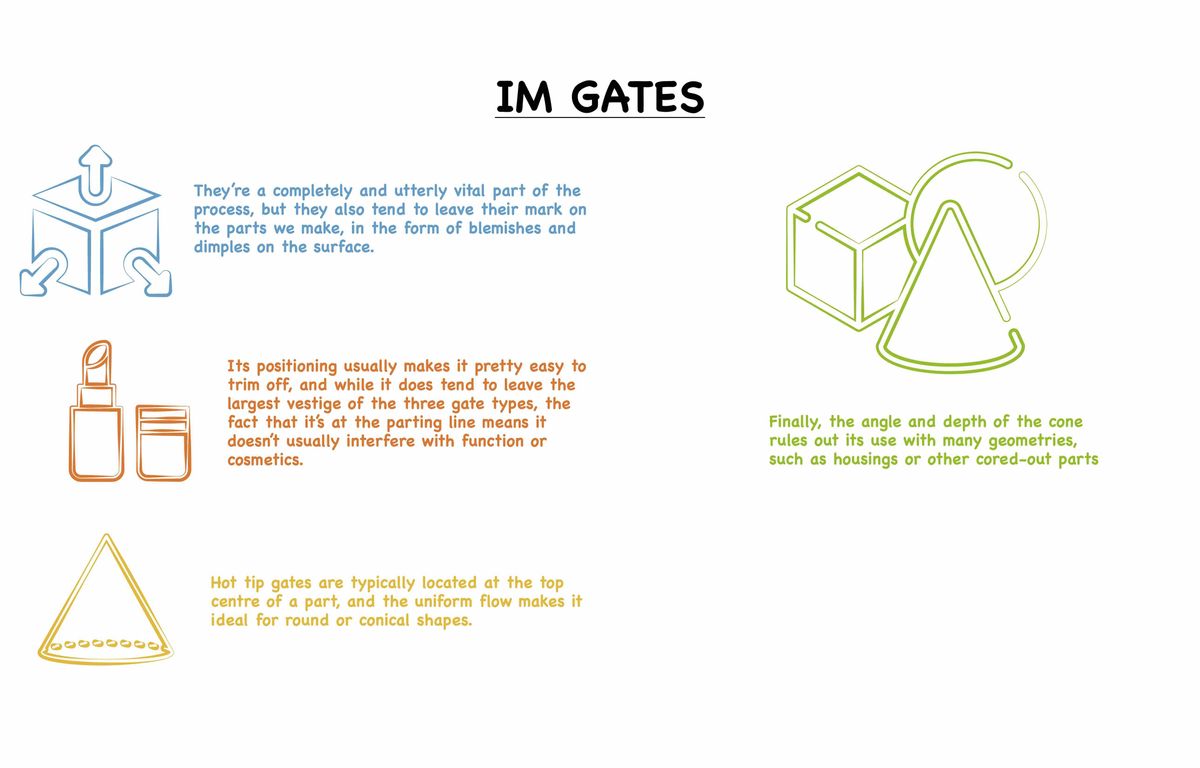 The first part of this is relatively straightforward, as generally you’re just going to want to try and place the gate somewhere that’s usually hidden from view. If you can place it on an area that won’t be seen when the part is in use, you don’t really need to worry about the vestiges it leaves behind.

However, if that isn’t possible you probably need to think a little more about the type of gate you’re using. There are three options here – tab gates, hot tip gates and pin gates.

We’ll start by looking at tab gates, because they’re by far the most common of the three.

These consist of a block that’s milled into the parting line on one of the part’s thicker walls, allowing the liquid plastic to be pushed into the mould. Its positioning usually makes it pretty easy to trim off, and while it does tend to leave the largest vestige of the three gate types, the fact that it’s at the parting line means it doesn’t usually interfere with function or cosmetics.

The tab gate is easy to manufacture, maintain, and process, and there’s generally a great deal of latitude in its placement along the parting line. The design also helps confine the stress generated during the ejection process to the tab itself, which is trimmed off after moulding. Also, being relatively large, it is ideal for use with filled resins, which can be difficult to inject through smaller gates.

Of course, being large is also a bit of a downside, as that’s the cause for its bigger vestige, and the fact that it has to be located on the parting line can mean it isn’t the right choice for every part.

Which brings us rather neatly along to option number two – the hot tip gate.

This technique uses a small, circular gate to let plastic into the cavity. It gets its name from the fact that we bolt a little heater to the mould to keep the resin hot enough to flow through the relatively narrow gate hole.

Hot tip gates are typically located at the top centre of a part, and the uniform flow makes it ideal for round or conical shapes. The gate leaves a small raised nub on the surface of the part, but adding a dimple to your design may help shift the nub below the surface of the part, which might allow something like a decal to be applied over it with little or no need for trimming beforehand.

However, there are some materials, such as acetal and glass-filled resins, that are not compatible with hot tip gates, and you should also be aware that small volume parts may be problematic because of the tendency of resin to "cook" in the hot tip longer.

In addition, once you use a hot tip gate you can’t really move it, as that would require remaking the entire A side of the mould.

Finally, we have pin gates. These are the least common type of gate and are typically used for complex parts that cannot have gate vestiges on the edges, where tab gates would be, or on the cosmetic side of the part, where hot tip gates are located. 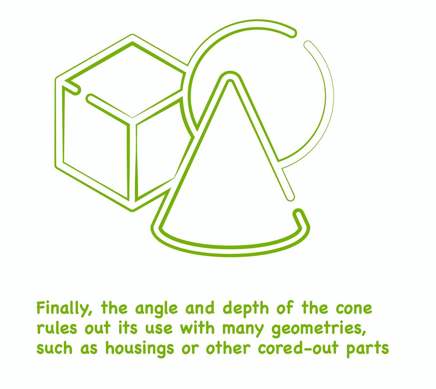 Pin gates work by injecting resin into the ejector pin channel, leaving behind a post that can be manually removed after the part is completed. This means that it leaves a vestige shaped like the ejector pin, but you can trim this down until it’s very small.

The use of the pin gate is very geometry-dependent, and while it can produce excellent results, it can be challenging to process. The cone-shaped tunnel gate precludes the use of many glass-filled resins, and the shearing of the cone from the post during ejection can place significant stress on the mould. Finally, the angle and depth of the cone rules out its use with many geometries, such as housings or other cored-out parts. 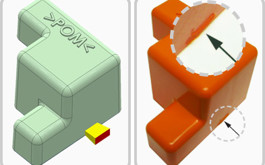