There’s an important but often overlooked material consideration when designing parts for plastic injection moulding. It’s called Tg, short for glass transition temperature. We’ll get into the science behind it all later, but for now, just know that there is a temperature where amorphous materials transition from a glassy/rigid state to a leathery/rubbery state.

What is Glass Transition Temperature (Tg)? 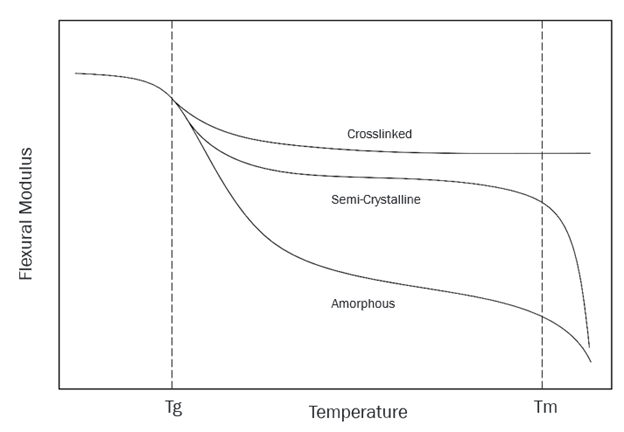 In order to take apart the watch on this, it’s necessary to revisit high school chemistry class. Don’t worry, though; it won’t take long. We’ll begin on the first day, when the teacher poses the question: what are polymers? The brainiac sitting up front who studies ancient languages for fun knows that “poly” and “mer” are the Greek words for “many parts” and therefore pipes up with “polymers are long chains of smaller molecules joined together through a process called polymerisation, and whose molecular weight ranges from the hundreds to hundreds of thousands.” Congratulations.

But what’s molecular weight, anyway? More importantly, who cares? Anyone designing plastic parts should. Any polymer’s molecular weight determines the length of the “long chains” just mentioned and, therefore, its physical characteristics. For example, where a hydrogen molecule “weighs” just 1.01 g/mol (molar mass) and one of carbon weighs 12.01 g/mol, a single molecule of high-density polyethylene (HDPE)—which is nothing more than a linked series of these two molecules—can weigh in at 250,000 g/mol or more.

Whether it’s polyethylene terephthalate (PET) molecules that range from 8,000 to 31,000 g/mol or polystyrene (PS) molecules at a whopping 400,000 g/mol, these centipede-like chains of monomers—which are the building blocks of polymers—arrange themselves into either amorphous or semi-crystalline structures.

Amorphous polymers have random / disordered chain structure. Below Tg, they are hard and brittle. As heat is applied, they gradually begin to soften to a point they become leathery/rubbery. This transition is the glass transition. Continue to apply heat and they gradually grow molten (mouldable), having passed through the Tg up to a temperature where the polymer begins to exhibit viscous flow. Common examples of amorphous polymers include hard, rigid materials such as polystyrene (PS) and polymethyl methacrylate (PMMA), which are used in their glassy state and well below their glass transition temperatures.

Thermoset polymers have crosslinks tying their chains together. These crosslinks form between the chains, turning them into one big molecule. Think about that the next time you’re holding a bowling ball. Crosslinks provide a robust chain structure that allows elastomeric materials such as liquid silicone rubber to be used well above their Tg. Other thermoset materials are typically used below their Tg and are quite rigid, such as phenolics. Crosslinks form bonds between the molecular chains that are so strong the melting point for thermoset materials is above its decomposition temperature.

Amorphous polymers are often transparent (polycarbonate and acrylic are two examples) rather than opaque like most semi-crystalline materials. They typically have better dimensional stability and are less likely to warp during the moulding process. They’re generally resistant to hot water and steam (think plumbing materials) and have good stiffness and impact strength. And as explained earlier, they tend to gradually soften when exposed to heat.

Semi-crystalline thermoplastics, due to their internal structure, boast very strong molecular bonds. This attribute makes them resistant to chemical attack. Like Teflon, many also provide a low coefficient of friction, so are a good choice for bearing and wear surfaces or where heavy structural loading is a concern. They are also much more fatigue-resistant than amorphous polymers. They will soften when exposed to heat but can be used above their Tg due to the crystalline regions retaining structure until the polymer’s melting temperature.

Thermoset materials, with their crosslinked internal structure, display very good chemical resistance, dimensional stability, and heat resistance. Thermosets range from clear to opaque as well as elastomeric to rigid.  They can be used below or above their Tg, and do not have a melting point.

It's a complex topic, to be sure. We hope this fairly technical explanation helped reduce confusion on the topic. Have an injection moulding project in the works? Reach out at +44 (0) 1952 683047 or [email protected]. We’re always happy to geek out on polymers.