Eyeing the Future of Fitness Tracking

When you think about it, eyeglasses have already been one of the most successful pieces of wearable technology for more than 700 years. So, in this age of wearables, adding a health-tracking capability to a pair of glasses makes sense.

That’s the concept behind eyeglasses that have a fitness tracker built in, a prototype design initiative called Project Genesis that’s being developed by VSP Global. A California-based vision care company, VSP Global includes an eyewear manufacturing and design division, plus a vision insurance plan that encompasses more than 80 million members and a network of 34,000 eye doctors in the United States, United Kingdom, Ireland, and Australia.

Project Genesis is a venture of VSP Global’s innovation lab, The Shop and has been in development for more than two years, says Adam Oranchak, 3D engineer, who works in the New York lab location. Innovation labs are also located in California and Ohio. 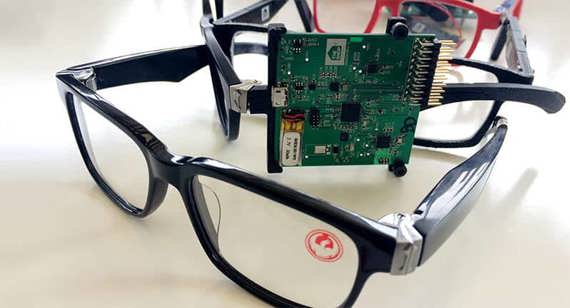 The added electronics for the fitness tracker were embedded into a fixture in the left temple of the eyeglasses.

Oranchak, who has a bachelor’s degree in materials engineering and a master’s in industrial design, has done extensive CAD-related work and design. As someone active in his industry, he says he knew about Protolabs and decided its broad experience in prototyping would fit well with Project Genesis and the challenge of creating a prototype of a pair of glasses with a fitness tracker built in to the frames.

Right from the quoting stage, Protolabs proved to be a valuable partner. “The quoting system was helpful—I liked the feedback that pointed out potential issues in a nice 3D way, and we could then adjust accordingly,” Oranchak says, referring to the design for manufacturability (DFM) analysis element of Protolabs’ interactive system.

For example, Oranchak explains, the parts being designed had a slide component when they were first put together. Oranchak says the DFM analysis highlighted the fact that the parts didn’t take full advantage of the slide direction that he had intended, “so there was the opportunity, through the DFM, to have some back and forth feedback” on improving the slide function.

“In innovation, speed is everything...Protolabs’ turnaround on the parts was incredible.”

Another challenge Oranchak was facing, he says, was an ambitious timetable, not an uncommon conundrum for design engineers. Fortunately, he adds, working with Protolabs meant fast quotes and fast parts. “In the early stages of these types of projects, being fast is super important,” says Oranchak. “In innovation, speed is everything…Protolabs’ turnaround on the parts was incredible.” 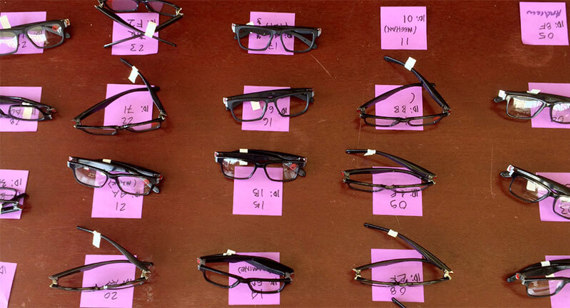 For prototype testing, 30 pairs of glasses had the fitness tracker seamlessly built into them.

Given that Project Genesis would be VSP Global’s “first foray” into electronics as an eyewear company, Oranchak says he and his colleagues wanted to test the concept in a small group, which, as it turns out, would be 30 volunteers within the company who would wear these prototype glasses. So, 30 pairs of identical glasses would be needed.

Several iterations were first done on an in-house, polyjet (material jetting), 3D printer at Oranchak’s lab, before moving on to Protolabs for plastic injection-moulded parts. Injection moulding made the most sense, Oranchak says, because the material would be closer to what the end-use product would be made from going forward. Ultimately, Protolabs produced about 100 total parts for this project.

Existing VSP eyewear frames were chosen for this project. The fronts and both temples (arms) were from the original frames so that they matched. The hinges had to be modified and bonded into place in a specially designed fixture that would contain the added electronics of the fitness tracker. Black ABS was chosen for the material, Oranchak says, because he and Protolabs’ customer service engineers thought this material would fill easier and reduce shrinkage and sink marks.

Proving Out the Concept

Thirty pairs of eyeglasses that have a fitness tracker “seamlessly” built in to them were then worn and tested by company volunteers. The fitness tracker is Bluetooth enabled, can communicate with a smart phone and measures volunteers’ steps, calories burned, activity time and distance travelled, much like other fitness trackers.

“The advantage to having this on your head and not wrist is that it is at the centre of your body mass, so the tracker picks up more accurate readings,” Oranchak says. “It is at least as good as, if not better than, other fitness trackers on the market...There’s really nothing like this on the market right now.” 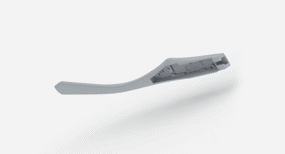 This CAD model shows the specially designed fixture cavity that would contain the added electronics for the fitness tracker.

Moreover, Oranchak says, a lot of effort went into designing a product that shows “no trace of the electronics when you are wearing them.” “That’s a key piece of our philosophy. We are an eyewear design centre; we are keen on making a pair of glasses that people would be comfortable wearing in public. People don’t want to be wearing something where the electronics are noticeable.”

This alpha stage of testing and prototyping has proven VSP Global’s concept, according to Oranchak, and has prompted the company to move ahead with its next development (beta) phase, before moving into full-scale production.

Protolabs continues to work with Oranchak and VSP Global on this next development phase.