When developing parts for plastic injection moulding, applying draft (or a taper) to the faces of the part is critical to improving the mouldability of your part. Without it, parts run the risk of poor cosmetic finishes, and may bend, break, or warp due to moulding stresses caused by the plastic cooling. Equally important, an absence of draft may prevent parts from ejecting from the mould, damaging not only the parts, but possibly the mould itself—a costly and time-consuming detour.

Here are five ways that draft can improve part mouldability. 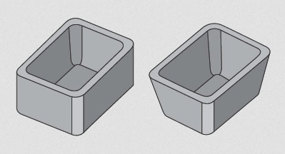 Ignoring draft early in the design process is a common mistake that occurs when prototyping with 3D printing and CNC machining processes where draft is not required. Because of the layer-by-layer method in which 3D-printed parts are built, nearly any design can be produced with limited concern for mouldability. The same can be said for machined parts as part ejection is a purely a moulding consideration.

But if a prototype design will eventually move to injection moulding, it is befitting to design draft into parts from the very beginning. Draft may alter the form and fit of a part during assembly and its overall aesthetic, so designing in draft, even when it’s not technically needed, can help you avoid any surprises such as costly redesigns and additional prototype development.

Design for the future need, not the current need. When the part is ready to move from 3D printing or machining into injection moulding with draft already integrated, design is accelerated and production can begin sooner. Don’t print or machine yourself into a corner by manufacturing a product that needs more design work before it can be moulded.

The truth is no single draft angle can be applied to all part designs. Factors like wall thickness, material selection, ejection, shrink rates, finish/texture, wall depth, and manufacturing capabilities all come into play. But fear not, there are some simple rules that can be followed that can help.

When designing a part, apply as much draft angle as possible—a general rule of thumb is 1 degree of draft per 1 inch of cavity depth, but that can change with the aforementioned factors. Try following these general guidelines: 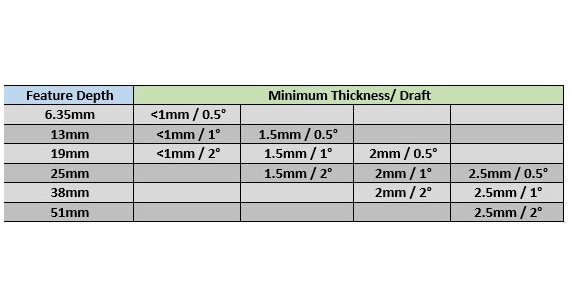 Draft angles based on cavity depth and feature thickness (width of rib being machined). While conservative numbers are used to explain the relationship between wall thickness, depth and draft, using this chart can drastically improve mouldability.

What can be done when draft may negatively impact part performance? Parts can be designed with 0.5 degrees of draft, or even as little as 0.25 degrees, which is still an improvement over zero draft. Again, the smallest degree of draft that is possible is dependent on material, part geometry, and manufacturer and should be discussed with the manufacturer before finalising a part with very limited draft.

Many low-volume injection tools are manufactured from aluminium and use CNC machining to mill nearly all of the features in the core and cavities of the mould. With fewer manufactured parts and inserts than a steel production mould, additional draft and wall thickness may be required to produce the same parts with an aluminium mould due to the diameter, length and draft of the end mills that are used to create them. The increase in draft and thickness typically won’t affect the parts, and it may actually improve the performance of eventual production mould. 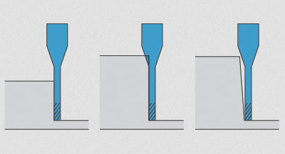 How does draft affect parts finish? Simply put, with a lack of mould draft, the part would drag on the moulded surface while the mould opens and ejects the parts, creating surface finish scratches. Since all thermoplastics shrink while they cool in the mould, a massive amount of surface tension is created, preventing the part from releasing cleanly during ejection. This tension creates small scratches in the polished surface, and it’s even worse for textured surfaces—if draft is missing.

Texture is applied many different ways, but they all create micro undercuts from pitting the mould surface. The texture on the mould walls would lock the part into place, if it weren’t for our old friend, draft. By applying a degree of draft, the part is allowed to move a short distance before the mould shrink is able to clear the micro undercuts, and ultimately the concern of mould drag or scratches on the part is minimised. On finishes, Protolabs requires a minimum of 3 degrees of draft for a light bead-blast finish (PM-T1) and 5 degrees of draft for a medium bead-blast finish (PM-T2).

Protolabs can apply seven different finishes to thermoplastic moulds that range from unfinished to highly polished and even textured surfaces. 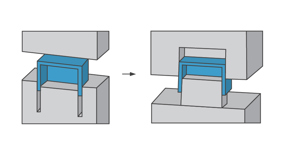 Adding draft to an enclosure can create issues if it isn’t applied correctly. When applying draft to the inside and outside walls, design these walls parallel to each other to avoid deep ribs in the mould that make venting, ejection, mould finishing, and manufacturing more difficult. Consider a core-cavity approach to design as this opens up the mould cavity and core for polishing, accelerates manufacturing speed and, in general, brings added ease during the moulding process.

One of the most valuable tools available at Protolabs is our free design for manufacturability (DFM) analysis that is provided on every 3D CAD model that is uploaded to our site. Within a few hours, you’ll receive a quote that highlights detailed sections of the model in need of draft angles, and even offers suggested changes to improve the draft on those sections. It’s a good quality control check to help avoid future mouldability issues.

Upload a 3D CAD for a complete analysis at protolabs.co.uk. For questions on draft and technical concerns, please contact one of our knowledgeable applications engineers at [email protected] or +44 (0) 1952 683047.