Jeremy Corbyn, leader of the Labour Party, visited digital manufacturer, Protolabs in Shropshire on Tuesday 24th July as part of Labour’s campaign focusing on boosting manufacturing in the UK. The visit followed a speech given by the Labour leader at the EEF, the manufacturers organisation in Birmingham, where he outlined Labour’s plans for reviving Britain’s industrial base following Brexit.

In the speech, Corbyn described years of government policy that has favoured growth in service industries, before setting out Labour’s position that would ensure the state used more of its own money to buy in Britain. The speech included the following from Corbyn: “To ensure prosperity here, we must be supporting our industries, making sure that where possible the government is backing our industries.”

Later on, at Protolabs’ 108,000 sq. ft. facility in Telford, the Labour leader met with Bjoern Klaas, Vice President and Managing Director of Protolabs, Europe, along with other key members of the company. When pressed on the issue of potentially confining UK manufacturing, Corbyn stated:

“I have drawn a comparison with Germany which has a bigger manufacturing base and a lot more proactive government support for manufacturing. In Britain there has been much less support, which has meant that we’ve become more of a financial services economy. It’s not economic nationalism, so much as saying that we could do far more here.”

“We do have problems. One is skilled workers and supply, the other is lack of investment capital in manufacturing because investment largely goes into property speculation. It’s about rebalancing. If, for example, somebody came along and wanted to set up a company like Protolabs here in Telford, with a completely new idea, where would they get the finance for it? Who would back them for it? There’s probably nobody, so they’d sell their idea to China or India and we’d then import the product later on.”

“This is about supporting innovation here. As a country we cannot put the borders up because we are a trading country. We are a trading nation and we always have been. The balance has to be struck. It’s not about saying to a global company like BMW you’re not welcome here. Quite the opposite. What we would say is that we want you to be here, but we also want you to be here for the long term, investing in research and training.”

“We’re also saying the public sector could do a lot more when it buys, making sure it improves local communities. Local authorities buying in goods and services can do much more to develop their local community. Preston, an example of quite high employment, lost a lot of manufacturing jobs. The council, a big employer and big purchaser has an avowedly local policy which has helped regeneration locally. It’s a balance, yes, and you’ve got to be careful how far you go with it.”

“Regional investment is also required to ensure we get the smaller infrastructure needs: roads, railways, etc., but also a preparedness to support or guarantee investment and loans into developing companies in areas like Telford.”

“Regional investment is also required to ensure we get the smaller infrastructure needs: roads, railways, etc., but also a preparedness to support or guarantee investment and loans into developing companies in areas like Telford.”

The Labour leader was then given an extensive tour of the Protolabs digital manufacturing facility, which demonstrated itself as a world leader in low-volume manufacturing and custom prototyping. 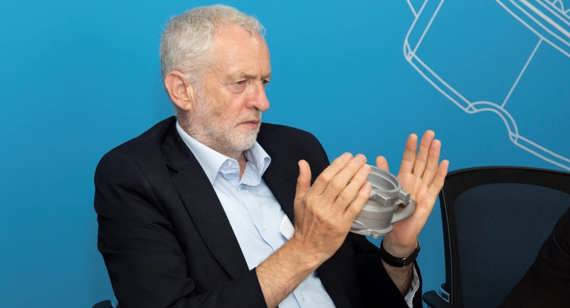