We love inventors – and inventions – here at Protolabs 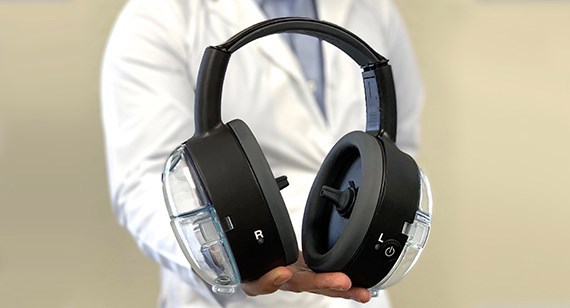 Nothing gives us more pleasure than helping someone turn their fabulous idea into reality in double-quick time, and then sending it out into the world and watching it fly.

In fact, our colleagues in America are so fond of innovation that they created their own Cool Idea Awards to help fund and support the very best of them.

Each year in the US, the programme awards an aggregate of up to $250,000 in Protolabs manufacturing services to innovative thinkers who can use their grant towards building prototypes or even an initial production run.

The latest winner is a start-up company from Tucson, Arizona, called SafKan. They have developed new automated ear-wax removing headphones for clinical use called OtoSet, which can professionally clean ears in just 35 seconds.

We helped with in-kind machining and industrial-grade 3D printing services so that SafKan was able to successfully meet various customization requirements during OtoSet’s trial stage.

It has now completed two clinical trials and is set to be introduced soon in a beta programme in several cities including Seattle, San Francisco, Los Angeles, Tucson, Houston, and Philadelphia.

It might not sound terribly glamorous, but this is a real breakthrough in an important clinical area. Every year more than 12 million Americans visit their doctor for complaints related to impacted earwax, causing problems such as tinnitus, discharge, cough, or hearing loss.

So, we like to think we have helped develop a real solution to a huge problem which will bring relief for millions of people over the next few years.

As our US President and CEO Vicki Holt says:

“When the opportunity comes to support amazing products like OtoSet — devices that are solving real problems for its users — I’m more than thrilled with the fact that we can provide a manufacturing grant to do that.”

And – if you forgive the pun – if you keep your own ears pricked, we might soon have some news which could help great innovators turn their dreams into reality on this side of the Atlantic.