In 2014 2045Tech, an innovative start-up business based in Padova, Italy, won a Protolabs Cool Idea Award to bring its ‘Floome’ initiative to life.  Utilising the Award ‘service grant’, 2045Tech was able to manufacture Floome and bring this product to market far ahead of the expected schedule.

Fast forward two years to 2016 and 2045Tech has evolved its Award winning ‘Floome’ design and is launching the next generation model, Floome IT, with manufacturing support still provided by Protolabs. 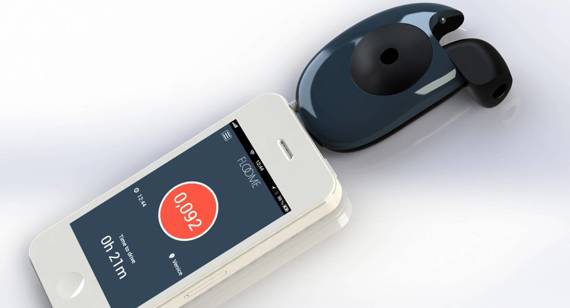 A solution to a real problem

The idea behind Floome came from two engineers from Padova - Fabio Penzo and Marco Barbetta – who founded 2045Tech.  Their innovative winning concept was the development of the first reliable breathalyser that people can use anywhere in the world.

Since first launching to market, Fabio Penzo, Co-founder and CEO of 2045Tech, comments, “We now have more than 20,000 active users in more than 40 countries who use Floome to check they are in a safe condition to drive.”

Floome is a pocket product approximately the size of a modern car key.  The design has a silicon mouthpiece which transfers the user’s breath directly into Floome.  By attaching Floome to a smartphone via a cable and jack, the product is able to identify whether the user’s blood alcohol level is within the legal level to drive.

Floome helps drivers make intelligent decisions. Based on the location of the vehicle and personal information of the driver (provided during registration), Floome can determine whether a driver is within the legal limit to drive in multiple countries. For example, the legal limit can vary depending on a person’s age, physique and number of years legally driving. Floome is also intelligent enough to estimate the time needed for the blood alcohol level to reduce below the legal limit, or it can call a taxi or a designated friend, or advise the user that the body requires sustenance.  During 2016 alone, Floome’s monitoring portal (where all the test data is collected, confidentially) received approximately 110,000 readings from users. 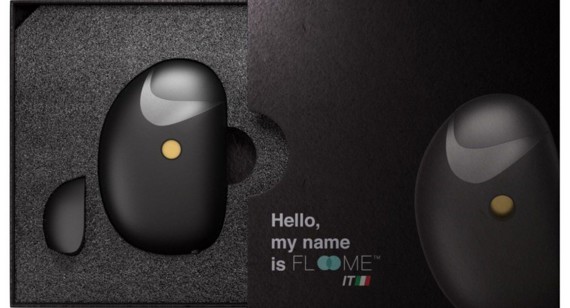 How does it work?

Technically, the user breathes into Floome, which contains a chamber with a fuel cell that converts the breath into an electrical impulse.  The chamber then creates a vortex of air which makes a sound, the tone of which indicates the quality of breath entered.  The alcohol level in the blood, indicated by two values, is combined with the user’s physical characteristics to calculate whether the user is in a suitable condition to drive.  The result is displayed via the driver’s smartphone.

“The advantages of Floome has been noticed; we are now working with a notable European insurer on an incentive scheme to encourage and reward drivers not to drive under the influence of alcohol. Additionally, transport companies have indicated their interest in supplying Floome to their own drivers to prevent the risk of driving while drunk and to make everyone safer,” explains Fabio Penza

Since the initial concept, the design and production of Floome progressed rapidly.  The relationship with Protolabs began when Marco Barbetta, 2045Tech Co-Founder and CTO needed to evolve his ‘Proof of Concept’, which he jokingly nicknamed his “Frankenstein” model, into an attractive prototype that could be publicly presented, quickly. For the product design, 2045Tech worked with Caterina Falleni and Allessandro Innocenti.  In three weeks and six attempts they defined the look and feel of Floome.

"I am still hugely grateful to Protolabs for the support provided via the Cool Idea award, and the manufacture of Floome using rapid injection moulding, which helped us gain at least four months on the standard time to market.”

For the parts to be produced, the manufacturer had to be fast and flexible. Following online research, Protolabs was contacted and, after discussing the requirements with Stefano Mosca, Technical Sales Manager for Protolabs in Italy, 2045Tech decided to enter Floome in the 4th Cool Idea competition (hosted by Protolabs), which it won.

Penzo continued, "I am still hugely grateful to Protolabs for the support provided via the Cool Idea award, and the manufacture of Floome using rapid injection moulding, which helped us gain at least four months on the standard time to market.”

"As a Cool Idea Award winner, our prize was a production service grant which enabled the construction of a thousand parts of the seven different components that form Floome, in addition to expert consultation on the best materials to use—for example Floome contains ethanol, so the material needed to be suitable for contact with this substance—and the mechanics of the parts. Without the support from Protolabs we could not have presented Floome as a finished production product (rather than a prototype) to our ‘angel’ Investor who funded our first year of activity.” Penzo added.

The collaboration between 2045Tech and Protolabs continues today.  In June 2017, Protolabs manufactured the new Floome IT cases.  The new cases feature an eye-catching, ergonomic design using a soft material, making it much more pleasing to the touch.  As Floome and 2045Tech evolve, so will the relationship with Protolabs as their trusted manufacturing supplier.