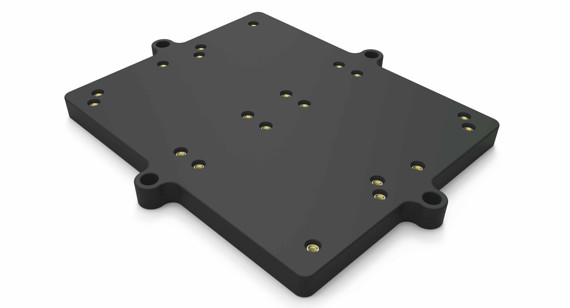 Harris Corporation, a government and commercial contractor, turned to Protolabs’ insert moulding service to make these customisable plastic fixtures for the varying geometry of different circuit boards the company is testing for eventual use.

Testing circuit boards is a critical process at Harris Corporation, a leading government, defence, and commercial contractor specialising in communication, space and intelligence, and electronic systems. That testing now is faster and less expensive, earning recognition from the company’s own Business Excellence Program—all with help from Protolabs’ insert moulding process.

Based in Melbourne, Fla., Harris describes its vast offerings as reaching “from ocean to orbit and everywhere in between.” Harris’ product and service lineup includes tactical communications, air traffic management, and satellite payload solutions. Founded in 1895, Harris currently has $6 billion in annual revenue, more than 10,000 employees, and customers in more than 100 countries.

During qualification testing, circuit boards go through steps including several hours running on a vibration test bed, something like “a paint shaker on steroids,” according to Michael Murray, principal mechanical engineer in Specialty Applications at Harris. “We want to run them through a battery of tests to ensure that we have high-quality manufacturing of our boards,” Murray said.

Finding the best way to secure the circuit boards to a large metal plate on the vibration tester became a recurring issue, Murray said.

Machining the plate and attaching the circuit boards directly to the plates was costly and the machined attachment points didn’t necessarily align with those on different boards used in subsequent testing.

Murray then developed plastic test fixtures that could hold a number of boards and bolting the fixtures onto the vibration tester. He enlisted Protolabs’ rapid injection molding service to make the fixtures, which are customizable to the varying geometry of different boards. (The fixtures are made of Cycoloy, a PC/ABS resin that Murray said Harris uses in some product enclosures and that he said he likes for its aesthetics and mechanical and thermal performance.)

Attaching circuit boards to the plastic fixtures—with screws from 1 to about 2 millimeters in diameter, with corresponding nuts—proved tedious and time-consuming, Murray said. Adding threaded brass inserts into the bosses on the test fixtures helped somewhat, enabling technicians to use screws alone to secure each board.

But that required a slow, secondary step of installing each insert manually with a thermal press at Harris’ facility, in a process known as heat staking. For a test run of 100 circuit boards, Murray said, that meant first installing 500 small inserts—one at a time, all by hand. And that was before getting out the screwdrivers to fasten the circuit boards to the test fixtures.

“The process is labour intensive,” Murray said. “It uses small screws, small inserts, and you kind of have to use tweezers to set them in place. It can become tedious after doing it for many hours.” The painstaking work could take technicians several days to complete, he said. As fatigue mounted, “sanity breaks” sometimes were in order. 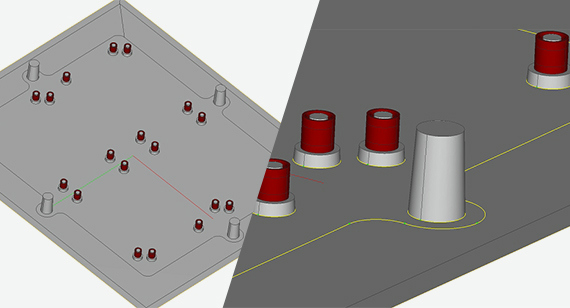 For this insert-moulded part, the mould cavity (grey) contains 20 posts (see image at left). The inserts (red) are placed over the posts while the mould is open (see image at right). The mould then closes and the opposing side of the mould holds the inserts down tight while the plastic is moulded around them. After the mould opens, the parts are ejected and 20 more inserts are hand-loaded onto the cores to repeat the moulding process

With Harris as a Protolabs’ early adoption partner, Murray was eager to be among the first to try Protolabs’ new rapid insert moulding service, which the company added last year in response to customer requests.

Insert moulding involves placing a preformed component—typically a metal part—into a mould and then injecting thermoplastic into the mould to form the finished part. The metal reinforces the mechanical properties of the plastic. Insert moulding also eliminates the need for a secondary process such as heat staking or ultrasonic welding to install the insert into an as-moulded part.

In Harris’ case, Protolabs’ insert moulding enabled Murray to have all of the brass inserts moulded into the test fixtures—20 inserts into each of dozens of 6-by-6-inch fixtures—in one step before he received them. That freed technicians from using the hand-operated thermal press to place each insert individually.

“Obviously, having the inserts moulded in the part from the get-go was a huge advantage to us because the parts are ready to go out of the box,” Murray said.

Another advantage, Murray said, is getting insert moulded parts within 15 days, positioning Protolabs as an on-demand manufacturer that can meet his aggressive timetable. A traditional moulder, in contrast, typically would need two to three months to deliver insert moulded parts.

Adapting the design of the plastic test fixtures for insert moulding required only minor tweaks, Murray said. He based the changes on feedback from Protolabs’ design for manufacturability (DFM) analysis and a conversation with a Protolabs engineer.

Another advantage, Murray said, is getting insert moulded parts within 15 days, positioning Protolabs as an on-demand manufacturer that can meet his aggressive timetable.

From a total cost of ownership perspective, the labour savings Harris realises from insert moulding the plastic fixtures more than offsets the slightly higher cost of the parts and tooling, Murray said. Having moulded-in inserts saves two or more full days of labour by eliminating the process of manually installing the inserts in the test fixtures.

“The net was definitely savings compared to our labour cost,” Murray said. “It was more efficient in our testing as well. I’m able to get started sooner. My technicians definitely are happy.”

“[The switch to rapid insert moulding] was identified and recognised as a cost and time savings that ultimately will carry forward on future stuff we do,” Murray said. “Another engineer who sees that might also be willing to try (insert moulding).”

“[The switch to rapid insert-moulding] was identified and recognised as a cost and time savings that ultimately will carry forward on future stuff we do.”

For his part, Murray will continue to use insert moulding for test fixtures, prototyping, and low-volume production of final products. “In some cases, the features that I’m using to mount the circuit board on this fixture are nearly identical to the features that are used in the final enclosure,” Murray said. “So it’s also a way to test out and prove our design at the board level.”

Murray admitted to pushing the limits of Protolabs’ design and tooling rules as a frequent customer over the past 13 years, including the last eight at Harris.

“We try to design things that Protolabs may not have done before,” Murray said. “Obviously they’re listening to their customers’ needs and trying to improve their processes to adapt to meeting those needs.”